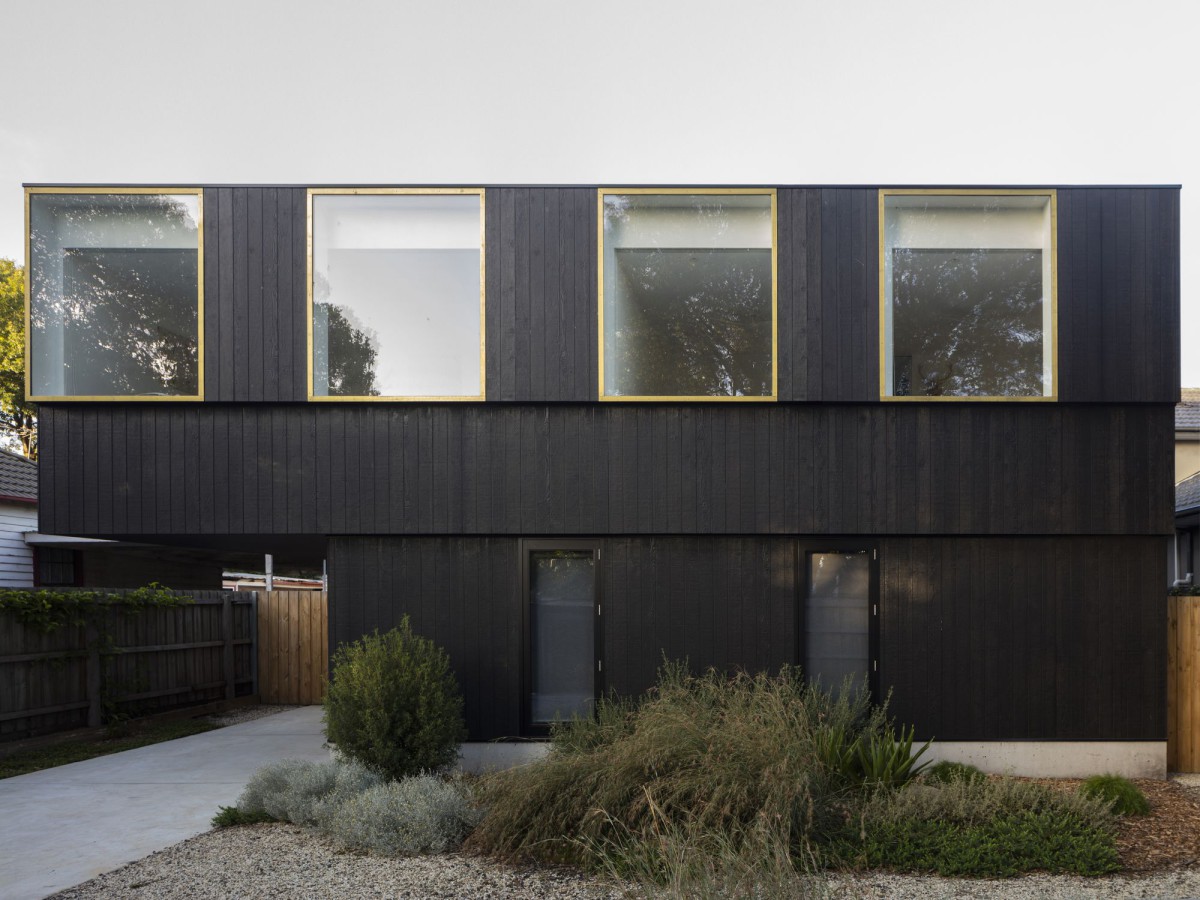 While the rear of houses were characterised by the location of ‘lean-to’ kitchens, laundries and toilets opening on to a yard that supported so many of their functions, the frontages of houses provided a very direct contrast. The design of early 20th Century houses (and indeed many other buildings) had long understood the importance of facade. It was on the front elevation of housing that poorly laid brickwork was disguised by tuck pointing. It was the front verandah that displayed the intricate carpentry required for laddering and spindling. Front windows and doors used leadlights as a form of decoration and entrances were corbelled and coined to embellish their significance. These treatments are all indicative of the importance of ‘appearances’ for the early suburban dwellers and their front gardens evolved to complement the values they espoused in their buildings.
Richard Weller

Within this physical and cultural context, the establishment of the façade of this project is an act of resistance, an overt aesthetic provocation.

Rather than conforming to suburban scenic norms, the appearance of the building is defined in large part by the fourfold repetition of an identical window element. All other façade articulation is carefully detailed to recede into the homogenous ground of the vertical black timber cladding. While each window pops on the façade – with the white interior enabling maximum colour contrast and the single profligate flourish of the project, the gleam of big brass glazing restraint beads.

The repeated motif positions the building as more institutional than suburban, the façade composition akin to the arrangement utilised in larger buildings. We delight in a comment on an instagram post of the project: I’ve driven past this project several times, I thought it was accidentally great…

But the façade articulation is not simply intended to be contextually disruptive. The generative reasoning runs deeper than this. We have adopted this particular façade composition as a way of demonstrating an aesthetic of adaptability.

An earlier project of our practice was called 3×2≠3+3. The name related to the six alternating squares of glass/solid timber on the rear façade and the mismatched relationship of that façade to the two storey interior, with each floor 3m in height. In commentary around that project, we explored the poché condition that is established to mediate between the interior and exterior condition. To some extent that particular type of poché also exists within this project, being that there are three bedroom spaces located behind the four identical windows visible externally on the façade.

This project, however, is designed to emphasise the possibility inherent in changeability. For instance a wall slides so that within moments there might be only two bedrooms behind the four windows, or in the other direction the large bedroom might be bifurcated to enable the neat alignment of four rooms behind four windows. In this way, the relationship between the external manifestation of a building and an internal arrangement of spaces employs a form of poché that is mutable to circumstance.

This project seeks to generate an aesthetic of adaptation, one that exploits perceived ambiguity resulting from spaces that enable division and amalgamation.
_