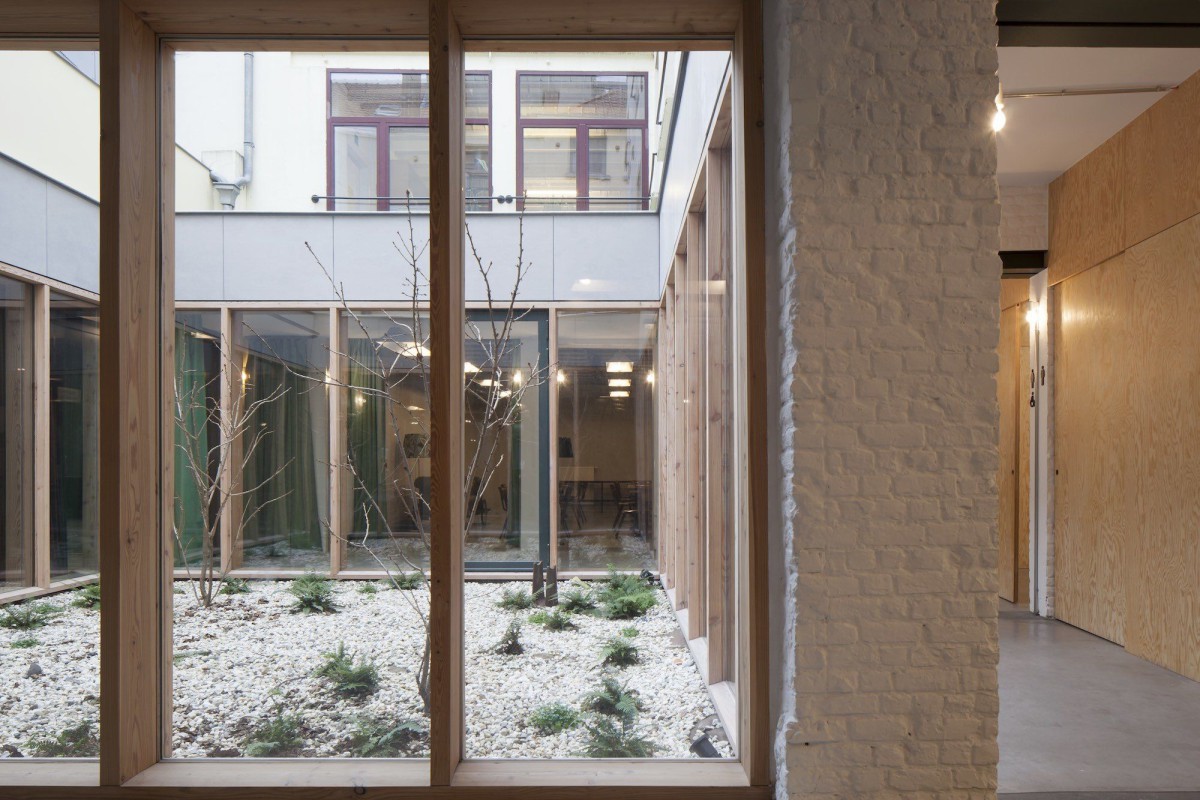 The building complex was once a coal depot organized around an inner yard, behind a series of houses and apartments in a quite banal street of a lively Brussels’ neighbourhood. Theatre Le Rideau launched a competition in order to transform and reorganize the whole site for their activities, in harmony with the neighbours living all around. The existing situation consists of five different buildings – the biggest one being the former coal depot – all organized around a courtyard. Each building was working independently from the others and one had to the cross the courtyard to reach another building, which of course was not comfortable neither for public, artists, staff or direct neighbours.

Our proposal consists in organizing functions and circulations throughout the five buildings, connecting them all together. By day, it functions as a luminous and comfortable tool for artists, staff and technicians to work on news pieces (Belle de Jour), by night, as an elegant and mysterious house of theatre for public to attend the shows and enjoy the experience of a theatre, somewhat hidden behind the front houses (Oiseau de Nuit).

The key piece of the project is a new patio, inserted in the existing inner yard. This new object, a precise geometrical figure made of four identic façades, offers a contrast with the heterogeneous existing buildings. The patio organizes all the programs around it (ticket office, bar, theatre hall, facilities…) and brings order and functionality to the project. At the same time, due to the enclosed condition and the geometry of the four glazed facades, it might also generate a mild disorientation and loss of connection to the outside world.

The patio brings light everywhere in the project, even in the theatre hall. In the bar, we have created a three-level light well above the counter, to bring some dramatized daylight in that once enclosed space.

Towards the street, we bring the theatre to the city with a billboard showing changing texts fragments, referring to the theatre’s plays. We try to play with the ambiguous expression of this theatre in the streetscape, without its own clear façade, but spread out on the street front. Where does the theatre starts and where does it end? Who knows…

In the former coal depot, the main intervention, besides the patio, was to transform the existing wooden roof structure in order to offer better visibility for theatre techniques, actors and public. Bringing the tie beam one meter higher allows for many more possibilities and gives a new and dynamic face to the refurbished space.
_