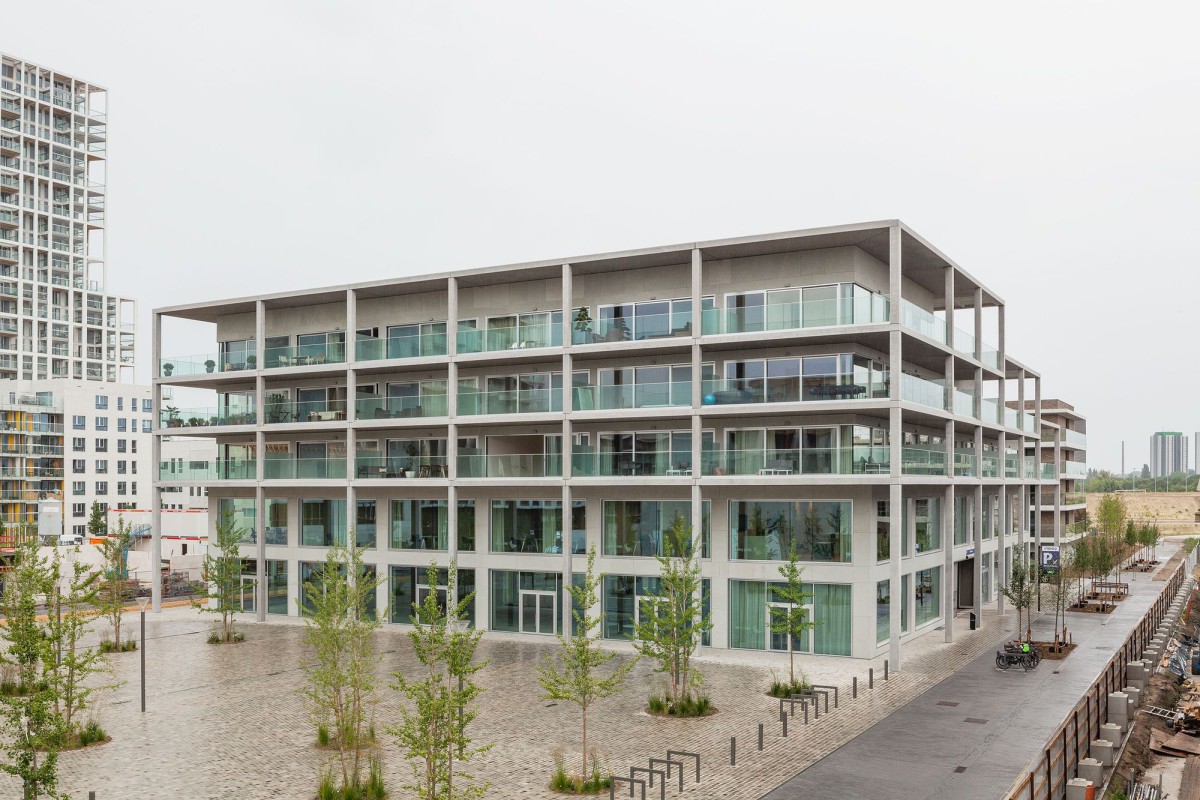 The City Palace project on the Panamarenko square represents, after 20 years of intensive work on the theme of the urban bloc, a new important step for Atelier Kempe Thill. The project is a hybrid programmatic stacking of great urban complexity. Moreover, due to its dimensions, it’s an urban module and architecture at the same time.
The apartments, located as stacked villas in the upper floors of the building, try to define a new residential model for the 21st century. In addition to a wide variation of typologies, flexibility and generosity of floor plans, the main aim is to give all apartments the feeling of an individual form of living with a great deal of connection with the outside world. How can actually a city apartment be designed in such a way that it gives the impression of living in a single-family house?

This is, after “Wintergarden Housing”, the second project resulting from the fruitful collaboration with Triple Living, the main project developer for the new Antwerp Nieuw Zuid urban expansion. Similar to Block 1, the project is the outcome of a collaboration with Polo Architects, who in turn designed the neighbouring building.
The urban planning basis here is also the design by Secchi Vigano from Milan and the priority is to offer to all apartments an outdoor space as generous as possible.

CONCEIVING THE CITY
Antwerp New South has a high residential density and the ambition to become a new urban area. With which character ultimately? Will it be experienced as truly urban or rather as a highly dense suburban area?
With the City Palace, Atelier Kempe Thill has not only the opportunity to contribute to this orientation, but also to design one of the most important buildings on the central square of the whole area: the Panamarenko square.
Atelier Kempe Thill sees the development of the new area primarily as a challenge to contemporary urban architecture, in the sense of a multifunctional, urban, all-round architecture that contributes as much as possible to the public space. The project is therefore designed with an active ground floor and a surrounding two-storey arcade of slender columns. These unite the ground floor and the first floor, which, combined with generous windows, form a kind of urban base. Together with the terraces of the upper floors, this theme is consistently developed around the entire building, which thus functions without any rear side.
Looking north towards the square, the façade is at its highest with a total of five storeys and a square front which gives its identity to the Panamarenko square. Towards the south the building is stepped down twice in order to adjust to the size of the neighbouring buildings.
The opposite side of the Panamarenko square is designed by well-known architects such as Johannes Norlander, Vincent van Duysen and Office Kersten Geers David van Severen.

HYBRID LAYERING
In its programming, the project is designed as a consequent hybrid layering. The ground floor contains rooms for various commercial uses, mainly restaurants and shops, in order to make the building as public as possible. The client’s offices are located on the first floor, which is accessible via a generous entrance on the ground floor. These form a closed ring around the inner courtyard with sight-lines through the entire building.
Above the offices there are three residential floors which are slightly decoupled from the courtyard and thus form their own world by the open gallery access.
A three-storey public underground car park for more than 300 cars opens up below the ground floor, serving larger parts of the area. This is accessed via a driveway on the long side of the building, which in turn is connected to the courtyard by a large window, allowing views across the courtyard and access to the apartments.
In addition to the car parking spaces, there are also storage rooms and building services units in the basement.
The aim was to give the building on each floor generous heights that exceed the minimum standards. The net height on the ground floor is 3.50m, on the first floor 3.20m. The living floors have a net height of 2.7m. The balconies on the upper floors have a net height of 4.1m.

COURTYARD HOUSE OR URBAN VILLA
Another special feature of the project is its size and the resulting possibilities and limitations. With its ambivalent dimensions of 45 m x 45 m, the question was from the outset whether it would make more sense to design the building as a full volume or to provide it with a courtyard. On top of that, the question arises whether the apartments can best be accessed without crossing the ground floor zone – mainly intended for shops and restaurants – without using too many vertical access cores.
The result, an intimate courtyard and four access cores, each in its inner corners, is the optimal outcome of an intensive process. Especially the access concept proved to be efficient and so robust that it did not have to be adjusted in the slightest during a total of three complete reprogramming and restructuring of the two base floors during the design stage.
An important component of the development concept is the fact that the apartments on the upper floors are partially accessible via the short open galleries in the courtyard. In the case of the apartments in the middle of the courtyard, this means that it has to be accessed by passing by one neighbour apartment. However, due to the generous width of 2.5 m, the reduced length and the atmospheric intimacy of the open gallery, this turns out to be a spatial experience instead of a necessary evil.

LIVING AS PLEASURE
The City Palace project extends the ideas for living in the 21st century developed in earlier projects, by creating a further variant of suburban living in a high density building as a new urban model beyond the ‘Existenminimum’.
The exterior spaces of the apartments are the central spatial theme of the project. A 2.5 m deep balcony has been designed on all four exterior facades as a spatial extension of the apartments. This balcony flows into the south-facing terraced flats and into spacious roof terraces, some of which are considerably larger than the total living space of the corresponding apartment. In addition to the real spatial and visual extension of the apartment, these terraces create the impression that the apartment is like a single-family-home right on the ground. In case of the uppermost corner flats, one can walk around the flat on three sides.
The spacious private terraces are combined with a large shared roof terrace for all residents.

ARCADES, LOGGIAS AND ROOF TERRACES
In addition to what they directly mean for the living experience, the terraces follow an overall architectural strategy. They form the creative backbone of the entire building. As a structuring and corrective architectural element, they create a uniformity of constructive axes on the outer façade despite the strongly varying constructive axis dimensions of the actual apartments behind them. Consequently, all apartments situated in the middle of the façade have the same balcony length despite their different widths. This correction also allows the three-part lift and slide windows of the intermediate flats to be pushed over the closed part of the façade, thus opening up the living rooms completely.
The balconies are wider in the corners than in the middle sections, giving the building an even more generous appearance.
They also vary in height. On the top floor, due to the stepping to the south, the balconies create a parapet for the terrace above as well as a planting area for green roofs. This creates a variation in size that not only lends more elegance to the living area, but also designs the terraces and balconies as individual rooms, creating a relaxed formal variation of the façade.
On the top floor, the parapets created by the elevation serve to integrate building services elements such as solar panels, which are thus hidden for the sight.
The ubiquitous balconies and terraces all around add a completely new dimension to the project: they give the building depth and a versatile, enriching legibility from the outside. The use of the balconies and the courtyard creates an unexpected space that is open and spacious, yet intimate and protective, inviting to linger.
The arcade in the lower area simultaneously creates a flowing transition between private and public. In the top floor a real roof landscape is created. The stone city is, as it were, transformed by suburban elements, also creating a new image for a new residential model.

URBAN COURTYARD – MOMENTS OF COMMUNITY IN THE NEOLIBERAL CITY
The courtyard has a length of 15.70 m and a width of 14.40 m. Due to its proportions, it is considered a vertical rather than a horizontal space. This verticality is balanced by the horizontal band façade of the offices and the rooms on the ground floor as well as the arcades.
Despite the small absolute width and length and the resulting intimacy, the generous pergolas make one experience the courtyard as relaxed and appropriate space. The vis à vis between the apartments works well, as do the distances between the offices and the rooms on the ground floor.
In order to give the courtyard an even brighter and friendlier expression, gravel made of white marble was used as the base material for its landscaping. Green bearskin grass is planted in this gravel. A multi-stem Persian Argan tree completes this contemplative design.
The symmetry of the building’s organisation, expressed in the courtyard by the sight line from the window to the underground car park entrance and the main entrance opposite, adds an additional calming and appropriate atmosphere.

MATERIALITY & ATMOSPHERE
With high-quality precast concrete elements and a consistently use of natural stone cladding, it has been possible to go, within the given budget, a big step further on the level of materialisation.
The open and intimate character of the living space created by the balconies, is further enhanced by the use of the materials. These are very physical: the discreet grey prefabricated concrete elements of the balcony construction are combined with Spanish limestone that was chosen to subtly match the grey of the concrete. The window frames are made of anodised and polished aluminium. The terraces are covered with wooden slats.
All materials are combined in a restrained and pleasant grey, which serves as an ideal background for the activities. It also fits naturally with the colour scales of Antwerp, where the proximity of the sea often reflects on the grey skies, enhancing the restrained nobility of the city. A suburban connotation can be read in the wood of the terraces.
In addition to the materials themselves, the dimensions and proportions of the elements are decisive in the materialisation. In order to give the architecture as much dignity as possible, the best attempt was made to achieve a new urban monumentality. Concrete elements and their axial dimensions are generous, the window elements are large in both the absolute and relative sense. The limestone is executed in large formats and special corner elements. In order to ensure a tectonic appearance that is as logical as possible, the stone frames of the windows are revealed by the window profiles and by custom made frames on the ground floor.
The plinth area of the inner courtyard is executed in grey cement plaster.
This adds a sensual level to the architecture of the living space, which rarely succeeds due to the circumstances in which the projects are created.
_