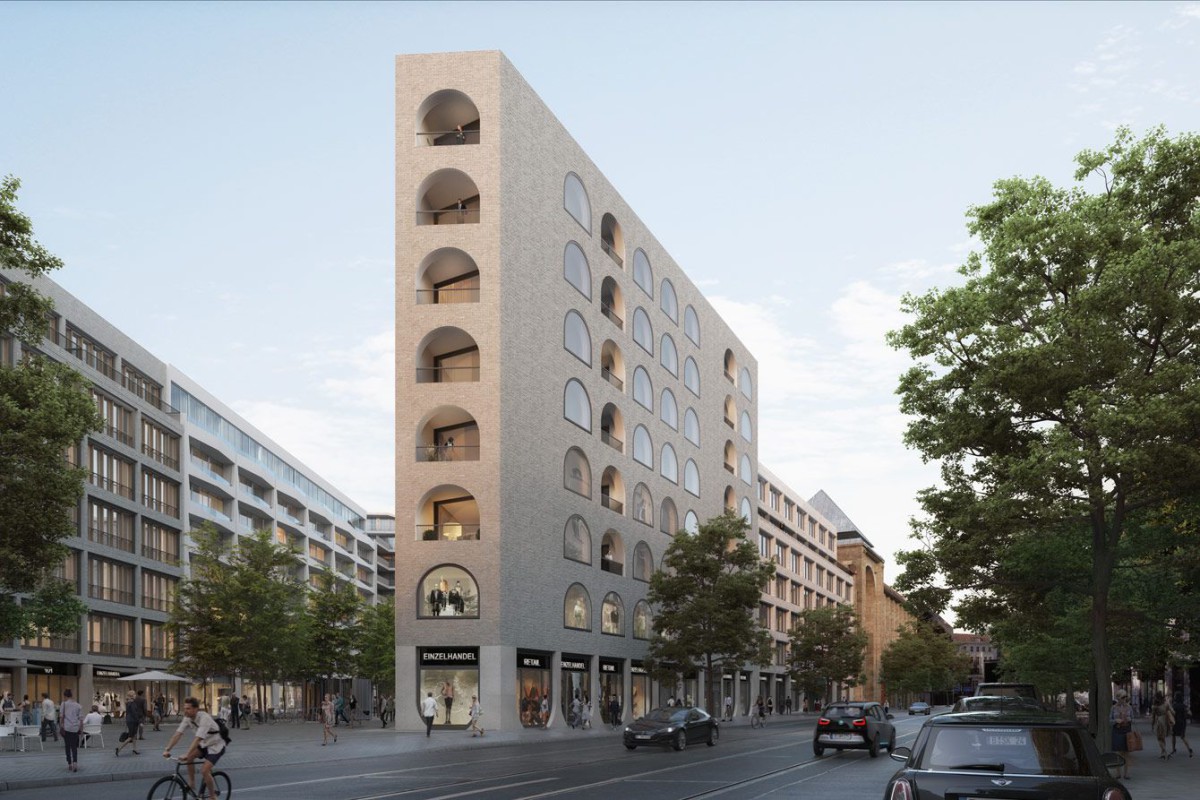 The cornerstone for the project “Am Tacheles” in Berlin was laid today. The area is one of the last gap sites in the city center and will accommodate a mix of different uses in the future: residential, offices, gastronomy and cultural use in the heritage-protected Tacheles building.

Herzog & de Meuron is responsible for the master plan of the site. A total of ten new residential and office buildings are to be built. Of these, Herzog & de Meuron is planning one office building and three residential buildings.In addition we’ll be responsible for planning the new building on the site of the former Friedrichstrassenpassage and for renovating the former Kunsthaus Tacheles.

According to current planning, construction will be completed in 2023.
_

In hardly any other city are the layers of local history – whether the legacy of development or destruction – as clearly and ubiquitously legible as in Berlin. The resulting built fabric, assembled and moulded by a variety of urban and architectural influences, is marked by the deeply ingrained scars of the Second World War, the post-war years and the divided city. Gap sites long dominated vast swathes of the Berlin cityscape. The wastelands held enormous potential, and the resulting creative scope and open-minded outlook were exploited in a diversity of ways. Berlin became both a field of experimentation for urban planners and architects, and a playground for culture and sub-culture.

The Am Tacheles site is one of the last big gap sites in Berlin’s Mitte district. At the time we were appointed to design the development scheme, half of the existing site was used as a car park and the rest abandoned to nature. A large derelict area sat at the centre of a trapezoidal urban block framed by Friedrichstrasse, Oranienburger Strasse, Johannisstrasse and Tucholskystrasse. Only the three extreme corners of the perimeter block were developed and occupied. The former Tacheles building was nothing but a sad ruin overlooking the empty ground. Until recently, a still-used mud path leading from the Tacheles gateway building across the site recalled the route of the erstwhile Friedrichstrassenpassage shopping arcade. The once buzzing, squatted Künstlerhaus Tacheles (Art House Tacheles), which in many ways epitomized post-fall-of-the-Wall Berlin, had lost its pulling power. The part of the old Friedrichstrassenpassage complex saved from demolition at the eleventh hour by the artist collective had deteriorated into a silent ruin with neither content nor context.

This then forms the starting point for our urban concept for the Am Tacheles, which incorporates the historic fabric in the re-creation of an enclosed block. The fragment will regain its full geometrical presence – even if only as a spatial element, as an internal passageway that restores the important link between Friedrichstrasse and Oranienburger Strasse. Indeed, this is no reconstruction or simulation, merely an interpretation of the historic footprint. The Tacheles building will be integrated in the development scheme and revitalized through the planned use as a culture venue. The aim is to recapture the site’s deep historical significance while continuing and developing the narrative.

The remaining part of the block is likewise modelled on the historic city layout. While seeking to respect the context, we are also looking for a new, unmistakable form for its expression. We start with a volume that completely fills the block and proceed to cut out a sequence of variously proportioned squares, yards and pathways to make it porous and permeable. The typical urban perimeter block thus takes on a new dimension: it assumes its own inner life, one capable of nurturing a vibrant mix of occupancies and users in the spaces within the perimeter development. The centrepiece is a large planted square opening onto Oranienburger Strasse that will lend the site a distinctive identity. The shops, restaurants and cafes lining the square will enliven the interior environment of the block. The adjacent facilities along Johannisstrasse comprise a planned housing development together with a series of variously designed yards. Here, particular care was taken to include a wide variety of basic typologies for the individual buildings as well as for the adjoining yards and squares. The spaces range from a small urban square, providing access to the site from the south, to a semi-private courtyard overlooked by the spacious balconies of the neighbouring apartments. The planned building typologies are equally diverse: they include a high-ceilinged loft building, compact town houses surmounted by city apartments, stacked maisonettes, a tower building at the very heart of the urban block and single-aspect studio apartments arranged along a fire wall.

The basic objective behind the Am Tacheles design concept is to create a piece of city that has due regard for human scale and emanates a certain intimacy. To create an urban structure that is robust and direct in both its constructional detailing and mix of materials. And to create an attractive, bustling urban space that serves the community and the individual alike.