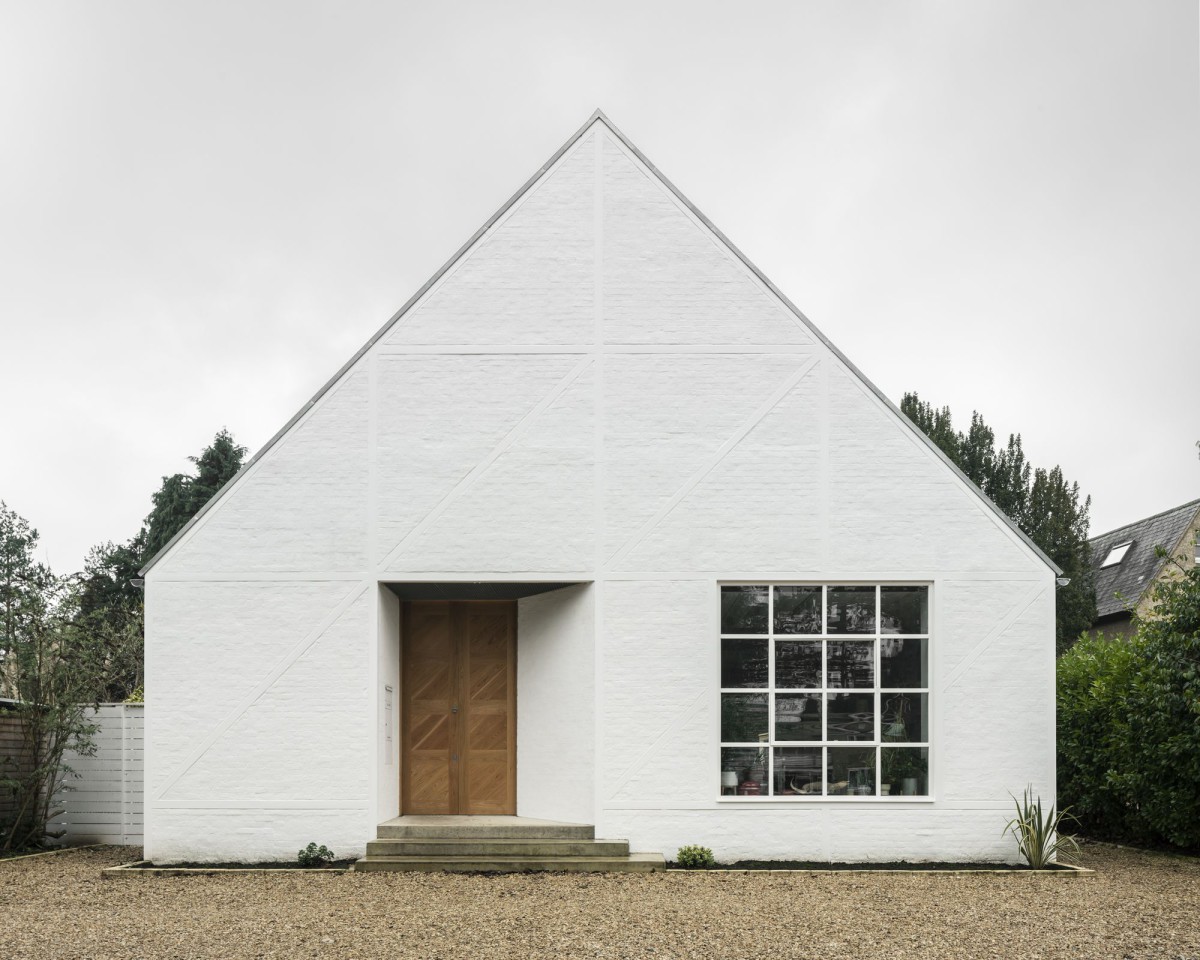 Ditton Hill House – a new 250sqm detached house – subtly references its suburban vernacular neighbours and creates a carefully curated relationship with its surroundings.
The project started with the idea of creating a building that at first glance appears almost traditional, but then, as you interrogate it further, is revealed to be thoroughly and unashamedly contemporary.

The exterior of the building borrows the mock-Tudor framed language prolific in the suburbs and expresses it as an exposed steel frame. The strength of this exoskeletal frame allowed for the members to be thinned down into an elegant grid, and enabled large column-free spaces internally. The rigid steel frame is contrasted with slurried brick infill panels, another nod to the local mock-Tudor style, adding texture and softness to the exterior.
The idea of melding the vernacular Tudor and industrial aesthetic was an important design driver for us. For instance, the fenestration references traditional leaded windows, blown up in scale to become large industrial style steel-framed windows. The whiteness of the exterior continues a long tradition of modern white villas and buildings in the area – not least the Art Deco style Surbiton train station, which became a constant point of reference throughout the 4-year design and delivery process.

Internally, the brief from the client was to make a house which incorporated an industrial simplicity and aesthetic, but was not simply a minimalist open-plan box. In response, we proposed a plan which has a variety of scales, from the small and more intimate spaces, like the study, to the grand scale of the living/dining room. The ground floor living spaces are deliberately cellular, but can also open up into a sequence of sociable, enfilade spaces.
The route through the house is designed to offer a range of spatial experiences. You enter directly into the vertically proportioned triple-height entrance hall. This voluminous hallway is seen as an intermediary space – a sort of internal courtyard – and so the materiality is deliberately less domestic, with exposed blockwork walls and roughly-screeded concrete floors.

From the light and height of the entrance hall, the path takes a step down under the stairs into a lower and darker hallway space beneath a heavyweight concrete soffit. Passing from the hallway into the living room, there is a dramatic change in spatial quality, from compression to expansiveness, as the ceiling height increases and panoramic rear windows provide an uninterrupted view of the garden.
Inside the living spaces, the material palette becomes warmer, with timber floors underfoot and softer plaster walls, both are counterpoints to the steel roof and floor decks that run throughout the house. The exposed decks add texture to the interior palette and were thought of as a modern take on exposed timber beams.
Upstairs, bedrooms and bathrooms are housed within the “loft-space”, which, at 5m high and primarily lit from above, has an almost church-like quality. The master bedroom gives onto a south-facing covered balcony – a space to enjoy the best and worst of the British weather.
_