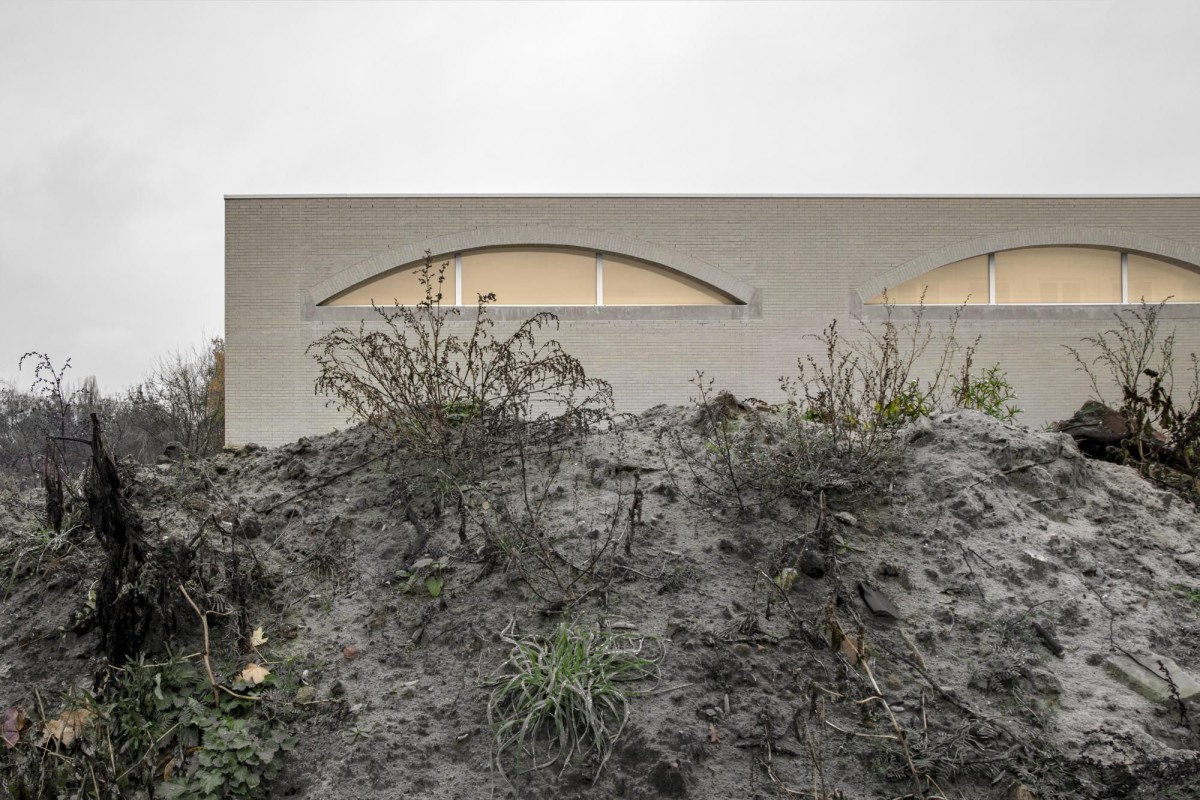 The sports hall complements the historic and protected ensemble of the Hans-und-Hilde-Coppi-Gymnasium while also creating new qualities through independent architecture. The key design element is defined by a visible three-part, barrel-shaped roof structure, whose special typological shape is reflected in the interior and exterior.

The new sports hall fits into the overarching structure of the Hans-und-Hilde-Coppi-Gymnasium and creates new qualities through its independent architecture, without neglecting heritage-preservation concerns. The intersection of the sports hall and the adjoining wing incorporates the principle of negative corners in the block structure, while creating a spacious, enclosed outside space for breaks.

By relocating the two volumes of the sports hall and the adjoining wing, it will be possible to connect to an appropriate degree to the existing building complex and to maintain the originally generous design of the courtyard area. The height offset creates a clear gap between the new construction and the existing structure, which also differs functionally from the rest of the building. The protected break area under the existing arcade is continued with an undercut. The structure of the sports hall picks up the alignment of the existing MUR, thus spatially encompassing the break area.

The clear division into two structures is continued in the distribution of functions. The lower part of the building provides all secondary functions, such as changing rooms, washrooms, and equipment rooms as well as the entire access structure. By moving the sports hall and adjoining wing, the existing building can be connected, and a central foyer of appropriate size can be created that connects the school playground and the street space. The changing rooms and washrooms adjoin the foyer, and their arrangement ensures orientation to the individual parts of the hall. Changing rooms and parts of the hall are connected via a central access hall. In addition to school use, the sports hall is also geared towards club and amateur sports. There is a limited construction area to meet the intensive need for use. Against this background, the double hall is designed in a special form with three hall parts.

The new building is designed as a reinforced concrete structure with flat ceilings and load-bearing walls. The structural correspondence defines a visible three-part, barrel-shaped roof structure, whose special typological shape is reflected in the interior and exterior. The roof skin is made of metal. Reinforced concrete beams serve as the main beams, which are tensioned in pairs and act as supports for the barrel shells. The partition curtain can be accommodated in the space between the pairs of supports. The entire roof structure in the interior is coloured red as a key design element.

The outer walls in the sports hall section are given a facing wall made from recycled bricks, colour-coordinated with the plaster facade of the existing building. Analogous to the ceiling structure, the window openings are spanned by flat brick segment arches, with the thrust of each adjoined to a tension band with abutments as a precast reinforced concrete element.

The facade of the lower part of the building evokes the plaster structure of the existing building in terms of material and colour. A generous horizontal line of windows underlines the openness to the street space. Changing rooms and washrooms are lit and ventilated via vertical and horizontal skylights. The main feature of the interior design of the sports hall is the colour contrast between warm wooden surfaces and the red roof structure.
_