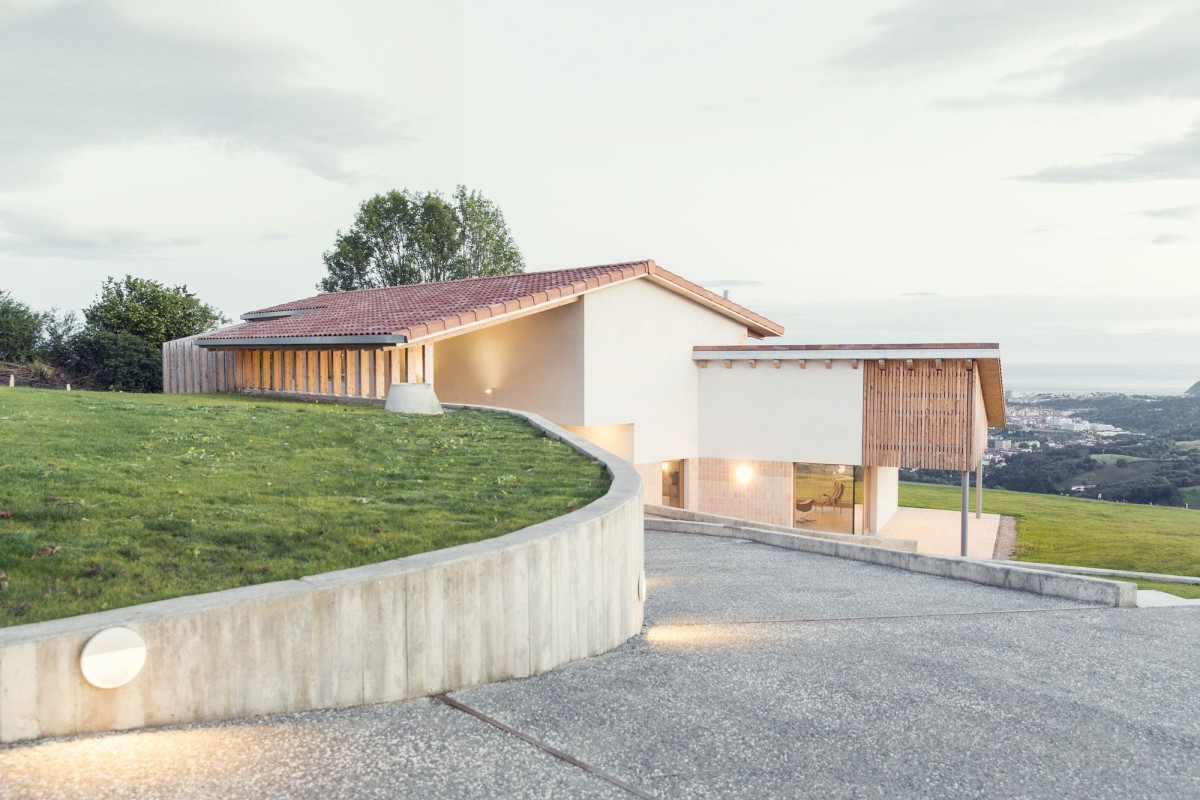 The commission proposes the construction of a single-family house in an independent plot, located in the natural surroundings of the Hermitage of Santiagomendi in Astigarraga (Gipuzkoa). It is a privileged settlement, from which the great coastal views of San Sebastian are dominated.

The project is born as a response to the place, articulating the access from the highest part of the hillside at the south, with the views of the Cantabrian Sea in the north. This way, the access to the house is a sequence which, in a gradual way, gets into the land, hiding the views, to show them later with a bigger impact in the interior.

The new building is adapted to the gradient in a stepped way, avoiding the controversial cuts of the hillside, and containing the height in some consecutive steps. Moreover, the use of inclined roofs with great eaves emphasises the adaptation to the surrounding while the house is protected from the northeast storms.

Volumetrically, the new house is composed of two rectangular pieces, different from each other in orientation and height. Therefore, the proposal searches for a correct position of the different rooms regarding their orientation and façade openings. The night zone (bedrooms and bathrooms) is gathered on two floors (the ground floor and first floor) inside the highest building, while the day zone -composed of the living room, the dining room and the kitchen- is organised in the same space inside the shortest piece. This building is rotated in relation to the main construction, achieving a better orientation for this big room. The point where these two volumes get together is the area with the biggest tension, concerning the structure as well as the function and the spatial character. The verticality of this space below the big skylight of the roof is opposed to the strong horizontality of the landscape views.

The rotundity of the two built volumes is in contrast with the organic placement of the urbanisation walls, which extend themselves through the plot helping in the integration of the building on the site. The different rooms of the house are equipped with exterior spaces that allow the extension of the diverse purposes towards the exterior. These are delimited areas that allow their use in a gathered way.

Regarding the materials used, natural plasters are used at the façade endings, alternated with areas covered with ceramic pieces, which help on the composition of the openings. Moreover, some other respectful materials are added, such as the ceramic tile of the roof, the wooden pergola and the enclosure of the porch. The urbanisation walls are made of texturized concrete, while the exterior pavements are divided in some areas covered with mudbrick and some continuous deactivated concrete floorings.
_