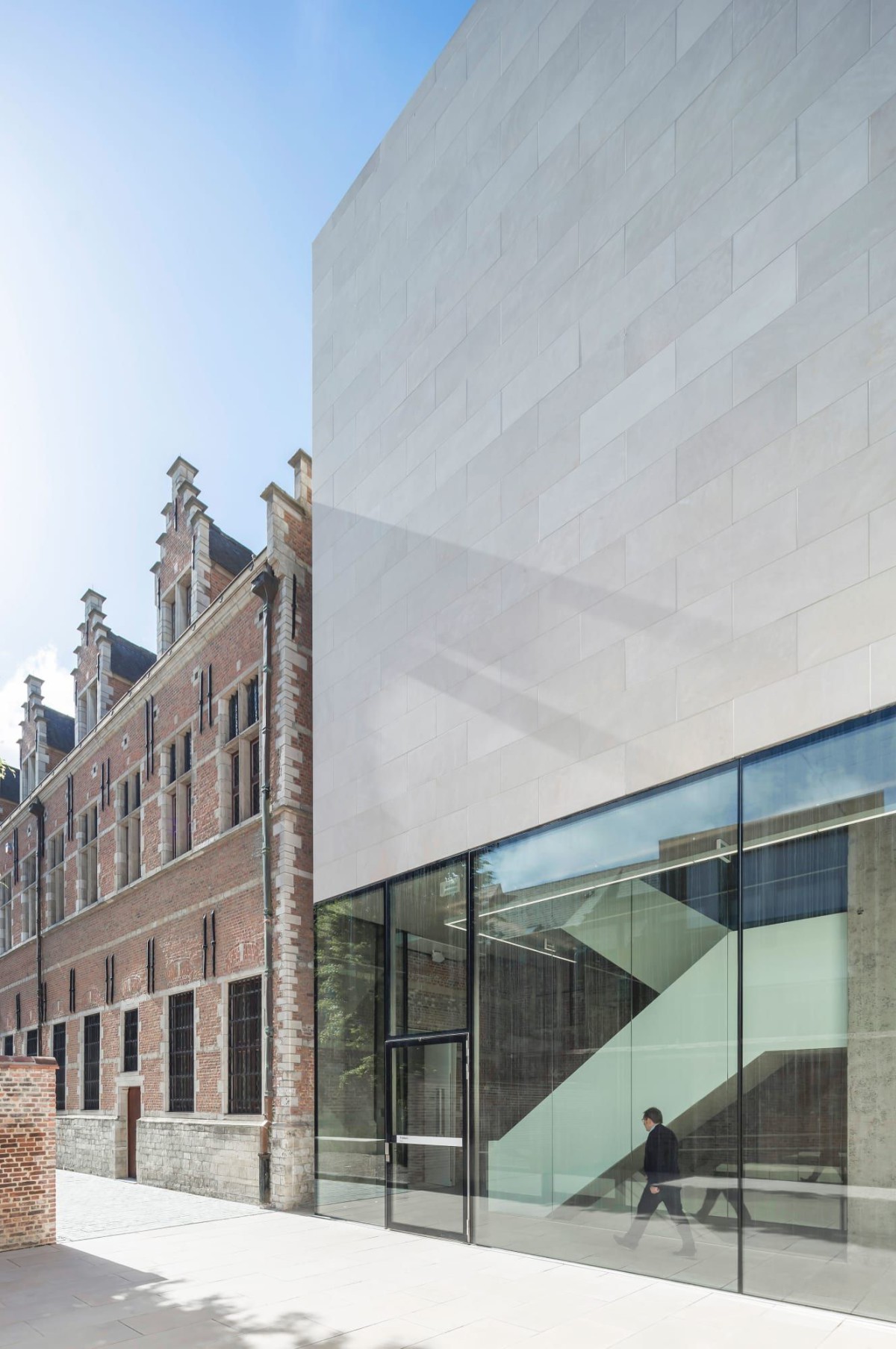 Hof van Busleyden exists of an extensive building complex in bricks and sandstone in copy late Gothic style, around three outdoor spaces: the northern double garden with high trees, the central rectangular garden with a paved courtyard and the south-facing city garden.
Since 1938 the building functions as a city museum and was protected as a monument. Hof van Busleyden is the northern endpoint of the museum axis in Mechelen, but also connects the museum axis with some of the tourist routes.

Phase 1 includes the restoration and redesign of the museum Hof van Busleyden and the extension with an underground museum hall. In phase I dmvA focused on the urban development. Hof van Busleyden is surrounded by a concentration of important buildings that are part of the cultural heritage of Mechelen. Originally, the three outdoor spaces were completely closed off for and to the public. dmvA decided to give the previously closed locked south garden back to the Mechelaar and thus influence the circulation positively on the site. By opening the covered walkway, the two front gardens are linked, and it is possible to walk easily through the whole site. The visuality of the southern garden responds implicitly the new underground spaces.

The new museum halls are located 9 meters below the outdoor area and the Carillon museum. An architect does not always have to intervene visibly, especially when he has to deal with a protected monument. dmvA therefore decided to place the hall below the forecourt to not damage the surrounding historical context. This fine example of underground construction provides a small and large exhibition hall for which a conditioning A certificate has been awarded, unique in Belgium. The largest exhibition hall (30 meters free span, 6,5 meters high) can therefore exhibit international masterpieces. In order to anchor this volume in the construction pit and to be able to install the concrete beams smoothly, both the garden and the eastern wing (the carillon museum) have been completely demolished and reconstructed with minimal functional adjustments.

The eastern wing (the carillon museum) contains the circulation to the underground exhibition halls. The building was stripped for the construction of the underground halls, but has been restored as originally. Inside, the circulation has been designed by dmvA in a contemporary way. Former Flemish Bouwmeester Bob Van Reeth, who has an affinity with Mechelen advised dmvA during the design phase that ‘the stairs should radiate such grandeur that a father considers this staircase worthy to hand over his daughter at the wedding ritual’. After completion of the stairs, this architect, famous for his unvarnished opinions, has complimented the intervention. The circulation responds to Mechelen as a traditional furniture city. Historical references, such as the existing woodwork, meet a contemporary material game of clean lines and glass elevator shaft, white plaster, underlying steel skeleton and oak-covered surfaces and window frames. By descending, the prominent elevator and stairs become more discreet, so that the focus is on the underground hall.

As a continuation of the concept to elevate Hof van Busleyden as a museum object in a subtle way, the pavilion with a second staircase and elevator, is strategically positioned in the southwestern corner of the forecourt. The contemporary form attracts the passer-by to the courtyard but is modest enough to deflect the circulation to the gallery with the entrance to the museum. The building is made of white limestone, referencing to the reveals in the existing historic buildings.

Phase II involves the renovation and transformation of the main buildings to a museum with bar, bookshop, terraces and a new circulation building in sand-lime brick as a replacement of the 19th century caretakers lodge. The caretakers lodge prevented good accessibility on the site and was therefore demolished. Instead, a new circulation building was installed that connects all floor levels and in which a technical room is housed. The building is a serene abstract building, executed in white natural stone, the same material as the reveals in the adjacent building. Due to its abstractness the circulation building doesn’t intervene with its surroundings and takes, figuratively ànd literally, a respectful distance from the surrounding historic buildings in a respectful way.

The interior walls are made of concrete, combined with a glass wall on the side of the adjacent historic building. The concrete gives a rough and honest impression, which matches the existing buildings and their scars. De detailed glass windows emphasize the restrained architecture and provide synergy with the surroundings. Because the block is cantilevered, there were no columns needed to support the building. Through the glass wall there is always a maximal experience of the adjacent historical building, without a column blocking the view.
The vision of dmvA clearly reflects in the use of materials: Outside, an abstract, restrained mood is created, with respect for the adjacent buildings. Inside, the atmosphere is rough and lively, connected with the walls of the historic buildings. The adjoining sculpture garden is also divided in two: One part matches visually to the new circulation building and the other part will be a green place that embraces the historic building.

The new building is completely closed off, but natural light enters through the roof. The roof consists of a grid of concrete beams with glass on top, creating an open atmosphere. The daylight is very inviting, pulling you upwards.

dmvA had the goal of making Hof Van Busleyden time transcending with his additions and adjustments. The museum will be able to accommodate many exhibitions in the future, which means that the architecture must be transcending generations.
_