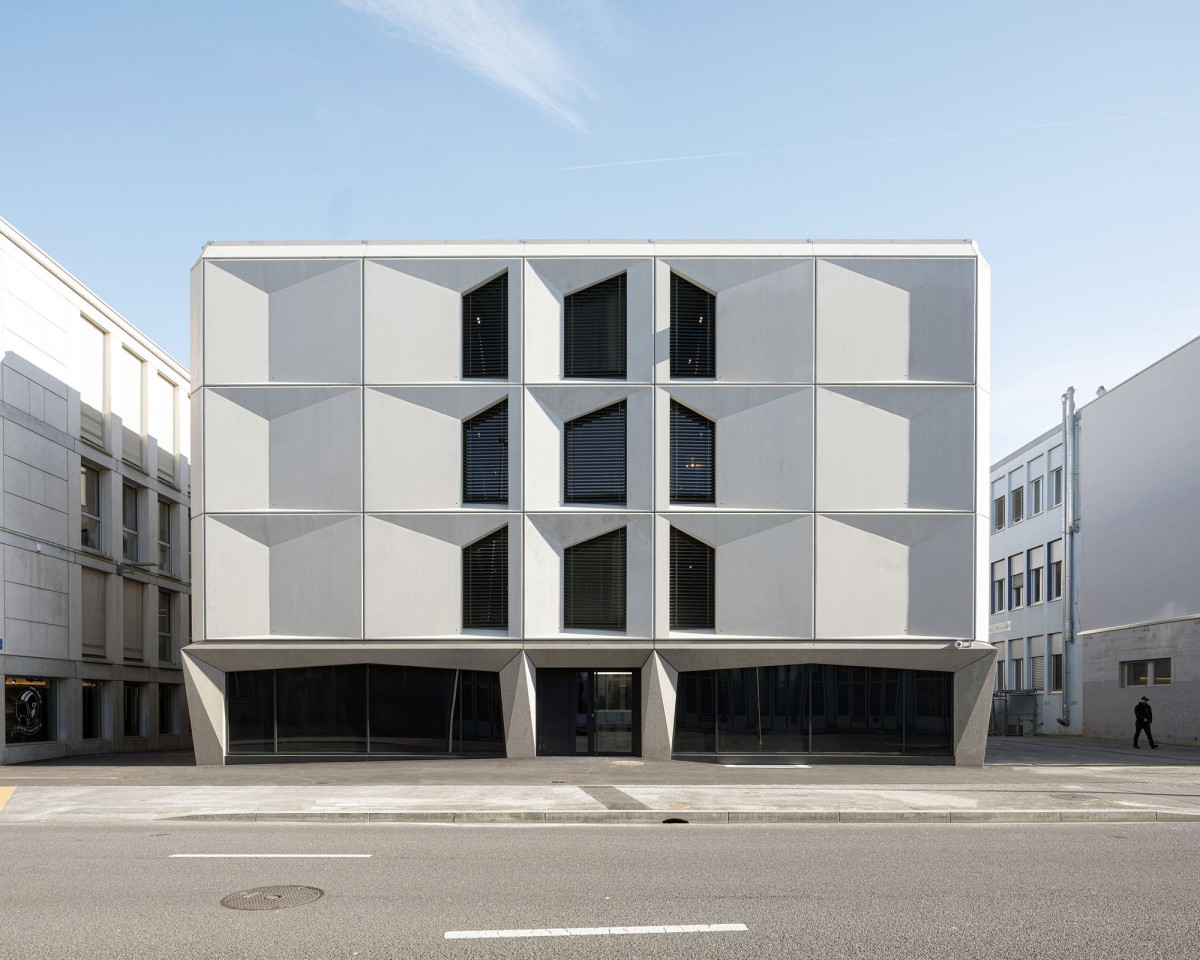 Located at the western edge of Lausanne’s central Le Flon district, this hotel building presents a monolithic mi- neral block that blends with the site’s industrial heritage. Utilising the template provided by the district’s street plan to optimum effect, the design echoes the dense urban grid patterns characteristic of Le Flon’s traditional warehouses and completes the square from which it is accessed. The four façades are uniform in appearance, their repeat motifs created by prefabricated concrete units. The design reflects the individual room modules, creating a continuous pattern of facets and folds across the building’s four sides. At ground level, geometric pillars tapering towards the base balance this massive carapace on more delicate points.

The arcade complements the arcades of neighbouring buildings, extending the gallery toward the future deve- lopment heading in the direction of Voie du Chariot to the south. The building entrance – which also serves as a lobby and restaurant – combines a pre-existing basement structure with the upper floors to create a generous,
high-ceilinged and fully glazed communal space that is open to the public. The central glazed atrium, a typical hotel feature, underscores the building’s core function. Visible service ducts on the ceiling and exposed concrete walls, inspired by the site’s industrial heritage, give these public spaces their distinctive atmosphere, developed in conjunction with the project’s interior designers.

Above this ground level on its concrete pillars, the conti- nuity of the building envelope makes the layout of in- dividual floors instantly comprehensible: the rooms are arranged in an outer ring around a central services strip. They are accessed along two corridors with natural ligh- ting at each end, running either side of this extended cen- tral hub. The central glazed atrium also provides natural light on each floor and helps building users navigate the very regular floorplan on each level.

Repeated units are the essence of how this building works, both in its floorplan and in its façades. The in- dividual room is the unit forming the basis of the hotel design. The prefabricated concrete modules are designed around the individual window, which is placed so that part of the room’s outer wall remains solid, preserving a sense of privacy at the top end of the bed; the window
is set at a slight angle, increasing the interior space avai- lable while also offering an indirect view of the outside world. On the façade side, the glazing creates a fold-like indentation in the outer wall surface. The non-rectangular outline of the window, along with the angles of the lintels and facing walls complete the motif, which is repeated uniformly across the structure – with the effect that neither horizontal nor vertical lines predominate in the building envelope design.

With its monolithic form, aligned with the rectangular urban grid pattern of Le Flon’s warehouses, its repeat mo- tifs and its mineral building envelope, this building blends naturally into Lausanne’s city-centre, while the window design and the geometric patterning of the façades give the hotel its own distinctive identity.
_