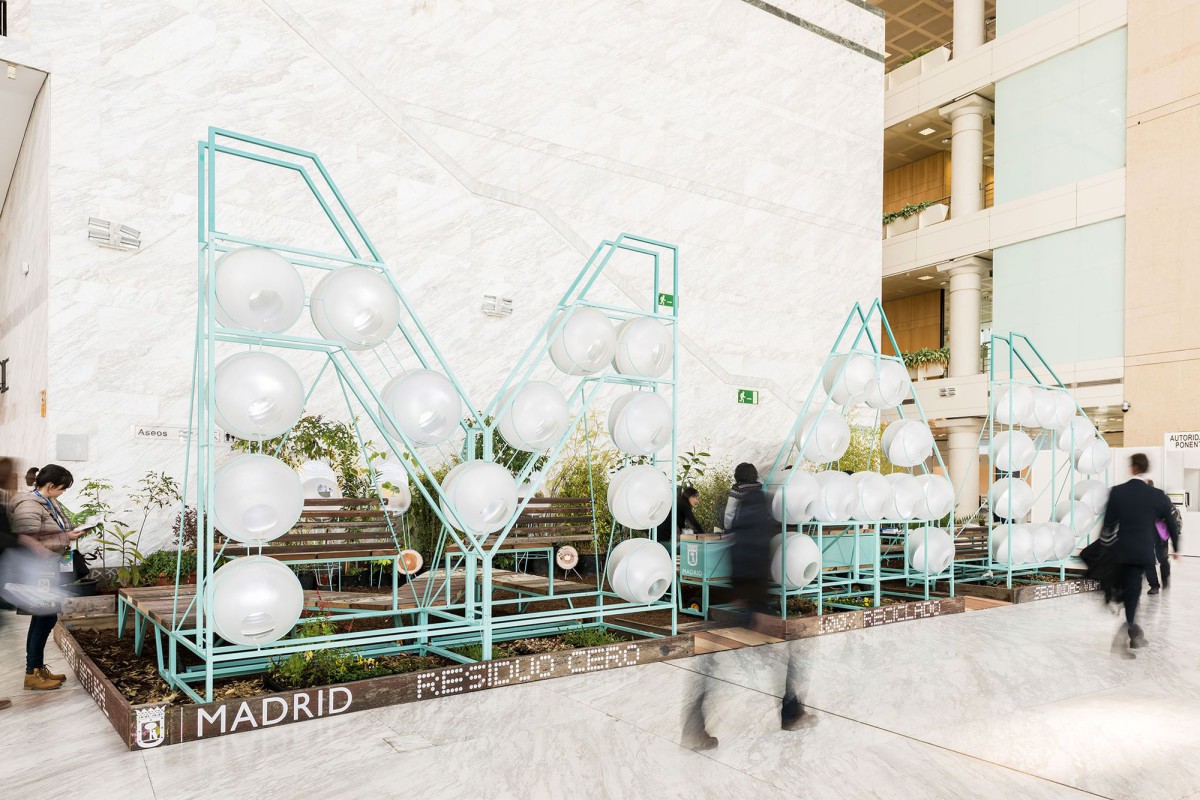 Identical, reusable and sustainable furniture made from obsolete materials from the municipal warehouses of the Madrid City Council.

How can we imagine the future of public spaces in our cities, at a time when warnings and risks of climate change, the #fridaysforfuture generation’s claims, or the new logics of social distancing converge, in a year in which “How will we live together?” is the motto of the Venice Biennale?

F.U.A. is a prototype of public equipment designed as ecology that brings together the social, the energetic and the environmental, and like all prototypes, it has a history:

MAD PAZ
In November 2016, the third stand of the Madrid City Council was inaugurated at CONAMA (National Congress of the Environment). For the third consecutive year, the material is a pedagogical experience: a stand that through its operation and materiality shows Madrid’s environmental policies, based on reuse, naturalization, sustainability, second lives, social cohesion, encounter, open source and participation. 3 letters-furniture starred in said stand: M A D

In April 2017, in the Peace Forum (World Forum on Urban Violence and Peace Education), which took place in Madrid, three letters P A Z were added to M A D in the main meeting space of the Forum. A second life.

Since April 2017, M A D and P A Z have been in the north courtyard of the Conde Duque Cultural Center … public furniture in which adolescents study, families snack, children play, retirees rest, in relation to the nearby Municipal Library. A third life.

IMAGINA
In the summer of 2017, the Imagina Madrid program incorporates seven letters as an identity element: I M A G I N A, which travel by truck to each of the 9 sites in the Imagina program, aimed at reactivating sites and public spaces in different Madrid districts.

Since 2018 I M A G I N A is part of the equipment of Matadero Madrid. Another second life.

URBAN PROTOTYPES
This whole set of sustainable urban furniture is built from the logic of reuse, encounter and mobility. A design of metal frames on wheels allows the installation of a lighting and signage system made up of luminaires recovered from municipal lighting warehouses (globes of sodium lamps that are gradually being removed and turning into waste) with new LED elements powered by solar panels. In addition, this urban furniture includes seating spaces, built from wooden planks recovered from deteriorated Madrid benches, which had previously been stockpiled in municipal public furniture warehouses.

All this experience is a sample of how other sensible and creative logics allow the construction of objects and spaces based on a sustainable and social design.
_