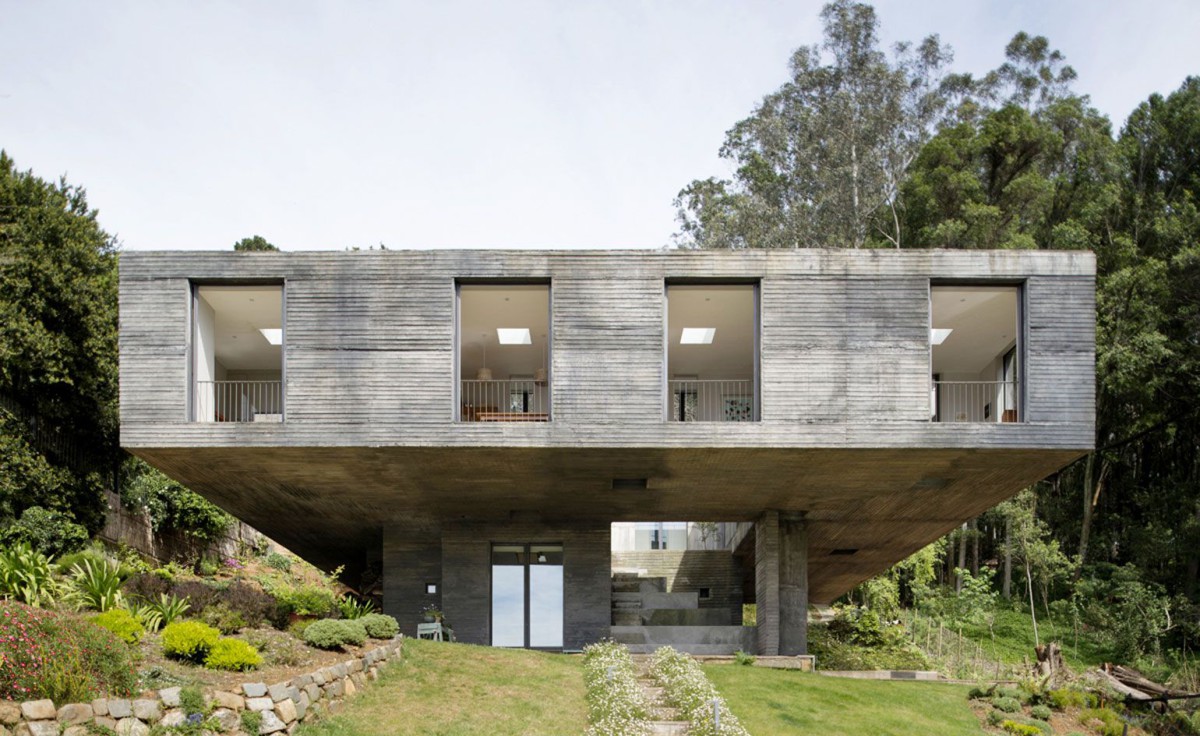 Hemmed in between a steeply sloping hillside and a wood of eucalyptus trees, the narrow plot of land compels one to cross the garden to arrive, descending, at the small bay of a lagoon. Overlooking the landscape, a monolithic prism of concrete attempts to articulate the contradictions of the topography with a square top floor measuring 20m on each side balanced on top of a compact bottom floor measuring 8.5m on each side.
The upper floor contains a central patio with the same size as the bottom floor, therefore all the suspended rooms are exposed to the outside by the four sides of their section. This upper floor, a dogmatic piano nobile that compensates for the inconvenience of the diagonally set natural terrain slope, is based on a grid of four modules per side. The middle rooms on each side face the central patio, while those at the corners are articulated by circulations that occupy a subsidiary module.
Overhead apertures in the centre of each enclosed space and at the ends of the circulation paths reinforce the vertical dimension of the layout, and also amplify the shimmering of the pond water. Less formal, the bottom floor house the more day-to-day functions of the domestic realm; its square plan divided into four equal quadrants is cut back in the north corner, a subtraction that serves as a visual and functional short cut between the upper patio and the edge of the lagoon.
As in Matila Ghyka’s description of a landscape as a ‘crystallization of a conflict of forces’, the entire structure is a stony mass in apparent repose. The four walls of the patio act as Vierendeel girders resting in balance on the podium. Almost as if they were diffusing the stress, the concrete surfaces have the coarse texture of fine formwork boards with a diluted black patina.
_