School of Science and Sports . Brighton 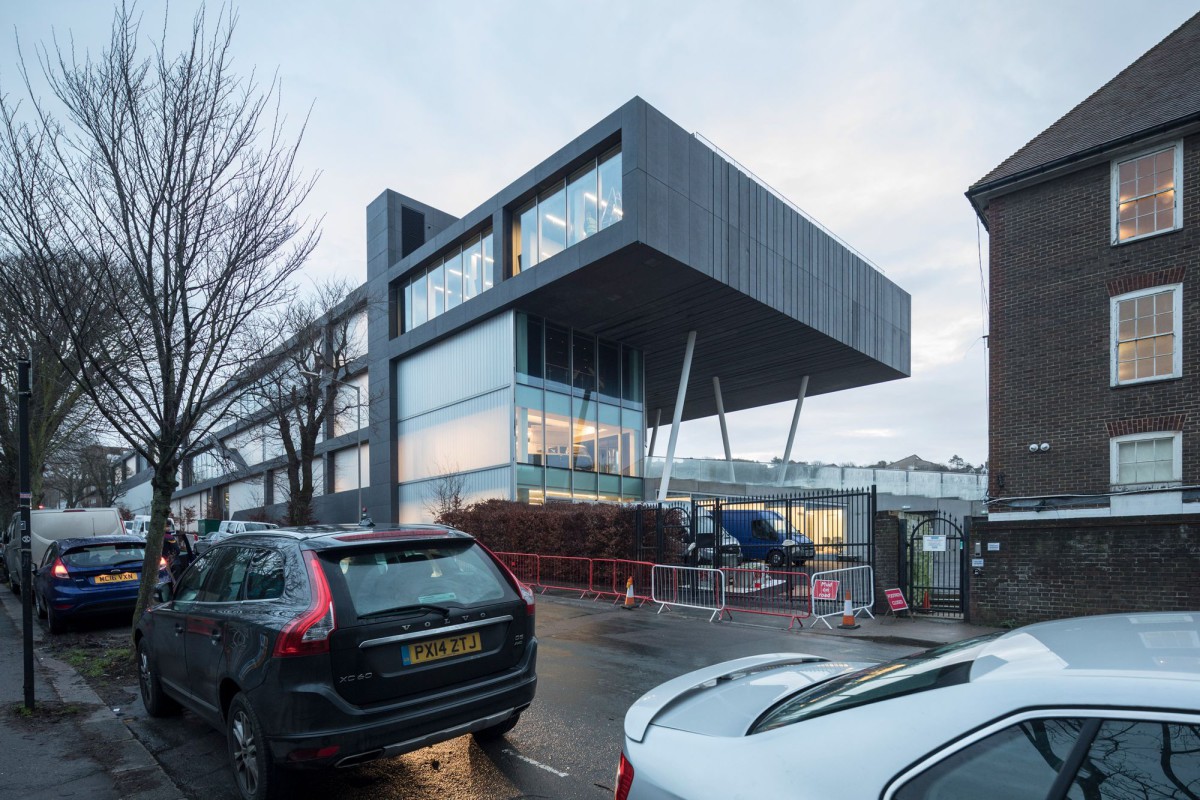 The School of Science and Sports at Brighton College defies the conventional character of educational buildings – one of endless empty hallways and imposed silence – and instead combines the two departments to create a vibrant building with lively spaces where activities are not necessarily dictated by a school timetable. Observing that processes of learning take place outside as much as inside of the classroom, the design articulates a new idea of educational space bolstering interaction and exchange.

Why isolate the department of Science from the department of Sports? Instead, the two are merged into one linear volume, situated at the edge of the playing field. Primary sporting spaces are on level with the field, and the sports hall opens directly onto it. The Science department, which include classrooms, laboratories and a green house, spans over the sporting spaces like a skeletal bridge. The façades are inspired in part by the regular rhythm of the terraced housing opposite the new building. The rooftop provides a sweeping view of the North Sea.

Stimulating social communications between the students was central in the concept: generous and open break-out space outside of the classrooms create room for informal interaction and private studying. Level shifts, grand staircases and glass visually connect the activities taking place in both departments and trigger unexpected exchanges between different disciplines. Individual components of the building are exposed to each other: an indoor running track on the ground floor is visible from upper levels, classrooms have floor to ceiling windows, even fume hoods in the chemistry classrooms are made transparent – enabling people walking down the hallway to witness ongoing experiments.

OMA was awarded the project after a competition organized in 2013, when Brighton College needed to expand the Science School in terms of number of labs, and wanted a state-of-the-art sporting facility to foster talent and physical wellbeing. In the original competition brief the Sports Center and Science Department were presented as two separate projects. After a revised brief in 2013, and a second competition phase in 2014, planning approval was acquired in 2015 and construction started in 2017. The project was realized with a total construction budget of £36,700,000.

Established in 1845, Brighton College is a private, co-ed boarding and day school in Brighton, England, and over the years has cemented its reputation as one of Britain’s leading schools. The campus is comprised of two areas: a historical quadrangle, composed of Grade II listed buildings designed by Sir Gilbert Scott and Sir Thomas Jackson in the 19th century; and the playing field lined with buildings from the 1970s and 1980s, the site of the new building.
_