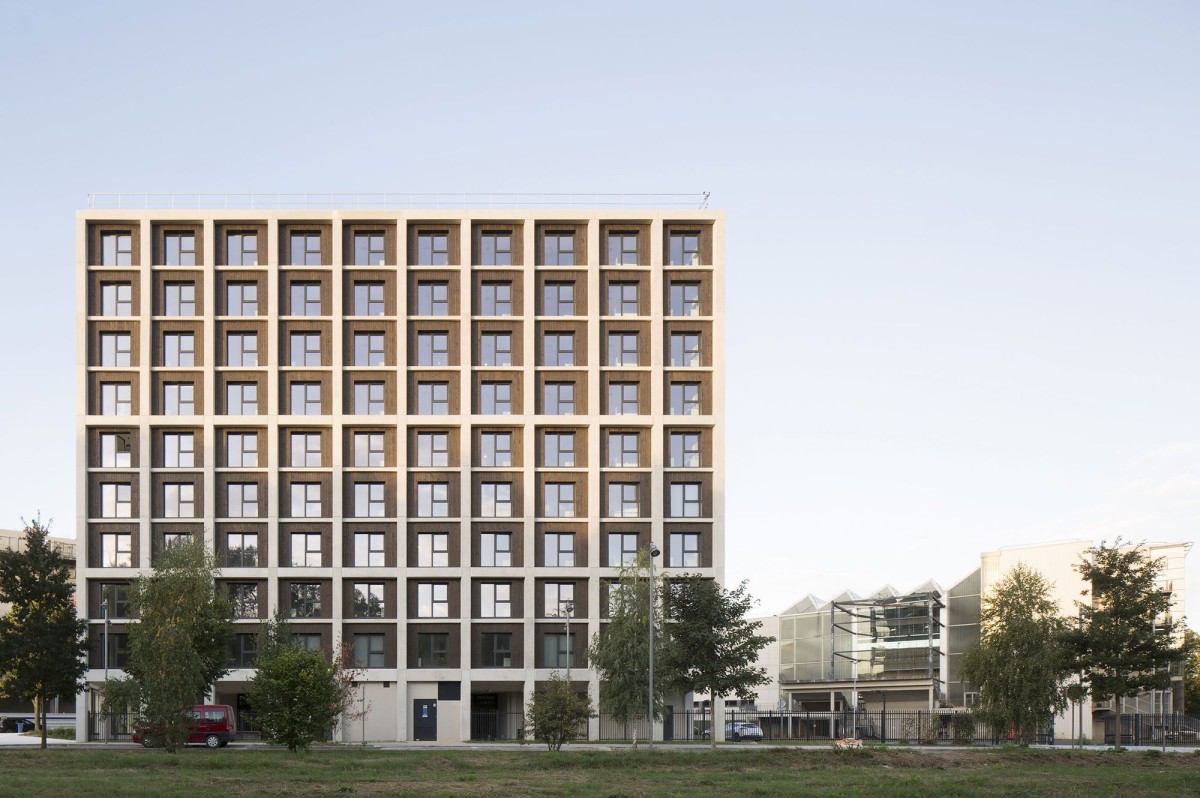 In a singular approach of the relations between the domestic, the collective and the city, the student housing designed by AVA develops a vast atrium. Centerpiece of the operation, the atrium is designed as a place of freedom, passage, gatherings, hustle and bustle. It acts as a public square.

The sun rises on the East !
In Marne-la-Vallée, one of the five new towns imagined around Paris by the master plan of 1965, Cité Descartes is an international cluster for research and development. The campus brings together more than 50 research laboratories and 18 grandes écoles. 20000 students are enrolled in the various excellence schools housed in exceptional buildings: the ESIEE designed by Dominique Perrault in 1987, the French Institute of Urbanism designed by Pierre Riboulet delivered in 1991, the The École des Ponts ParisTech designed by the Chaix Morel in 1997, the School of Architecture of the City and Territories (EAVT) designed by Bernard Tschumi Architects in 1999, the Gymnasium of the Haute Maison designed by Atelier JPB in 2007 and the Georges Perec university library deisgned by Beckmann N’Thépé in 2016.

A new start for the campus
The new student residence designed by the AVA — Atelier Villemard et Associés is part of this History. Located at the current limit of the University cluster, the residence kicks off the future development of the site and initiates a new urbanity for the campus. With its localization and its exceptional interiority, the building represents a new landmark. Its strong form responds to the volume of the neighboring School of Architecture by affirming a radically simple yet imposing volume.

Born at the beginning of the 20th century, student housing is an experimental program for architects. Few programs require such an articulation between the scales (from the optimized individual living unit to the common and open space facing the city) and are subject to such budgetary constraints (necessary to make them affordable) and a rigorous management framework. According to the times, the trends and the evolution of the urban contexts, the architects have multiplied the inventive figures.

From the constructive modernity of the Swiss Pavilion of Le Corbusier opened in 1930 to the essentialism of the Paris Residence for Researchers designed by Bruther in 2018, the funicular of Eric Lapierre’s student housing Chris Marker also inaugurated in 2018 in Paris or Copenhagen’s Tietgenkollegiet ring Dorm by Lundgaard & Tranberg, student housing focus their efforts on typological reaserch.

The domestic, the collective and the city
In a singular approach of the relations between the domestic, the collective and the city, theproject designed by AVA develops a vast atrium, unique for a student housing program. Centerpiece of the operation, the atrium is designed as a place of freedom, passage, gatherings, hustle and bustle. It acts as a public square. The monumental central atrium characterizes the desire to create an exceptional collective place. Between the large outdoor public space and the individual housing unit, this Agora organizes the meeting of scales and seeks to make «community». The atruim also has many environmental virtues. It allows a natural ventilation through roof openings and large glazed doors on the ground floor. Thanks to its inertia, it refreshes the atmosphere in summer.

The concrete structure of the building and the external wood-frame walls combine construction techniques including prefabrication. Posts, balconies, timber framed walls and bathrooms were prefabricated and each floor was built in just 10 days.

The sun sets in the west ! Following the cardinal points each room opens towards the horizon and the geography of the valley of the Marne. Generous private and individual balconies extend the façades. The units are served by the open corridors circling the Atrium. The ground floor is entirely dedicated to collective uses, by gathering a large open-space, a cafeteria, a gym, a study room, a laundry and a large bike parking space.
_