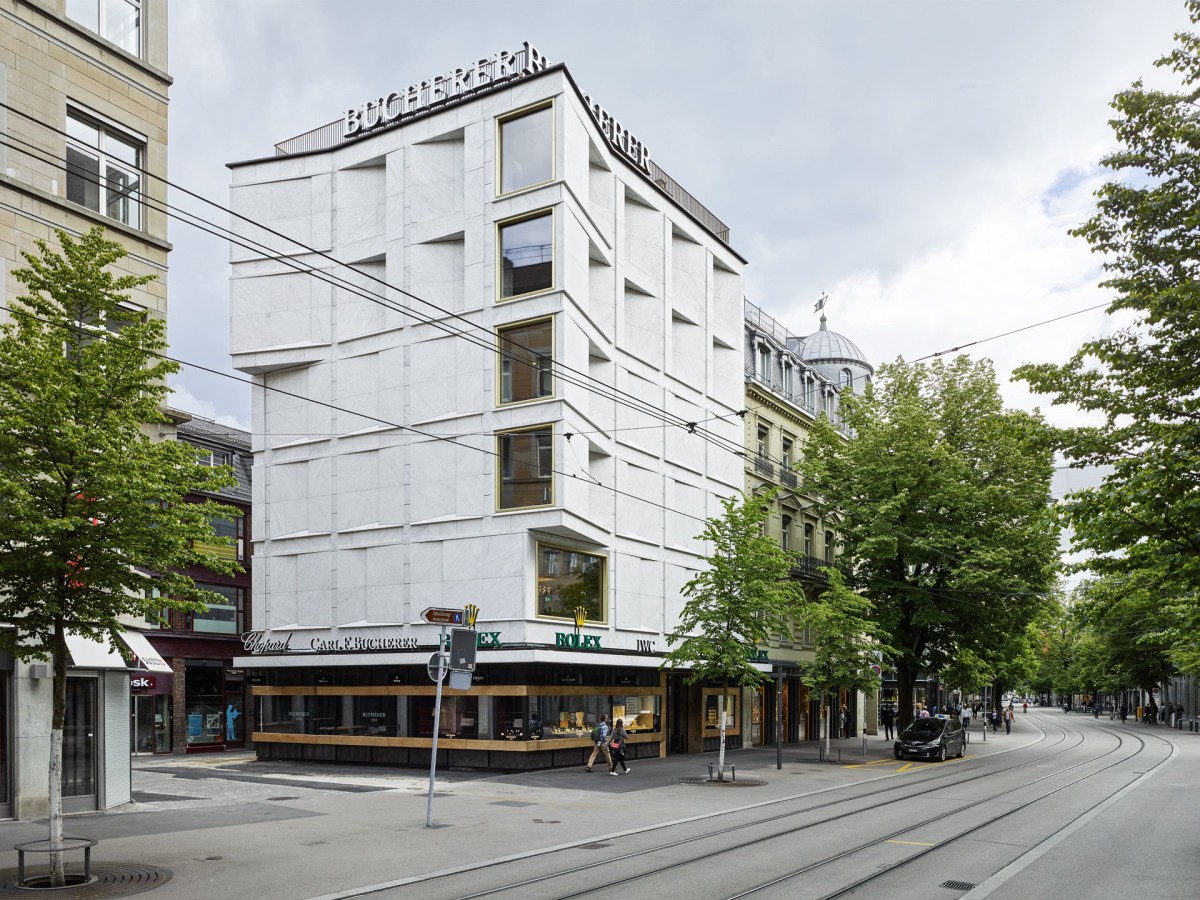 The Bucherer store is among one of the “Individuals” on the eastern-side of Bahnhofstrasse. Its peculiarity in bright natural stone is important continuation to the character of the area. Securing the existing – a conversion – raises the question of permanence and generally about timelessness, innovation and perfection – core principles of Bucherer. We carry the marble into the future, as well as the flat relief of the façade, the volume, the supporting structure and its order – a flagship store designed for Bahnhofstrasse.

Presently, the most important form of luxury lies in time – for which the clock symbolises. Time goes hand in hand with concentration, achievement and satisfaction in perfection. Materiality stands for those qualities when we convert this from watchmaking to architecture: in its expression, craft and tectonics. Materiality can transport luxury and give shape to corporate culture. The marble from the Maggia valley is precisely crafted and redefined into jewellery-like elements. The plinths nobility through the use of the ancient metal bronze appears not only in the precise and crafted work of the St.Gallen caster and founder but also its delicate surface in response to the white-crystalline stone.

The narrowness of the urban context makes daylight even more meaningful. The façade becomes, like a sundial, an image of the daytime and the seasons. The marble relief is – In Praise of Shadows – sometimes flat and soft, then sharp and ordered – le jeu savant, correct et magnifique des surfaces assemblées sous la lumière (after LC).
_

Bucherer
Founded in 1888, Bucherer is one of Europe’s most traditional family-owned companies in the watch and jewellery industry. The company is managed in its third generation by Jörg G. Bucherer and is now the largest watch and jewellery retailer in the world.
Bucherer is above all present in exclusive locations. The shop at Bahnhofstrasse 50 in Zurich has been one of the most influential and traditional establishments on the shopping boulevard since 1946. The watch and jewellery shop was rebuilt in 1965 and has since been a magnet for both local and international custom.
In order to meet the contemporary requirements for appearance and building technique, Bucherer, in dialogue with the City of Zurich, conducted a competitive study in 2015. A jury including Prof. Arno Lederer (Chairman), Prof. Arthur Rüegg and Patrick Gmür (former Director of the Zurich Urban Planning Department) unanimously recommended the Office Haratori and Office Winhov project for further development.

Bahnhofstrasse
Bahnhofstrasse is dominated to the west by large buildings: Banks, hotels, department stores. To the east – the medieval side – the structure is small, varied and surprisingly modern (e.g. Modissa Haus or Les Ambassadeurs). After three years of renovation, the Bucherer building is back among the individuals of the shopping mile: dedicated to Bahnhofstrasse, but also self-confident and individual.

Reconstruction
In 1965, architect Carl Lippert built a light shiny stone building on a compact plinth for Bucherer on Bahnhofstrasse. We have adopted this together with the order of the supporting structure. In addition, we have added oriels on Bahnhofstrasse and Kuttelgasse, as well as the vitrines into the Augustinergasse. From the former corner building between the two bends of Bahnhofstrasse, the now appropriated head of a building line has emerged.

Curtain wall
Against earthquakes, the civil engineer thought of the building as soft, so that it can move safely. Frame-like structures arranged side by side transfer the loads of the façade into the steel skeleton. A steel skin of 8mm then covers this skeleton. It forms a layer to accommodate the 40mm vacuum insulation and the hooks for the facade elements.
The structure of marble changes with the atmospheric conditions, followed by movements and possibly even deformations. Therefore, façade elements were manufactured with more favourable stone proportions, with differentiated joints and with anchors that allow for movement. Last but not least, robust stones were used, between 60 and 160 mm thick, reversing the usual hierarchy of dimensions of load-bearing wall, thermal insulation and façade panels.

Precision
Due to the construction process and the state of renovation, a construction technique was chosen for the façade which was completely prefabricated and the building had only to be dressed. The storey high stone elements weighing up to two tonnes were hung like pictures, requiring millimetre precision. The façade thrives on this apparent contradiction between archaic craftsmanship (stonemason, bronze caster) and the highest standards of precision – this is part of its beauty.
Relief
We have reinterpreted the existing flat relief of the façade. The result is a curtain façade with open and closed elements, made of precisely shaped stone. The stone relief and below it the bronze solidified in a geometric pattern suggest depth – similar to a theatre backdrop towards the city. The separately orientated faces, like the facets of precious stone, will put the façade into the light through the days and seasons – a sundial for the watch dealer.

Watchmakers
The parallels between the art of jewellery / watchmaking and the art of building become obvious at the Bucherer building: the three of them deal with material and its refinement in craftsmanship. They presuppose eyes and hands, create form and expression. Technology and precision are a matter of course for them. We have learned a good conscience from the watchmakers while cultivating complications.

Timeless
Timeless is a term common to both architects and goldsmiths. Timeless are, for example, the crystalline marble from Vallemaggia and the original metal from bronze casting. They both evoke the millennia-old cultures of stonemasons and founders.

Luxury
There is something valuable in the craftsman’s care and skill. Here the client has given them the time and opportunity to create beautiful things – luxury is also the work within the things.

Cristallina Virginio
The marble of the façade stands for the craftsmanship of the watchmaker and jeweller Bucherer on the part of the architecture – in its expression and precise joining. In the façade relief, it reveals the play of subtle refractions of light, fine shading and reflections, but also the qualities of a sculptor’s material par excellence.
Cristallina Virginio is the name of the purest vein in Cristallina Marbles, consisting of up to 99% calcite, white-ivory and delicate cloudy. The composition corresponds to Michelangelo’s Statuario Carrara and the grain size to the best marbles of antiquity. The coarseness causes the light reflections perceivable to the eye – a glitter in the sunshine.
Cristallina marble is the only marble currently mined in Switzerland. Cristallina Virginio has been mined underground since 2011. The Maurino family quarry is located above Peccia, 40 km deep in the Vallemaggia, between 1,200 and 1,400 metres above sea level.

Stone sorting
We knew about the structure of the stone and about the different veins, but not about their course in the mountain. In addition to the logistical strategy, a design strategy was also chosen, which consisted of a step-by-step sorting: from the vein to the block, from the block to the cut tranche and from this to the individually marked stones. The stones were sorted according to different element families – soft-white and cloudy, or moved-sharper and drawn more or less directed. Within the families each element is complete in itself.

Bronze Vacuum Sand Casting
The dark patinated plinth cast in bronze is the counterpart to the white-crystalline body of the building above. The partly storey-high reliefs correspond in their dimensional accuracy to the requirements of modern façade construction, but in the oblique light the soft shadows of their ridges reveal the craftsmanship, the ability to form, the same design will as that behind ancient finds.
Bronze casting has a six thousand years history. The technique was fundamentally improved with mechanisation and industrialisation. For the precision casting of the Bucherer façade, vacuum sand casting was used, a Japanese technology of the 1960s. However, carpenters and model makers, art founders and casting technologists, metal construction workers, chasers and patiners were at work for weeks and months, the work being determined by the immediate moment of casting and solidification.
The employees of the Kunstgiesserei St.Gallen cast the ground floor facade in bronze, with wall thicknesses of about 12mm. They then polished the unfinished casting to a smooth and fine finish – this surface is preserved with wax on the vitrine frames. The dark elements were patinated with metal salts – finally with silver nitrate, which gives them the cloudy, slate appearance – and waxed.

Marble concrete and wax cast bronze
Marble and bronze on the façade transport an overall shared form of luxury into the public space. They also carry the basic mood inside the building. In the stairwell they both appear in a variation of tones:
In the form of sand and pebbles, marble is the basic material for the concrete of the five-storey marble-concrete staircase. By drove chiselling, bush hammering, grinding and polishing the concrete, something of the inner beauty of the staircase was revealed – similar to the quarry in the mountain.
On the ground floor, a bronze wall leads into the staircase, wound and solidified in the casting, thin (4mm) and manufactured in a wax casting technique. The treatment and the surface of the wax model – each a unique specimen – the solidification of the wax itself, as well as the cracking of the fireclay form are visible in the rough surface structure. The silver nitrate, like radiography, suggests the material structure of the wax casted bronze.
The light-dark contrast between stone and bronze is completed by the tones of the brass railing and its steam-bent walnut handrail.