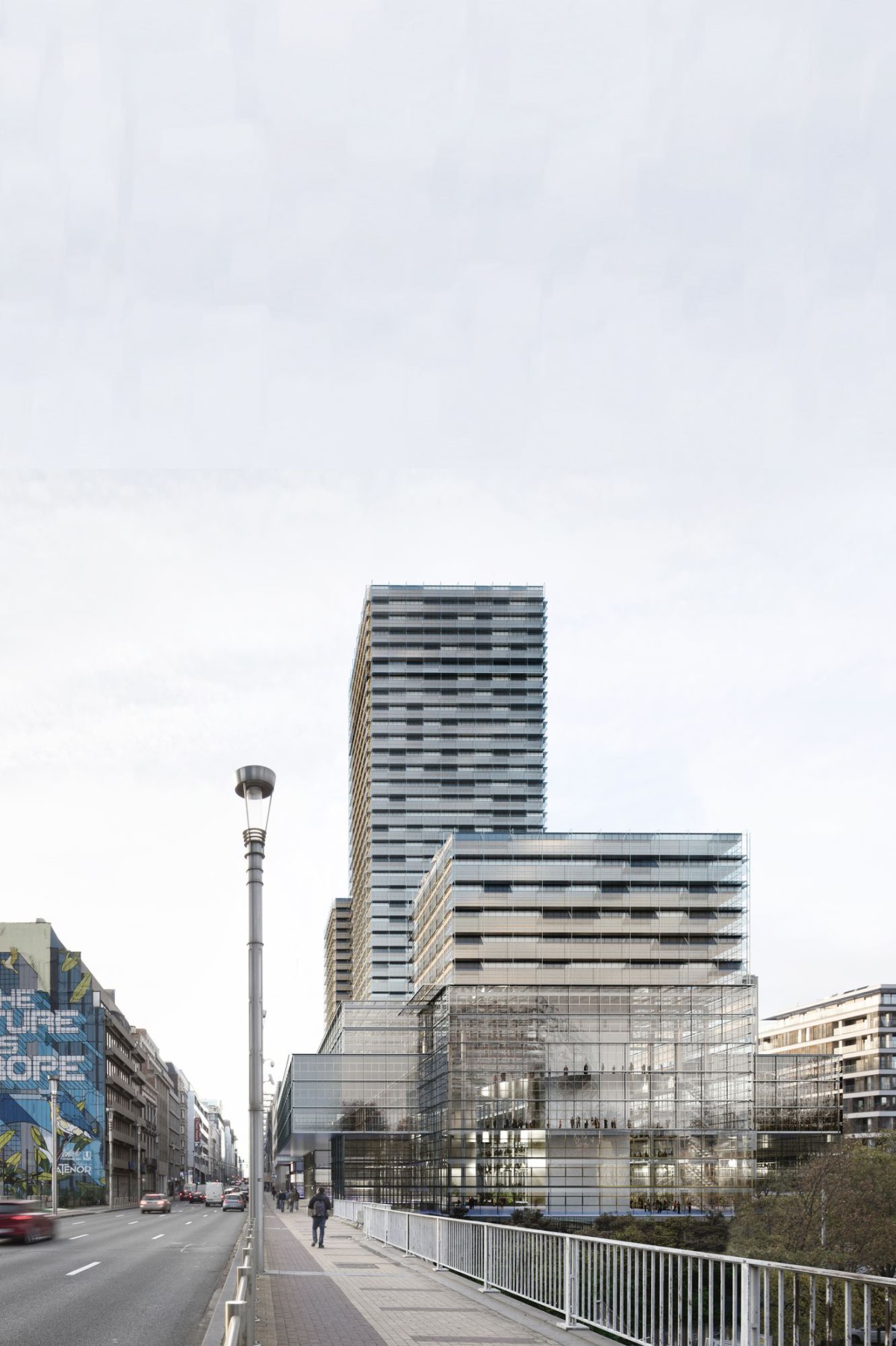 Close to the other EU Institutional buildings, the LOI130 project is to become the Administrative Headquarters of the EU. Situated inside the dense urban fabric of the Rue de la Loi, it will be, through its sheer vastness, one of the major venues for the EU.

AMBITION
How to integrate such an XXL premise in a neighbourhood that wants to be urban, mixed and lively throughout the day, knowing that the urban integration of EU premises has been a painful experience so far?
The new urban plan regulation gives a partial answer. The task, however, is to create an Institution that is less hermetic and that exchanges with its immediate surroundings.

VOID
In order to achieve this ambition the central urban and architectural element of the project is a large, glazed Void that crosses the entire site, parallel to the Rue de la Loi. Above all it reveals the internal life of the Headquarters to the surrounding city through large windows. It is a connector for all the elements of the complex and it assures internal unity.
The office programs, the visitor centre, the Day Nurseries and the Catering are all organised along, above and under this central space. It is a controlled, collective space that is structured by galleries, terraces, elevators, stairs and escalators along the façades and by central cores for the high-rises above. It is not programmed, but diverse activities – from circulation to exhibitions and events –­ may take place inside. It is also a place of spontaneous exchanges and meetings for the EU employees.
This vast and monumental space has an intermediate climate, protected against wind and rain by a glass covered structure. Exhibitions and events may take place inside.

SOLID
The building volumes are organised along, above and under the central space. A sequence of four volumes –high and low – will mark the city’s skyline. They are placed on top of their central cores that stand inside the void.
According to the urban rules that settle a play of fragmentation, variation and recess, two midrise volumes run along both main streets. Part of the program is situated below the Void and linked to the main hall through a patio.

PASSAGE
One of the proposed public spaces is a pedestrian and bicycle Passage animated by the retails and the main entrances to the EU Commission.
On both streets it is marked by a large size interruption of the midrise building volumes, exposing the Void, with corresponding public spaces.

GALLERY
Along the Rue de la Loi a large, column free gallery space mediates between the street and the building volume. It reveals the full depth of the central Void and a number of functions on ground level. On its east end it connects down to the level of the garden through covered stairway and escalators.

GARDEN
The building volume is recessed on its east side to form an entrance garden on the level of the Chaussée d’Etterbeek. The garden forms a spatial unity with the Jardin de Maelbeek and a forecourt to the Visitor Center inside. A metro entrance with views on the crossing trains is recreated on its south side.

BUILDINGS
The project is articulated in four parts: a base, low and mid raises, four high-rises and the Void. All parts are connected to the Void.
The towers are bearing essentially on their cores and on the truss structure of the Void. Their central position in the Void simply maximizes the location of first and second daylight functions in the low and mid-rise buildings along the Void.
The mid-rises essentially planned as horizontal slabs host different programmes, with the possibility of creating terraces. The between programme circulation happens through the Void.

DENSE VOID
The density of the programme and its efficient horizontal layout renders the opposing Void – a space of serendipity between the elements and diverse programme, resulting in a central encounter zone for the EU commissioner.
_