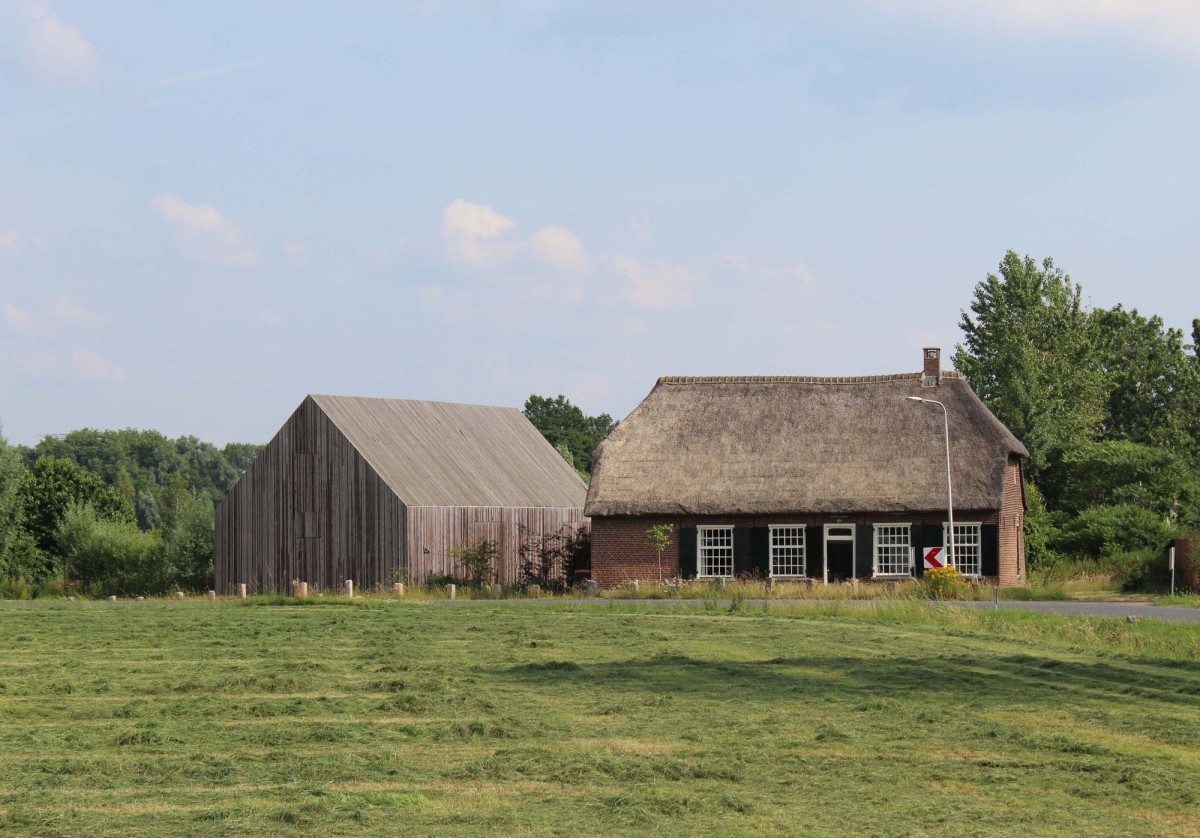 Three farm buildings form an ensemble; (I) the former farmhouse (listed building), (II) a large horse stable and (III) a cowshed. The uniqueness lies in its austerity. It gives an insight in former farm life, and can even be described as a ‘monument of poverty’. It’s like stepping in Vincent Van Gogh’s “Potato Eaters” painting. To transform the farmhouse back into the main home of the family, would require extensive building measurements and ruin all these nice characteristics. It was therefore decided to convert the farmhouse into a modest guesthouse and to rebuild the cowshed into the main family house. The large former horse stable functions as a flexible space which could be used as an atelier and for cultural events.

The Potato Eaters painting formed a leitmotif for the whole project.

Potato Shed
The former cowshed was rebuilt in the 50’s, after being bombed in WW2. The roof of the building was raised and rose above the farmhouse which distorted the hierarchy of the ensemble. We wanted to restore this hierarchy, composition and proportion and therefore decided to lower the roof of the cowshed. The former cowshed, the new family house, was completely rebuild – apart from the foundation and a few walls – and heavily insulated to new building standards.

We wanted to maintain the character that defines a typical shed or barn and searched for inspiration in the area. The main characteristics are:
⦁ simple building volumes
⦁ closed facades
⦁ a couple of large openings (as an entrance for cows and farm equipment)
⦁ simple and often just one material like untreated rough sawn timber
⦁ small openings or an open cladding for extra ventilation
⦁ the sculptural appearance formed by these characteristics

We reused these qualities for the new design of the Potato Shed. We wanted to enhance the sculptural quality by cladding the roof as well in timber. We designed a few big openings facing the sun and broad views of the landscape. The windows appear as cutouts. The details are kept minimal; large planes of fixed glass glued to a substructure.

Nowadays architecture needs to deal with lots of services, often resulting in a multitude of pipes going through the roof, forming a chaotic roofscape. We wanted to maintain the “simple” look of a shed and didn’t want to have all these pipes going through the roof. Therefore we decided to make a more sculptural chimney which incorporated all these pipes into one chimney.

Cladding
On a hot sunny afternoon whilst visiting the site we drank tea in an old part of the timber cladded shed which provided shadow and a nice breeze. We experienced an amazing play of lights going through the slim timber slats. This was our “eureka” moment and used the open timber cladding as an inspiration for the Potato shed. Next to this light quality, the open cladding is also functional since fresh air can get through the cladding for ventilation whilst keeping animals (and people) outside.

We searched for cladding which would fulfill these qualities. We couldn’t find any so we asked for raw pieces of timber after being treated (for durability). The rough sawn timber is treated (sprayed) with a rest product from sugar cane production and afterwards placed on aluminum bars to dry. The aluminium bars are still visible after the timber dries and gives the timber, next to the rough sawn quality, more character. In the factory the timber will be planed (and get a consistent and clean look) and sawn into smaller pieces. We wanted to cut out this planing process and asked the factory to cut the raw timber directly into smaller pieces. So we cut out one step of the production process and therefore the material was also cheaper.
_