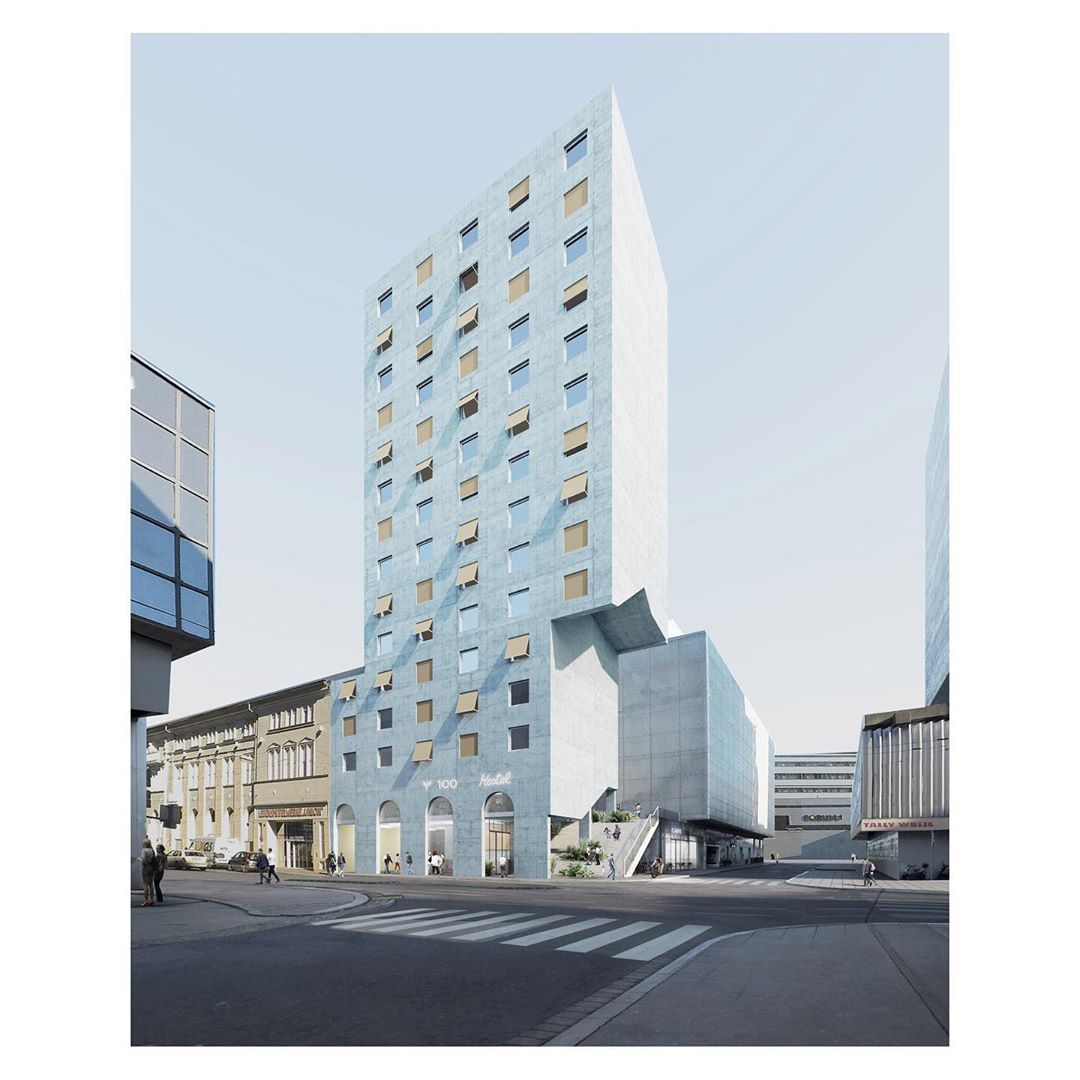 Salzburg is a cosmopolitan city- known for its music, cuisine, landscape and architecture. Thousands of visitors come to the city every day: in 2018, Salzburg had more than 1.8 million arrivals, more than Munich’s near-by population and around the size of the capital, Vienna. Tourism is an important factor on which the economy is built, but it also raises the question: how many tourists can the city tolerate? And how can places be created that not only appeal to and involve the visitors of Salzburg but also the citizens of Salzburg?

Y100+ takes these questions and themes as an opportunity to develop a space from the history of the place, for the future of the city:

Formally, the project is strongly geared to the context: the roof of the adjacent landmarked bread factory is extended beyond the site and becomes the central element of the design. The result is an offset- a projection in the building, as they are already in the adjacent cinema and pavilion. This cantilever becomes the canopy for the external public staircase. The staircase connects the sidewalk with the existing passage which invites you to linger as an elevated street and outdoor space.

In addition to the roof line, the arches of the landmarked bread factory are continued and refer to the historic buildings that are only partially present today. In the style of the buildings of the neighbourhood, a high pedestal area is created, which holds the street and pedestrian area and sets a benchmark. On this base area rests the tower, which is characterised by its shape. The design does not focus on the maximum buildable volume, but on the quality of urban planning.

Consequently, the building plot on the long sides is not fully utilised. Construction and method of construction shapes the materiality. In the vicinity of the adjacent buildings – hotel, administration and residential buildings – the tower fits into the surroundings and develops an independent aesthetic from the context. The context for the design is also influential in terms of programming: the users of the quarter – visitors and citizens of the city – come from a wide variety of countries, age groups and user groups. If you spend time here, you quickly feel that there is a lack of transit, travel and commuter traffic in high quality and inviting spaces.

One answer to this is the public ground floor zone which connects the various levels and users of the area with its large exterior staircase. The existing exits, entrances and passageways are allocated and merged. The architecture enables separate maintenance of the different functions: in the pavilion is located a gastronomy that can function separately from the hostel. The escape route of the City Center will be upgraded and guided through the transparent ground floor zone. A variety of spatial situations arise between neighbours and the coexistence of users.

The design gives an answer to the different requirements: on the part of the organiser, the city and the residents of Salzburg. This is not only economically but also of creative value.
_