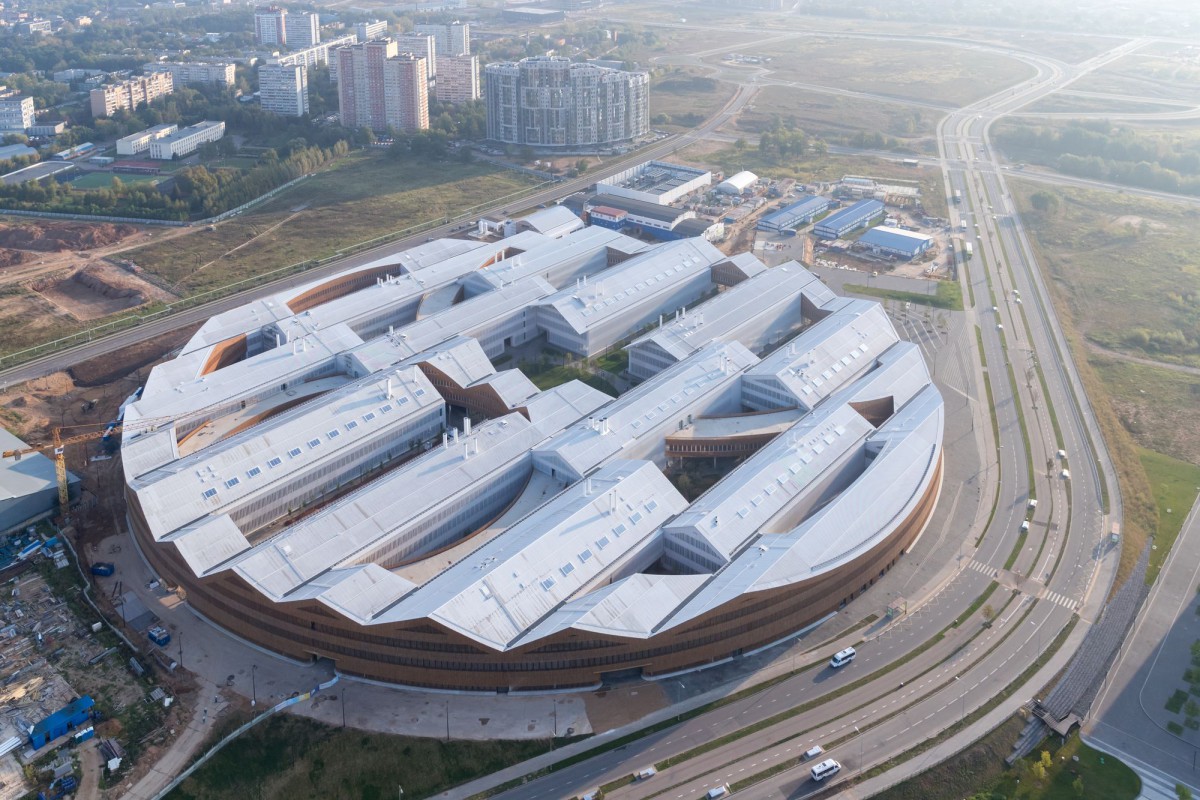 Skolkovo is a private initiative backed by the Russian government for a new urban community 16 km west of Moscow. Christened after a nearby village, the new settlement will occupy an area of 4.8 km2. At present, the locality is covered mainly by fields, meadows and woodland, dotted with industrial and derelict sites from the Soviet era. It is traversed by motorways, including the main traffic artery to Minsk. Skolkovo is the extremely ambitious and duly publicized attempt to build a new district that – unlike the erstwhile Soviet satellite towns – offers inherent urban quality through a vibrant mix of uses. No less important is the aim of creating a globally reputed centre for innovative twenty-first century technology, embracing the research, production, administrative and even headquarter facilities of new companies, as well as schools, institutes and a university.

To speed up implementation, the Skolkovo management team kick-started the ambitious project in 2010 by appointing distinguished architects and designers from across the globe to submit proposals. After a competition procedure in 2011, a conceptual master plan was put in place as the basis for elaborating the individual schemes. Herzog & de Meuron was commissioned to design Skolkovo University, a project which first necessitated the drafting of our own master plan in tandem with the architectural development work. This master plan and the conceptual study were completed by the end of 2011. The scheme comprises Skolkovo University itself, to be developed in two phases, together with proposals for a complete residential district housing students, teachers, professors and other new residents attracted to the new location. The designs for this residential quarter will be fleshed out in a subsequent phase starting in 2012. For this, a mandate will be awarded on the basis of a design competition for which Herzog & de Meuron will invite entries from Russian and international, though preferably young, architectural practices.
–

Skolkovo – University
A new university for Moscow, for Russia, for the whole world – that is the political and economic intent, and the scientific aspiration. What then is the matching architectural vision? A new facility built, as it were, from nothing; a newly founded institution that starts from scratch. We experimented with numerous models, carried out typological studies and compared those university facilities we deemed successful with our own brief and the options available on the Russian site. The common denominator among the global exemplars is that the university is integrated into urban life. It is never entirely secluded, as was the original intention behind the campus or “redbrick” concept. The aim then, in Skolkovo, is to create a whole new district imbued with civic life: living, working, shopping, journeying, relaxing… Another common feature of all the successful models is a nucleus, a distinctive centrepiece that can be extended and enhanced. The resulting urban “organism” retains its unique and distinctive character even after many years and – as, for instance, with Harvard Yard, MIT, Oxford’s colleges – firmly roots the university in its setting, not only as an institution, but as a physical and spatial entity. From the many proposals developed in-house by our team, we finally opted for a scheme based on three differently sized circular forms. A cylindrical shape that rises up from the middle circle will house the new university’s agora and, visible from far, will at the same time make reference to the Moscow State University tower. This agora will accommodate key public functions such as administration, the Dean’s Office, a faculty club as well as libraries and other amenities open to the community at large, such as cafés, bars etc. The two adjoining circles define the outer perimeter of the university. The interior of these circular shapes is filled out by a linear system of courtyards and building volumes housing the laboratories and offices of the five departments. The external perimeter and internal segments of the circles read as city boulevards: as places of movement, of arranged meetings and chance encounters. There are spots to linger, both indoors and outdoors, i.e. in the inner courtyards and gardens of the complex.

The round exteriors lend the new university its own architectural identity as a new institution, single it out as an independent entity within the concurrently evolving district, with its clearly defined centre, residential quarters and business districts. The new university will thus assume a distinctive, sculptural form that sets it apart from the other buildings in the masterplan. The scheme nonetheless remains fully integrated in this masterplan by virtue of its low-rise, only 2-3 storey architecture, numerous openings and views into the interior, the gardens and traditional materials – all of which create a spatial permeability while shunning monumentality and ostentation.

The new university is organized into five faculties: Energy Science, Biomedical Science, Information and Technology Science, Space Science and Nuclear Science. The space requirements of each faculty include, in a ratio of one-third to two-thirds, public facilities (library, student centre, administrative offices, conference rooms and classrooms) and laboratories (dry labs, wet labs). The departments are not configured as fully self-contained units, but make provision for spatial overlaps in the functions and activities of both teachers and students.
Herzog & de Meuron, 2012
–