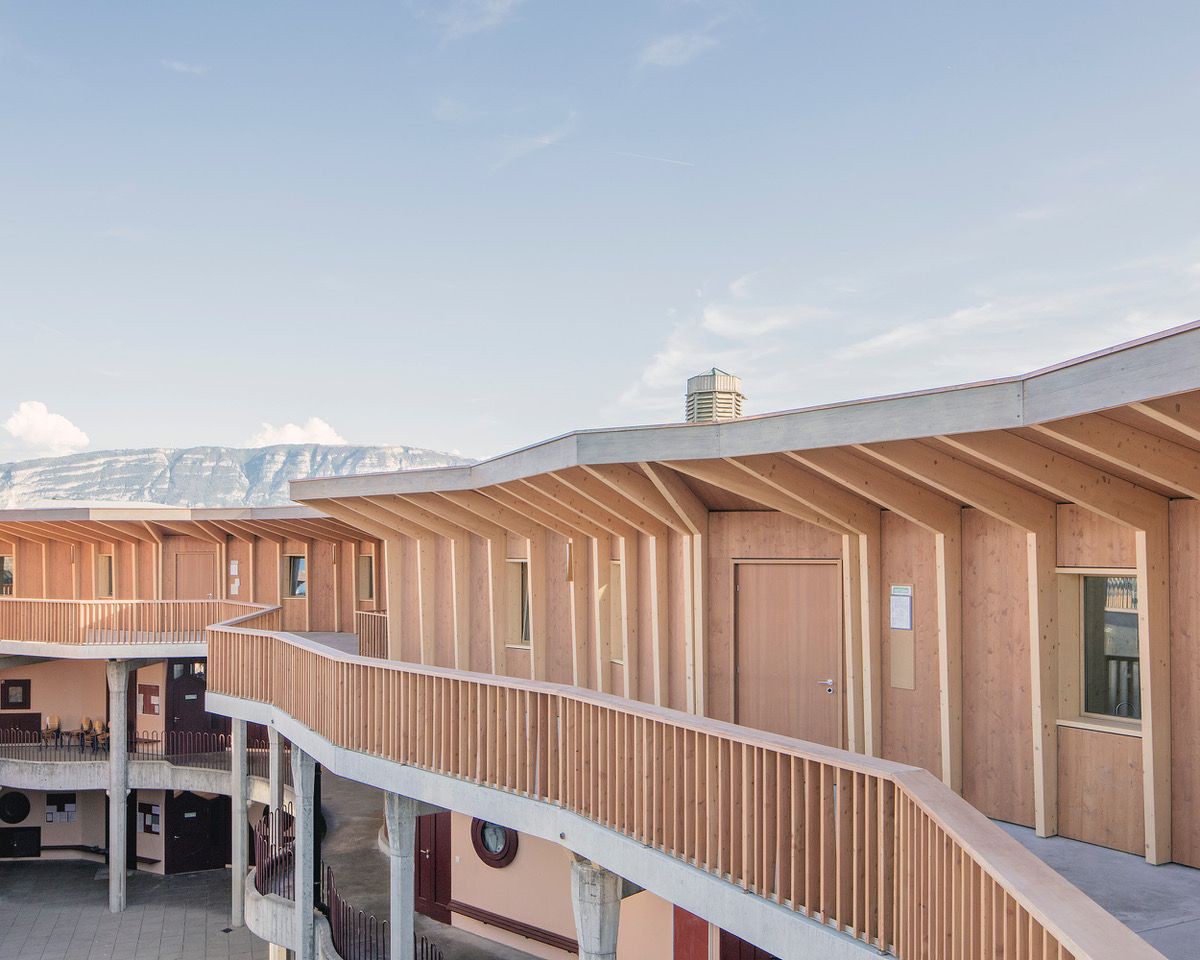 RISING SPIRIT
The starting point for considering how to expand the school was the school itself: an analytical examination of the site, its access routes and buildings, their qualities (and defects) – but also a taking account of the spirit of the place, its inspirations and aspirations. The school buildings, designed and realised by the architect Jean-Jacques Tschumi in the late 1980s, are characterised by their organic forms, enclosing a courtyard towards which the circulation spaces flow. The inward-looking (uncovered) courtyard offers a prelude to the outward-looking teaching spaces, oriented towards the landscape and following the sun’s path through the sky. The building is a celebration of Rudolph Steiner’s assertions in a lecture on the aesthetics of form (Dornach, 5 July 1914): “the laws of aesthetics, the laws of form, have their foundation in the Cosmos on the one hand, and in human nature on the other”.

Tackling a project like this – adding height to a building epitomised by its vibrant expression of circulations, movements and the people using and embodying it, students of all ages and teachers – posed a particular challenge. First of all it involved understanding and respecting the spirit of the site and the school, and seeking to rediscover the essence of the initial design, with its radical development around a central point. It involved interpreting this design in a contemporary way and heightening its inherent structuring principle using 3D technology.
Working organically with Tschumi’s design presented the architects with a conundrum: two steps on a staircase rising from the final landing and ending in a wall suspended in mid-air, and the colonnade of modelled pillars on the courtyard extending upwards towards the sky, all seeming to anticipate a continuation – a culmination. The missing link, perhaps, between the site and the sky above it.
_

The main staircase was extended, leading to a new storey comprising seven classrooms. The existing concrete structure supports the new framework. The new walkway is covered, its design structured by the consoles of the framework and the doors to the seven classrooms. The teaching spaces represent a 3D synthesis of the nine-sided classroom floorplans and the “topographical” roof crowning the new structure, incorporating large skylight windows, while a large glazed façade overlooks the Salève mountain. The classrooms are entirely panelled in wood. Digital design and production technologies have fulfilled aspirations expressed on paper thirty years ago.

The way the various elements are assembled to form a structure becomes apparent through the experience of moving within it. The organic nature of the space is revealed in a journey, each element of the building underscoring the school’s holistic coherence within its environment. Relating to the building, to the environment, is therefore not a fixed and static phenomenon but something evolving, flexible, natural, attentive to purpose and attributing qualities of adaptability and intrinsic intelligence to its different layers.

CRAFT AT THE HEART OF A NEW VISION

Right from the initial designs, this project involved close collaboration with the carpenter, paving the way for a detailed, ongoing dialogue with the craft professionals involved. The use of 3D technology brought together cutting-edge technology and age-old expertise, creating a new mode of collaboration and a shared language, moving beyond conventional practices to create innovative, inspirational solutions – in both technical and human terms. Through this kind of close partnership the architect becomes more intimately involved in the physical production of the building, suggesting a new vision of architecture as a profession. This was the key to completing, in 3D, the complex 2D geometry developed in the 1980s, as well as solving the conundrum posed in 1986.
A LIVING SCHOOL

This construction of a complete new floor of classrooms was realised above a school that continued to operate as usual, the schedule of works arranged to synchronise with holidays and the rhythms of school life. The design of the new floor also took account of the surrounding landscape – a neighbourhood that had changed since the initial construction project. The new structure was made almost entirely of Swiss wood.

The students themselves took part in the construction process on a regular basis, with tours following the progress of the project at key phases, giving them an understanding of the project’s implementation. And so the entire project had an educational dimension; in itself it became an act of passing on knowledge to the next generation.
_