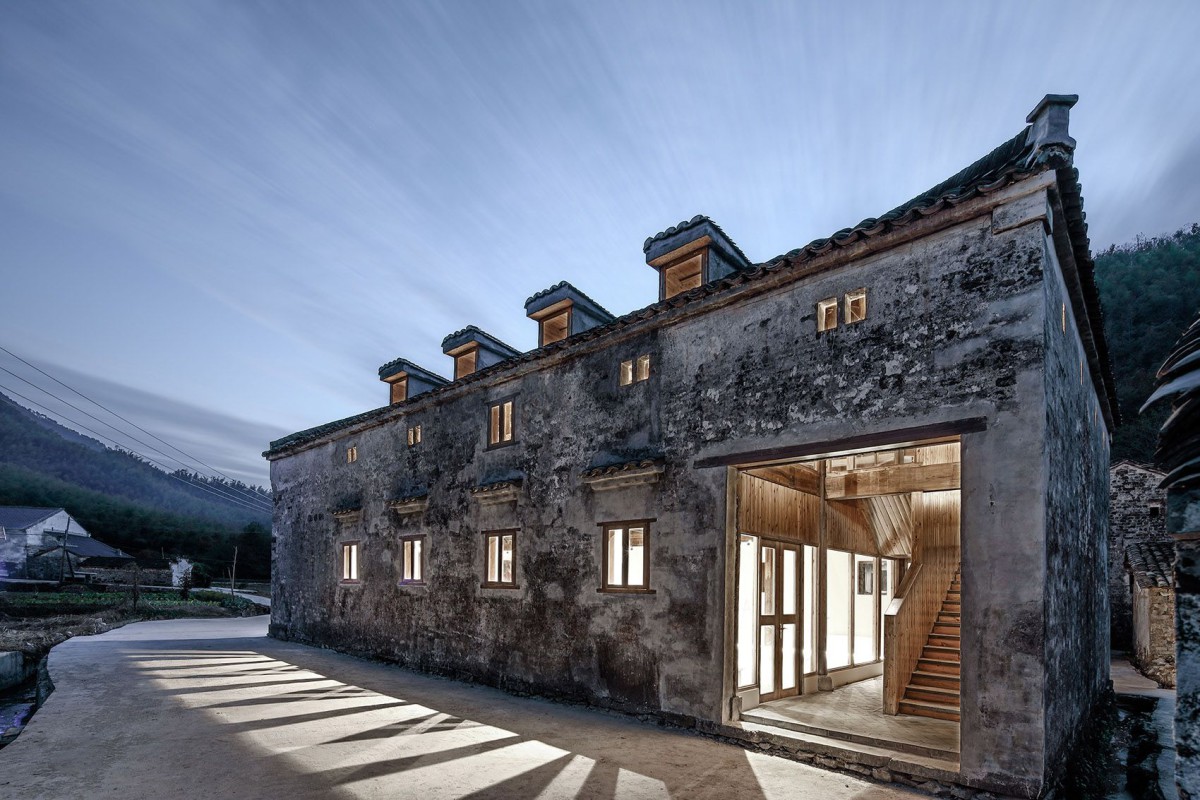 On the mountainside of Guniujiang Resort sits Qifeng Village of Shitai County, Chizhou City, Anhui Province. Our first visit there took us an hour’s drive around the steep and winding mountain roads. At the entrance of the village stood two ginkgo trees, which were said to be over 1,000 years old, with trunks so strong that at least two or three people were needed to encircle one. Flat farmlands with crops as tall as a man stretched in front of the village, and farmhouses with white walls and black tiles lined along the hillside. Qifeng Village seemed to have receded into the bamboo groves in the mountain.

On first sight, houses in the village revealed roughness simple and practical. Unlike Huizhou courtyards with complex layout and mansions with delicate decorations, the village houses stayed simple with black-tiled pitched roofs and square windows revealing a sense of time, while draped eaves and gable walls were the only decorative elements. Buildings at the entrance of the village were mostly for public use, such as mills, tool storage rooms and the commune’s house, while villagers’ homes receded deep into the mountain.

The two-storied commune’s house was once a public place for Qifeng Village’s production brigade. The lower floor was used for tool storage, crop processing and material hoarding, while the upper floor was used for meetings and breaks between working shifts. Nowadays, with the withering of villages, the tools in the first floor were idle, and a few motorcycles turned the space into a temporary parking lot. Moreover, the second floor was unoccupied due to rain leakage and lack of maintenance. However, the fine stone plinths under the wooden pillars could still be seen through the gaps between the piled-up stuffs, and we could take a close look at the simple and straightforward mortise and tenon work on the roof truss, which could be described as masterwork by local craftsmen in the old days. The curves of the tree trunks could still be seen on the wooden beams and rafters, and the mortise and tenon work, though seemingly random and decoration-free, were made in compliance with the principles of carpentry and mostly undamaged and usable now. Carpentry drafts and political slogans written with chalks and ink brushes were all over the beams, pillars and walls, serving as a record of the village’s history in the house.

Such a house might seem to be of little value to villagers, but for architects, it was just like an uncut jade to be carved into great works. Ancient villages in Anhui Province are always in some sort of inherent harmony with nature, with their layouts, roads and drainage systems in compliance with the terrains. Besides, the scales of the villages are mostly compact in an appropriate way for less farmland occupation. In the context of a philosophy featuring awe for nature and self-restraint, the best solution to village renewal would never be building new houses over old ones, not to mention undisciplined occupation of land. Instead, we proposed renovation and moderate transformation of the preserved commune’s house, so that it can serve people’s life once again, rather than be deserted and forgotten like an old-fashioned article. We call such a project a “buildingless building”.

Under this premise, the future commune’s house should be used by both villagers and visitors. For local residents, it would be a public lounge where they can gather and chat over a cup of tea. For visitors from outside, it would be a museum showcasing the history and features of Qifeng Village. After on-site survey of the house, the status of the house could be described as follows: The overall timber structure and structural carpentry were in good condition, with just a few timber beams decayed on the surface, which could be polished or partially replaced. Joinery and non-structural carpentry work (mostly doors and windows) were generally deformed and should be replaced completely. On the exterior brick-filled walls, the clay mortar in the brick joints was mostly detached due to lack of maintenance, with lots of exposed brick joints in need of jointing and reinforcement. As a result, our renovation strategies were made in accordance with the following principles:

Before getting down to the renovation work, the designers and craftsmen checked the status of the timber structure and walls, and decided on renovation methods for the most crucial parts, including the roof, the timber frame and the exterior walls. On the roof, only one layer of small black tiles were laid for rain proof, where lots of leakage points could be found. As a result, new timber roof boarding and waterproof membranes would be laid underneath the tiles. As for the main structure, the pillars and most main beams were well preserved, with only a few decayed and moldy spots to be polished. Most rafters were decayed as they were close to the tiles, so all of them would be replaced. The original openings on the walls were small, among which were some ventilation holes no larger than a brick. Considering the local climatic feature of hot summers and cold winters, new clerestory windows were added, one at each column span for better ventilation, especially in spring and summer with excessive heat and moisture.

On the exterior brick walls with white-ash paintings, built in the most common way in Huizhou region, some cracks could be seen on the surface, and the joints of bricks underneath were already empty as the mortar had gone off. As the brick joints were highly relevant to structural weakening, we consulted structural experts and suggested re-jointing of the brickwork for better structural integrity. The exterior walls were just like a miniature history note, with simple traditional paintings, slogans of the Great Leap Forward period, and drum-shaped bearing stone tucked in the walls to avoid destruction in the Cultural Revolution. To preserve all the information, the ash painting avoided the areas with “historic records”, so that people can read these information of the past layer by layer from the skin of the building.

The original commune’s house had two floors covering all spans, with the staircase located in a span in the middle. The span neighboring the eave had a net height less than 1.3 meters, forming an unserviceable space. So we transformed the space at that span into a double-height one. Plus, at the span on the opposite side of the house, we made some very crucial changes: walls on both sides of the span, as well as the floor slab of the 2nd floor were removed to form an interior double-height “street”, where the staircase were relocated. In this way, the formerly interior space was transformed into a public street, enlarging the interface between the hall and the visitors, as well as enabling people to have an overview of the exhibition on the 1st floor and get to the public space on the 2nd floor directly. Moreover, the 1st and 2nd floor were connected through the double-height space, forming views for people inside both spaces. These measures have made it possible to separately operate the exhibition hall on the 1st floor and the villagers’ lounge on the 2nd floor, presenting a space of “double operation units and multi functions”.
_