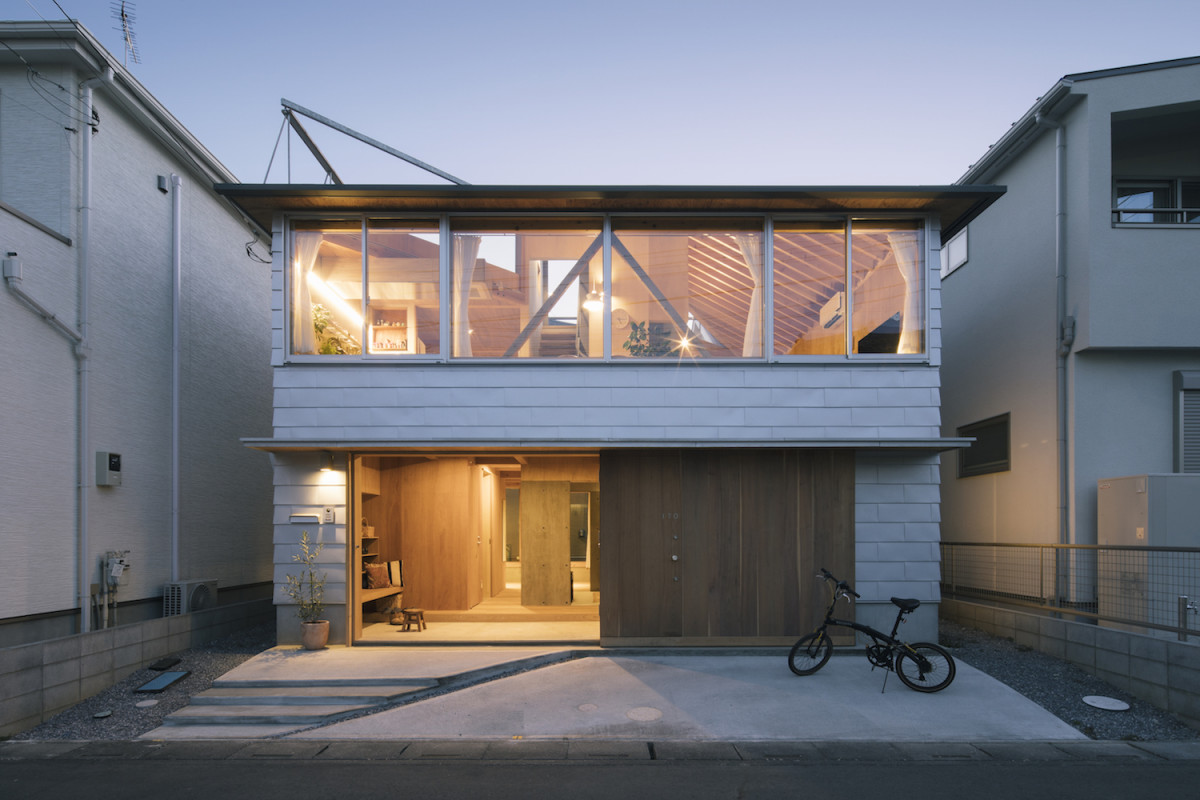 A single-family house designed in suburbia of Tokyo. Instead of regarding a suburb as a subordinate of metropolis, this young couple’s suburban life could be truly centered by working more then three days a week from home. This change made us to come up with a new (or non-modern) house-type with the same budget as the neighboring mass-produced houses. It required much more diverse spaces to accommodate their working environment and places for multiple hobbies (indoor-outdoor), without increasing total floor area.

The tiny nine square grid plan is applied, whose dimensioning is based on two kinds of modules in Japanese construction; 2430mm module and 1820mm module. 2430 x 3 = 1820 x 4 = 7280. 2430 became the module of floors, while 1820 became the module of walls, dealing and playing with economy/convention of dimensions in construction. The overall plan is made as a collective of fragmented places for different behaviors throughout the stacked grid. 2430 x 2430 is too small as a room, but too big as a spatial unit for one person’s activity. The grid corresponds neither to behaviors nor to rooms. Therefore, this house with rigid tectonics would invoke one’s imagination for the production of space, linking one behavior to another, inside and outside, without fitting too much to what can happen inside time to time.

Without losing the simplicity of construction, the design accumulates decisions to hybridize its spatial qualities. For instance, the roof plan is separated in 45 degrees to create low/high ceiling space at 2F, as well as inviting the southern light towards the living-dining area. The concrete exposed to the interior is constructed as a foundation. The foundation looks similar to neighbors from the outside, but the floor levels inside are shifted closer to the ground, creating the level difference from surrounding windows. Learning from the old townhouse / farmer’s houe type in Japan, the entrance door has two way opening system, normally working as a hinged door, occasionally working as a large sliding door to connect the “doma” space with the outside.

The clients brought us a non-modern imagination of the suburban life in Japan, as a hybrid of natural and urban environment, and as a middle point between metropolis and nature. Our attempt in this project is to respond with non-modern architecture to amplify the imagination, learning from new and old histories of lifestyles, and architectural languages.
_