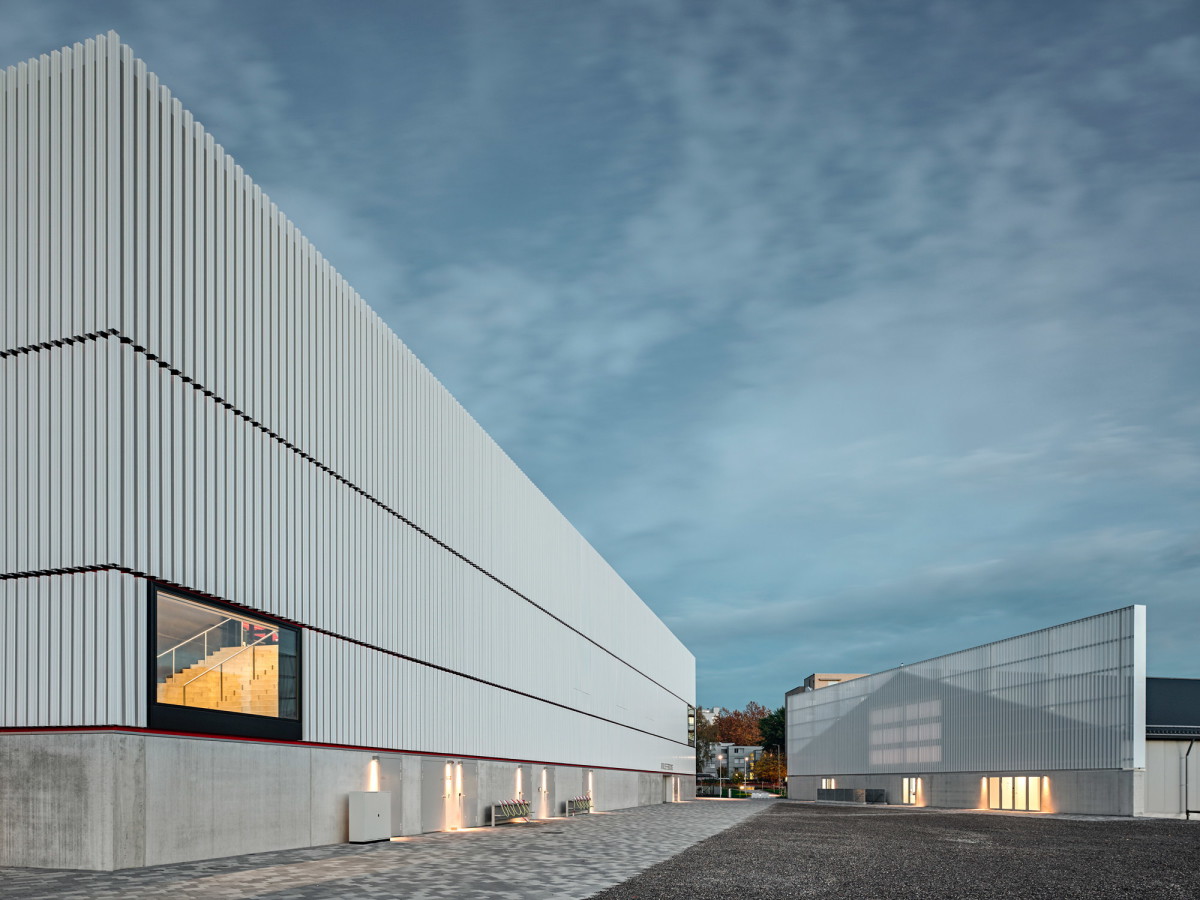 The WIN4 Sports Centre in Winterthur is located beside the existing Deutweg ice arena. Catering for both mass and top-level sport, this new project is intended to have an impact far beyond the city of Winterthur. On this account a kind of architecture was aimed for that translates these national and international ambitions into a memorable architectural language. Three distinctively different building volumes form an ensemble and define a shared outdoor space.

The first phase consists of a new building for a ball sports arena and an adjoining campus building. In the second phase, the Sports Wing 2 is to follow along with other sports-related functions. The three buildings are connected by a central covered foyer area. Through the strategy of using three independent buildings, a clear urban statement can be made already during the first stage. With the erection of Sports Wing 2 in the second phase, the central circulation space will be clearly defined in spatial terms. A smaller, multi-function training hall augments the ensemble and a six-part gym hall is intended to complement the sports cluster in the future.

The large ball sports arena, which swivels outwards to the south, is the new home for the handball players from Pfadi Winterthur, the Uni hockey association and other Winterthur sports associations. The heart of the arena is a central pitch, surrounded by raised spectator stands that provide space for up to 2000 spectators. All the necessary ancillary spaces such as changing rooms, press rooms etc. are accommodated at the entrance level. Staircases positioned at the sides bring visitors up to the first-floor level. Here generously dimensioned circulation terraces lead to the stands, numerous areas for refreshments, the VIP area, and the sanitation facilities. An underground garage in the basement of the ball sports arena offers 125 parking spaces.

The neighboring five-story campus building houses numerous sports functions, all of which are reached from a centrally placed staircase. Sports medicine, fitness with integrated wellness facility and a sports school with classrooms augment the functions of the sports cluster. The multi-functional training hall is a ‘decorated shed’, which relates visually to the buildings of the first phase in the north and at the same time takes account of the existing district center to the south. The outdoor spaces around the new sports center consist of an arrivals area with an urban character, a landscaped district park, and the large lawns of the sports pitches. With its public pathways, the new sports park has additional value for the neighboring residential districts as a place to spend leisure time.
_