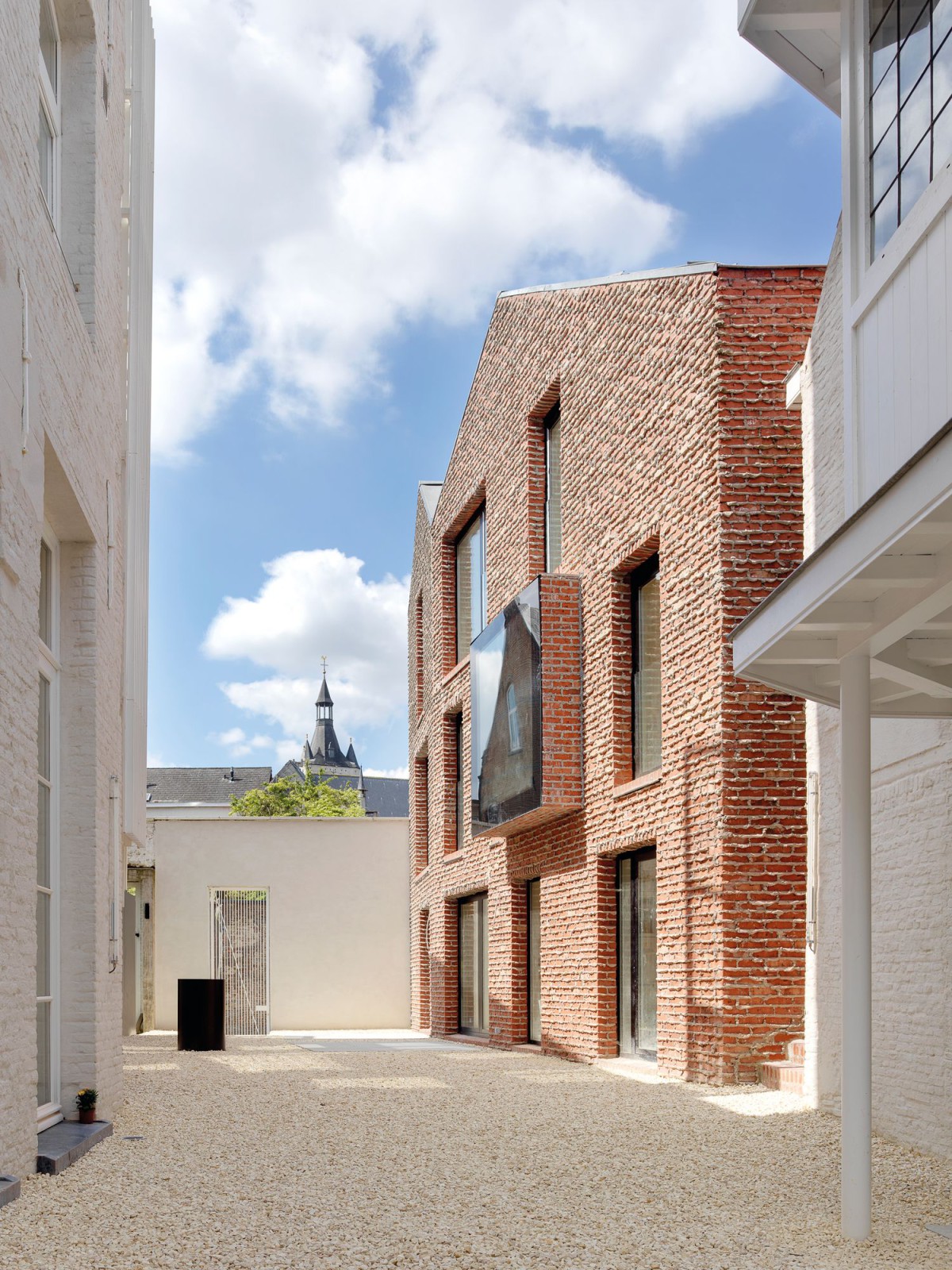 Site Apostolinnen is a project combination of a new building, renovation and restoration. The client asked dmvA initially about the possibilities of the site where his bed factory was located. Based on an archaeological research, a non-binding master plan was made that divided the site in different housing units. In the middle of the site was the ‘Somerhuys’ (‘Summer house’), of which dmvA did the restoration as a first assignment. Later the entire master plan was taken into option by the client and dmvA became the engine behind the project ‘Site Apostolinnen’.

In the 20th century, the old convent site was transformed into a fully packed plot on which almost nothing of its original history was found. It was important for dmvA to bring back the genius loci of the site, and respect and recover its historical elements. That’s why they based their architectural and urban design concept on the historical research of historian P. De Greef.

In the Middle Ages the site consisted of several houses with different owners. In the beginning of the 17th century, the site became more as a whole, because different lots were bought together. The hoff ende huys (the garden and the house) was then sold to several individuals a couple times, until the Apostolins settled in Mechelen at the beginning of the 18th century. They bought the domain and expanded it with new buildings and by buying adjacent plots. The domain then transformed further into homes for the middle class and became a real housing complex. In 1926 the fully-built site became a mattress factory until the start of the new construction project.

The site is located between the Onze-Lieve-Vrouwestraat, the Lange Nieuwstraat and the narrow Tessestraat. According to the historical research, many streets and alleys have disappeared since the Middle Ages, including the Moriaenstraatje and the Hellestraatje. The Hellestraatje was located parallel with the Onze-Lieve-Vrouwestraat. dmvA decided to bring back the alleys by cleaning out the inner area of the site. In this way the historical volumes are given space and thus shown again. New outdoor spaces are created that make the inner area liveable.

In the middle of the site is the Somerhuys from the 17th century located. According to the research, this building only used the sun as a heat source. Now all the windows are still facing the South. The house has been restored and is now used as a private home. As an extension of the central Somerhuys, the worker’s house from the 20th century is situated at the Tesssestraat. This building is now a guest house in the private garden of the Somerhuys. In order to keep the basis of both houses integral, the black contemporary stairs were placed outside of the buildings. At the Somerhuys the vertical circulation is placed in a glass bay window.

Behind the Somerhuys is a Warehouse from the 18th century situated, which was a part of the convent of the Apostolins. The building is now divided into 8 studios for students.

In the Onze-Lieve-Vrouwestraat there are two 19th century buildings with commercial spaces on the ground floor. Six residential units have been installed behind and above the shops, including a new building with two triplex houses. The new building serves as a catalyst for the entire site: it is a brick monolith with external staircases that, in combination with the alleys and the patios, ensure new circulation on the site. Via the stair construction, the homes behind and above the retail spaces are easily accessible. The new building is a superlative in brick stone architecture, that stands out because of its tactility through the weeping mortar joints in the masonry. Next to the new building there is restored bay house from the 18th century, which also houses a triplex house.

The project involves a cross-pollination between old and new, with respect for the historical building structure. Honesty played a major role in this: the contemporary additions are shown openly and are emphasized by the use of black lacquered metal, such as the castings of the found water wells, the stairs at the guest house, the skeleton of the glass bay of the Somerhuys etc. The windows in the new building are analogous to the 19th century windows, which are put deeper into the wall most of the time. The wall around the original convent garden was kept and lowered to the original capstone.

Besides the revival of the history, ‘quality of life in the city’ was an essential starting point for the development of this project. By converting the site to a residential complex around a semi-public space, connected by the inner streets, dmvA tried to create a village-in-the-city feeling. The texture of the urban fabric was preserved, and the rhythm of the city was continued.
_