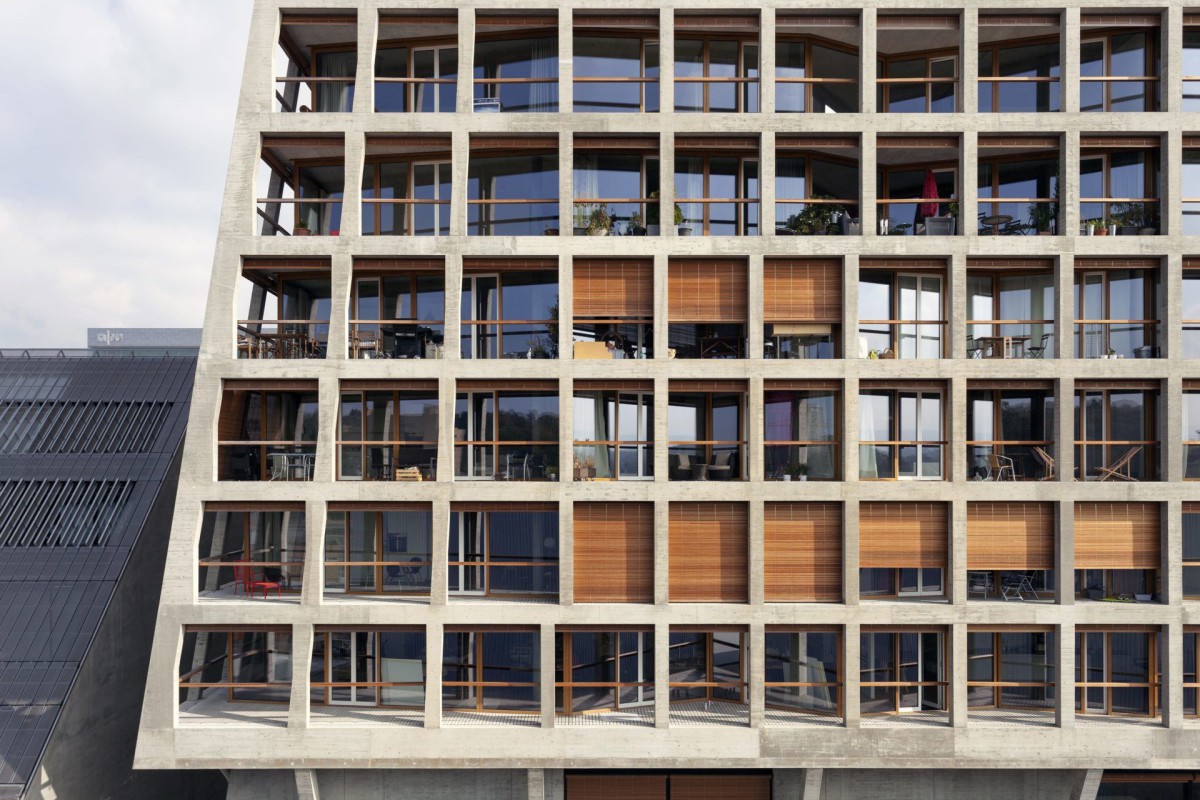 Helsinki Dreispitz, a project initiated and developed by Herzog & de Meuron, comprises an archive and apartment building on Helsinki Strasse at the Dreispitz area in Basel. The warehouse contains not only the substantial archives that have accumulated since the establishment of Herzog & de Meuron in 1978 but also a collection of artworks acquired largely from artists with whom we have worked for many years. Until now the archives—plans, documents, drawings, sketches, samples of building materials, models and model fragments in different sizes and materials— were stored in several different places, making it difficult and inconvenient to source, organize and study them, for instance for publications or exhibition projects. All of these holdings are now under one roof in the Helsinki Dreispitz premises, which meet contemporary conservatorial needs and logistical requirements. The key task is the storage and care of the archives. Making them, or parts of them, accessible for research and study is one of various future scenarios.

Dreispitz, an Upcoming Neighborhood
The Dreispitz, an urban site covering some fifty hectares, is privately owned by a single proprietor, the Christoph Merian Stiftung (CMS). Originally used as a goods warehouse and later as a customs depot, its development, governed by unconventional rules, has led to a fascinating hodgepodge of architectures and uses. The streets bear names that conjure the wider world: Helsinki Strasse, Florenz Strasse, Oslo Strasse. There are railroad tracks and a strictly gridded street plan, similar to an American city. The area has now developed into an experimental melting pot for a variety of urban activities—a place of rampant growth not just in terms of its unplanned, rambling vegetation but in social terms as well. Because a location of this kind is so untypical and extremely rare in Switzerland, we were more than happy to take on the commissioned urban study. One of our aims was to propose planning phases that would not be governed by the dictates of a rigid master plan, but rather by open-ended processes that would reinforce the existing urban diversity while also allowing for a substantial increase in density. Instead of a tabula rasa, we proposed juxtaposing various architectural typologies so that small, structures would stand next to large-scale objects, mirroring the strategy that is already in place in the area around the Schaulager at the southern end of the Dreispitz.

The proposed metropolitan analogies—Manhattan, Soho and Queens—are intentionally provocative images as leitmotifs that provide ample latitude for specific individual projects. If the scope it offers is intelligently exploited in the years to come, the Dreispitz is set to become one of Switzerland’s most distinctive neighborhoods in terms of both to typology and substance. A first, significant step in this direction has already been taken: the relocation of the Academy of Art and Design with some 1000 students and lecturers in the summer of 2014. The university is housed in existing industrial buildings as well as new, purpose-built premises. The Dreispitz commission was of particular interest to us because we have spent years studying the development of the trinational, metropolitan city of Basel and have repeatedly advanced ideas and proposals based on our research. This is the largest test area to which we have now been able to apply our findings. One of our pet recommendations has been to develop new, border-crossing neighborhoods in which people from France, Germany and Switzerland can live together unimpeded by the boundaries and intermediate zones which are such enduring remnants of the region’s World War II defense strategies. The Dreispitz is the first urban neighborhood in which a borderline between two cantons has become invisible; the borderline between Basel-Stadt and Basel-Land. A trifling achievement, one might argue, but in view of Switzerland’s notoriously parochial mindset, its disappearance is a milestone in the country’s history.

The Building
We knew from the start that we wanted the project to be more than just a building to store our extensive archives; we wanted it to be a place that generates manifold incentives for the upcoming Dreispitz neighborhood. Conceived as a “Campus of the Image,” the Academy of Art and Design will move into various buildings nearby and it was therefore important to underscore the appeal of our project by offering students from all departments of the Academy the benefit of doing research in our archives. Another vitally important factor was to produce housing that would infuse the neighborhood with new life both by day and by night. The 41 apartments above our archives, which we developed in collaboration with our co-investor, are a pioneering achievement as the first-ever residential housing in the Dreispitz. On the market as of 2014, these apartments enjoy an exceptional panorama of the surrounding countryside of Bruderholz and the Brüglinger Plane with the botanical gardens and the St. Jakob Stadium—a privilege that is ordinarily the preserve of more rural environs. Nonetheless, this will be an extremely urban, dense site. The distinctive shape of the building, tapered towards the top, ensures that the neighboring buildings have sufficient daylight. The façade of raw concrete is marked by the horizontal formwork of narrow wooden planks. Over the years, the rain running down the concrete will make the surface structure resemble the bark of a tree. The few windows placed in the façade are large and designed to provide enough daylight for archivists and students at work. Specially designed cabinets and display cases ensure that all of the models in the storerooms can be seen and are easily accessible—echoing the spirit of 19th-century natural history collections.