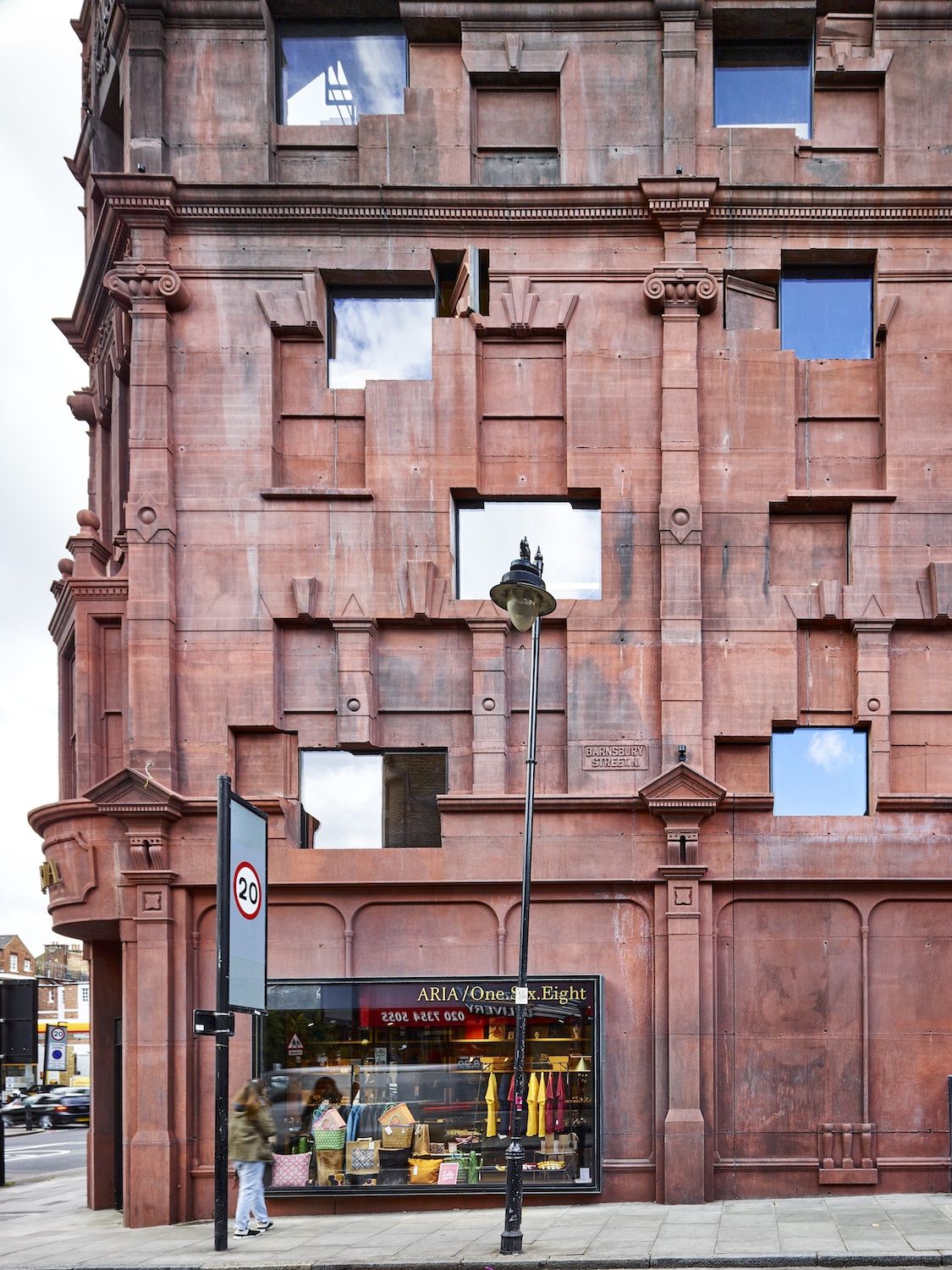 The parade of buildings between Waterloo Terrace and Barnsbury Street, of which the proposed site forms the north corner, act as a prominent and all but intact late 19th Century block fronting Upper Street. In spite of the of the uniformity of heights, party-wall and shopfront/townhouse rhythm the original composition conceived as a symmetrical Palladian palazzo with a defined centre, extended ‘wings’ with end ‘pavilions’ is strong enough to question the missing part. This part, 168 Upper Street was significantly damaged during WWII and eventually demolished in its entirety. Remaining empty until Aria, a local design and furniture retailer purchased it in 2012, held an invited design competition for proposals before taking it through planning approval and now construction on site.

MEMORY + THE MISREMEBERED
Given the otherwise wholly intact nature of the block and good condition of its detailing our approach has been to remember or rather misremember the missing piece. After all we cannot build using the same materials to meet today’s standards and arguably why should we given the opportunities available to us. Similarly, of the multitude of creative options possible, the idea of looking to the past and the past looking back seemed so full of possibilities. We therefore began by simply aiming to return the original symmetry of the palazzo in all its form and detailing. But as a full height double skin insitu terracotta/cement mix fully loadbearing structural shell, conceived as a 1:1 monument cast from the building bombed during WW2.

Very much drawn from Rachel Whiteread (Ghost House, London), Do Ho Suh (Home within Home), Diener+Diener (Natural History Museum, Berlin) and Edouard Francois (Hotel Fouquet, Paris). All external mouldings, window surrounds and features as well internal skirting, dado rails, cornices and anaglypta wallpaper were modelled. The CAD information then robotically routed into expanded polystyrene formwork before the mix was poured in. In order that this effort isn’t seen as an attempt to perfectly mimic the past, instead alluding to memory, indeed misremembered pasts the finish is monolithic, slipping in areas, imperfect and in some parts wholly misplaced. Has the CAD information been emailed incorrectly, did the robot reboot and drop few lines or have the site crew put one piece of formwork in the wrong place. As well as reminding us that our ideas/memories of the past are often edited and adjusted to suit our present and futures, the notion that the ,’making/constructfon” is also misremembered suggests that what we feel is rational and controlled is also fluid.
Within the monolithic cast shell, new internal floor plates literally represent the new habitation pattern. Located where convenient and of a very different and gentler material, the Cross laminated Timber Floor plates are alien to the monument and carried through with new domestic windows cut where required without respect to the older window locations or their surrounding neoclassical detail. Windows have minimal frames with both fixed and operable terracotta panels being recessed into the facade, enhancing the detailed reading and mass of the cast terracotta structural shell.

INHABITTION + FURNITURE
If the structural shell alludes to the past and timber floor plates to today’s potential occupiers, their open floor plans are left as ambiguous space able to accommodate multiple purposes, a tabula rasa awaiting definition. As providers of contemporary furniture the client, Aria are aware that carefully selected and combined items can help define purpose and space. To maintain that ambiguity, the potential for change and redefinition no partition walls, doors with surrounds and bulkheads are installed as these become amalgamated with floors and ceilings to delineate and fix space before it is inhabited. Instead floor to ceiling cabinetry pieces with rebated shadow gaps to disengage from floors and ceilings are dispersed across the plan. Their arrangement beginning to define adjacent spaces. Equipped with drawers, cabinets and open shelving they combine with integrated full height pocket and pivoting doors to seal off areas when required but appear as temporary and mutable so the sense of open flexible space is retained. Bathrooms and kitchens are similarly conceived as either walk-in cabinets or storage walls.

SKUOMORPHISM
To ensure the ‘restoration’ isn’t an attempt to perfectly mimic the past nor part of an incremental development and representation of the neoclassical language, but a critique of that process and the nature of memory the choice of construction and fabrication processes was key. The external wall construction is a 1:1 hollow cast of the existing building formed with an in-situ cast terracotta wall half a meter thick which performs as load bearing structure, external and internal finishes and thermal performance. Whilst this presented a complex and technical construction challenge, the process itself brought opportunities to explore and enhance the notion of representation of past traditions. The monolithic nature of the material and construction methodology being conscious simulacrum of standalone elements and component assembled to make the whole, namely pilasters, capitals, pediments, cornices etc.

CONSTRUCTION PROCESS
A computer model of the ‘existing’ building was built through the study of historical site photographs and a three-dimensional point cloud laser survey of the site and the intact mirrored southern ‘pavilion’ on Waterloo Terrace. External mouldings, fagade features and cornice details were interpreted, modelled and accurately composed against the survey model of the adjoining ornamental fagade. Over 300 panels were created, totalling 450sqm of formwork, which were robotically routed into expanded polystyrene before being assembled on site and the mix poured within.
Over 300 polystyrene formwork panels were assembled on site in 1,2m high horizontal bands, effectively creating a negative mould of the ‘existing’ building, as illustrated in the image of the north and east elevation formwork. Assembled in 1.2m high bands, the construction proceeded with day pours of the same height, with a continuous pour of buildings perimeter in one pour, including internal and external leafs. Once cured, the formwork was delicately removed by hand and by soda- blasted to remove the polystyrene formwork and gently texture the facade.
While this structural shell can stand independently as a large hollow cast form, the internal floor plates are Cross Laminated Timber (CLT). Notches and pad stones were cut into the existing brick party walls to take the CLT tooth’s which were then laser surveyed to allow the offsite CLT manufacturing to precisely fit into the party wall notches. Once delivered to site, the CLT was assembled in a period of 8 days.

DIGITAL INACCURACIES
The digital fabrication process, whilst critical in the production of accurate construction information, introduces traces and imperfections of the manufacturing process. The cast fagade bears the mark of the tooling head which traced against the formwork geometry, which can be seen on closer inspection of the fagade. Understanding that on occasion, the translation of the CAD information into the manufacturing equipment could resulted in lost and distorted details, areas likely to ‘fail’ were encouraged to do so. Sometimes, over simplifying details or even skewing, or losing them altogether. This digital manufacturing process having as many opportunities for ‘failure’ as the physically manhandling of formwork and pouring the monolithic mix, reinforced the notion of misremembrance intrinsic to the buildings construction and our understanding of the past. It needs scrutiny.
_

One thought on “Groupwork + Amin Taha”