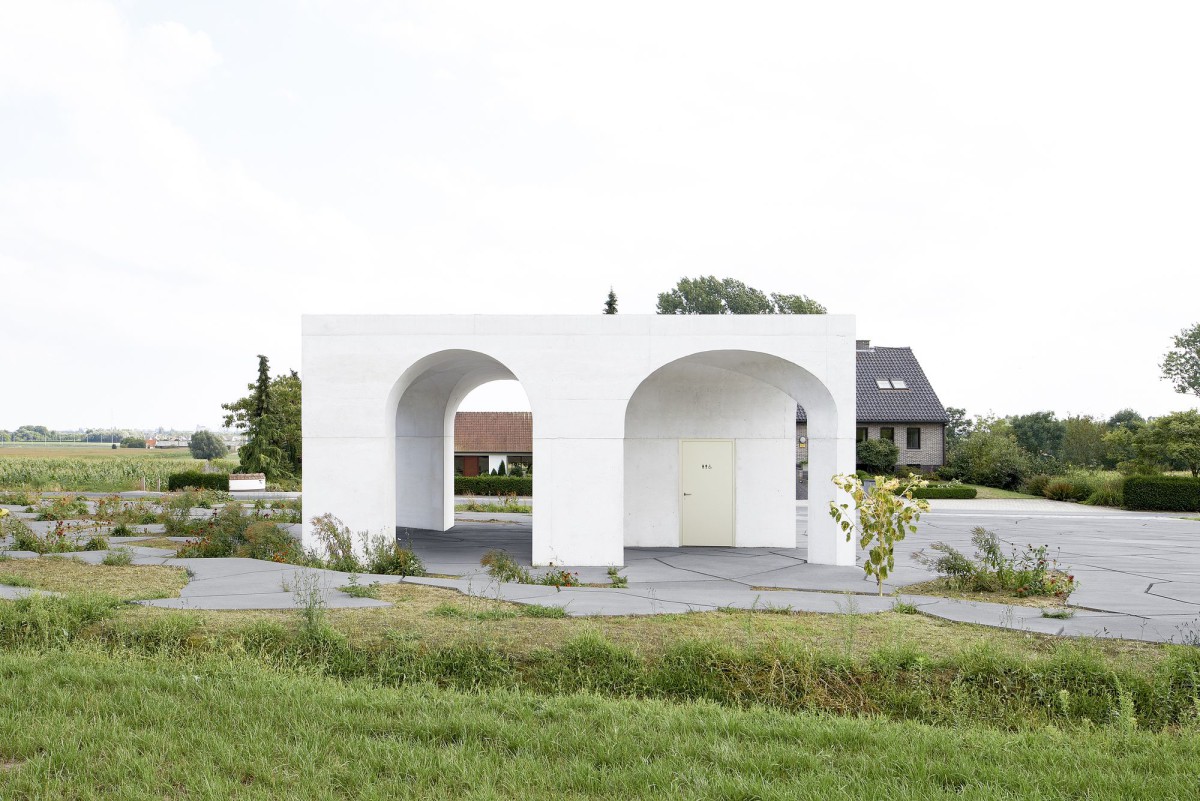 In the frame of the centennial commemoration of World War I, the architect duo Gijs Van Vaerenbergh was commissioned by the municipality of Hooglede (BE) to realize a reception pavilion for the German Military Cemetery. More than eight thousand German soldiers who fell in the region during the Great War are buried at the German Military Cemetery. The cemetery dates from 1917 when the area was in still German hands. Today, the cemetery is located in a typical Flemish suburban context, surrounded by agricultural lands and traditional allotments.

The concrete pavilion functions as a reception infrastructure that – depending on the viewing direction – frames different fragments of the environment. The pavilion is inspired by classical arch architecture, which can also be seen in the historic Honor Hall of the cemetery but also presents a new interpretation of this historical architectural vernacular. Gijs Van Vaerenbergh cut six diagonal vaults at different angles out of a massive volume of 9x9x5m. A complex vault and columns structure of varying shapes and dimensions define the covered space. An over-dimensioned column accommodates a subtly integrated lavatory space.

Each vaulted space frames another fragment of the surroundings: the cemetery, the surrounding landscape and the allotments on the other side. Yet, depending on the viewing direction – the pavilion also frames fragments of itself. This creates a pictorial play of arc in the arc that brings to the fore the way the play of light affects the vaults. As such, the pavilion functions as a kind of viewing machine that brings both itself and the environment to the fore. The floor around the pavilion was conceived as a spatial installation that reflects the wish to make the entrance zone a space that functions as an important addition to the overall staging of the cemetery.

A dark concrete surface was divided by a fracture pattern, which refers to the broken and blackened landscape at the time of the war. Various concrete fragments were removed at strategic locations to make space for greenery and planting. The landscape design was realized in collaboration with LAMA landscape architects. With Six Vault Pavilion, Gijs Van Vaerenbergh continues their work on themes the duo experimented with earlier in other installations. The ‘cutting’ is an important strategy in their thinking and design process, yet in this work, it is applied in a completely novel way.
_