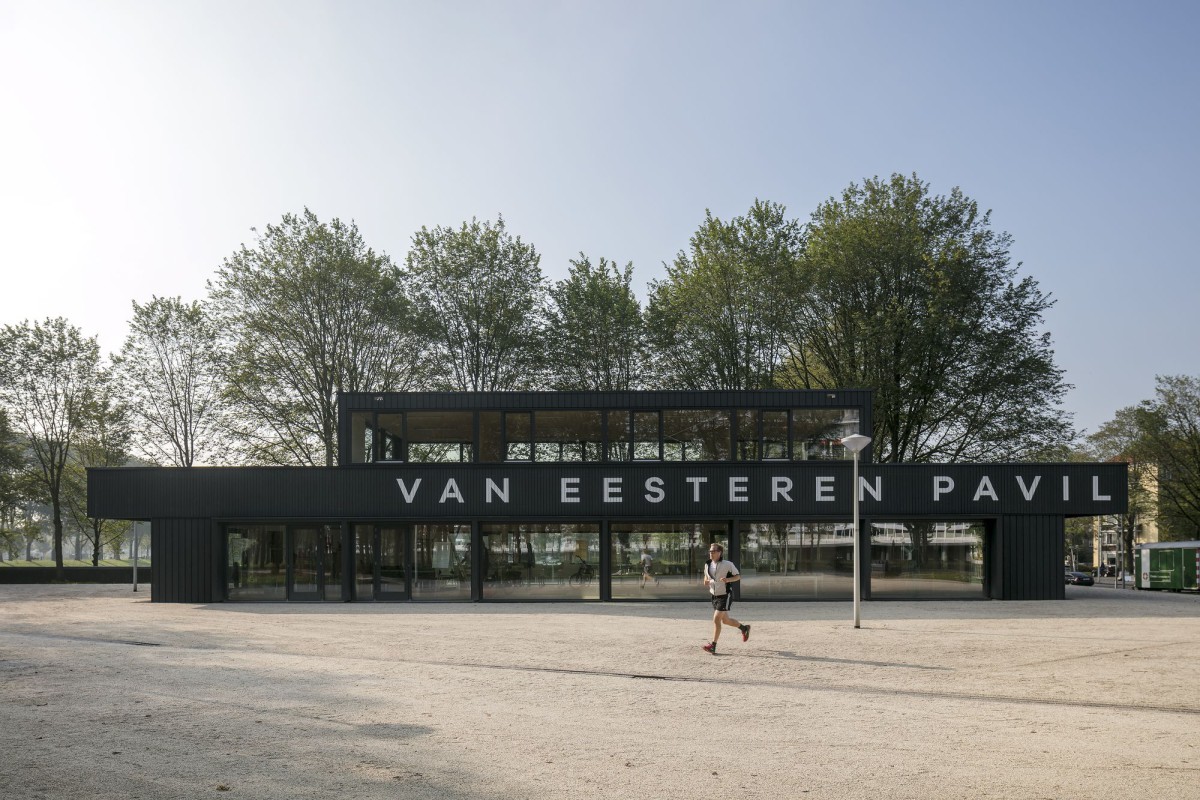 The new pavilion for the Van Eesteren Museum is situated on a triangular plot on the north bank of the Sloterplas. On this particular site, architect and urban planner Cornelis Van Eesteren himself envisioned a small building, which he included in his urban plan. In the last 50 years the plot was covered with hawthorn bushes and its possibilities remained almost unnoticed.
_

light, air and space at the Sloterplas

The northern bank still breathes the grandeur of the heroic period in which the Sloterplas was constructed. Located at the western edge of the promenade, the building site forms a pivot point between the vast eastern side of the north bank and the smaller scale of the western side with the marina and recent developments.

Over time the geometric, pure architectural and monumental layout of the north bank has transformed into a lush green park with high trees and a surprisingly natural character. The design of the new building is therefore tailored to a park landscape rather than the urban composition we see on historic photographs.

The materials, shapes and colours chosen for the pavilion match the natural character of the place. The formal language, however, is indebted to the modernism of the time when Sloterplas arose. With a deliberately chosen combination of modern simplicity, clear lines, lots of light, bright, graphic colours and natural materials, the design refers to Scandinavian pavilions and houses from the 1950s and 1960s. This architecture fits both the original design and ideas of Van Eesteren and the present time.

Atmosphere, acoustics and spatiality are defined by wood as the most important material, as well as daylight. The outdoor walls are as transparent as possible. The closed parts are executed in dark stained or painted wood. The lower part is covered with wide planks with a fairly heavy profile. In the area above we have used more narrow planks and added decorative letters.

With our design we tried to take the cultural objectives of the Van Eesteren Museum into account while dealing with the (very) limited budget and the desired sober appearance. All visible parts of the building have a clear practical function. Purely aesthetic elements are omitted. The structural design is legible and logical. The detailing, with its oversized window frames, protects the used timber, helps to keep the glass clean and reinforces the transparent impression of the building.
_