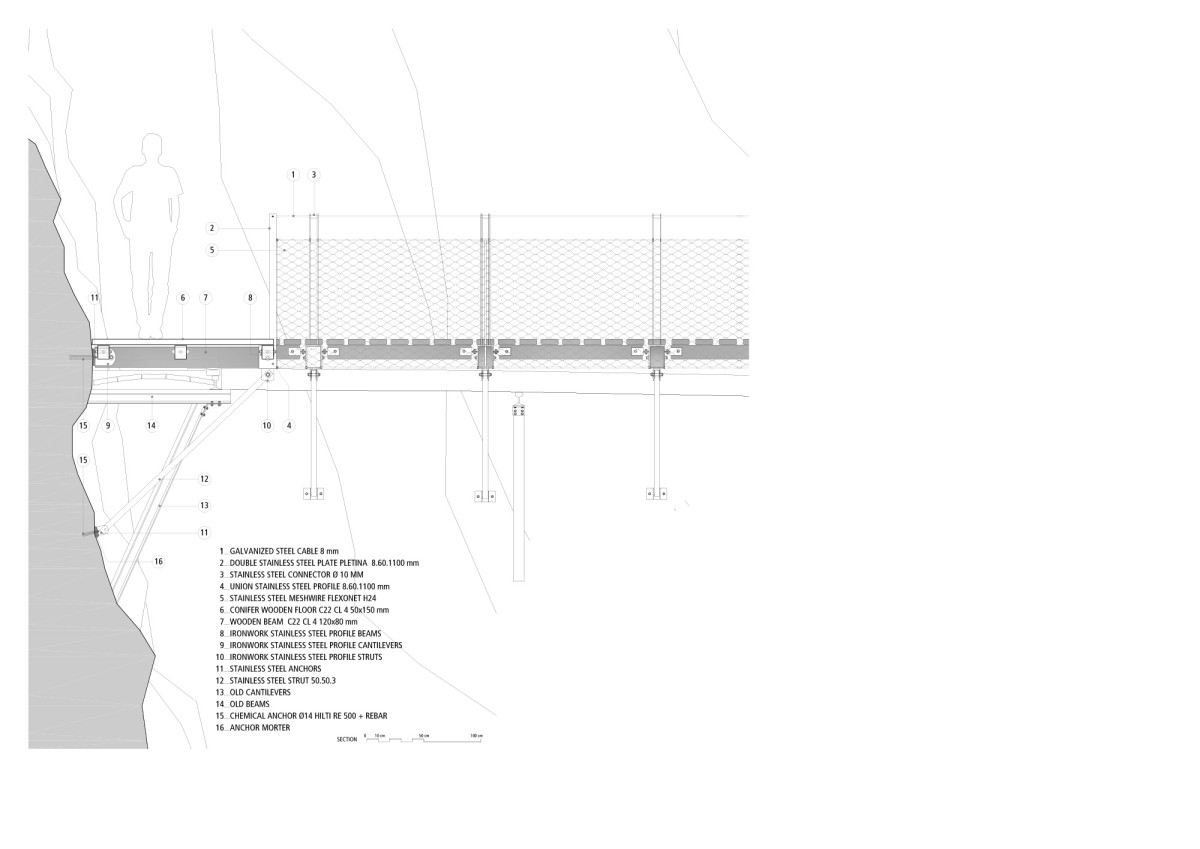 These parts of hanging boardwalks were originally built metal bracket supporting wood planks. The basic structure of the former boardwalks consisted of metal girders, iron train rails, which were embedded in the rock. The girders serve as corbels that hold for a metal support. Moreover, the joint was reinforced by plenty of wires. One or two metal rails used to stand on this whole structure as side girders, which supported a hollow brick arch bonded all together with lime mortar.
_

WHAT IS LITTLE THE PATH KING´S? It is located in the centre of the province of Malaga, between the municipalities of Ardales, Álora and Antequera.
The trail was built in the 20S the last century to give workers access from the Conde de Guadalhorce dam to the hydro-electric plant at El Chorro. Thus the workers and their families living in the El Chorro settlement avoid the long way around the mountains. El Caminito del Rey was of great help to all of them. Children could go to school close by, women bought essential products, and it was possible for everybody to keep in touch with other villages behind the surrounding mountains.
The path runs along the right bank of the river sometimes attached to the steep face of the El Chorro gorge 105 m over the water by a boardwalk and half way by a wooden walkway.
The total length of the route is 7.7 km, and 2.9 km by long, boardwalks.
So, The Main goals of the project
1 Maintain the current landscape by not damaging the environment, because it is a monument, it is natural heritage , for example the Gaitanes gorge is a karst formation which is shaped like a great basilica.
2 Keep the memory of the old trail as archaeological   industry.
3 Could not forget the human impact on the surrounding area when the path will be opened. We studied with a territorial planning to determine infrastructure and facility requirements in the area of influence of Little path Today we have a 300.000 visitors every year.
4 Solve the complexity of the project with a moderate budget and complete it with an easy design.

This project has been a challenge, The path was dubbed as one of the world scariest hikes, closed 20 years ago.

For over 2 decades, only high risk adventures dared to return. but it is sad glory for those who died there.

The place is a rich archaeological settlement, a wild life area, of botanic, geological and anthropological interest At the halfway point of the route, the space was cleaned and a small pond was created in order to protect the habitat of the ‘pintojo’ toad, (spa).

The Hoyo Valley is a coniferous forest of carob trees and scrubland. The path continues to decline very subtly. This is a path that has been preserved in its natural state, and reinforced with quicklime mixed with natural soil.

Best of all it is a beauty spot, strong and fragile at the same time. So solutions had to be found with humility, as it is impossible compete with the landscape. with this location.

Them I sought to solve the complexity of the project with an appearance of always being there and be part of it is integrity.

I decided to keep the memory of the old trail and to conserve it by keeping everything as it was of archaeological value. Nowadays it is impossible to completely refurbish it because it does not comply with current regulations.

The decision to maintain the old trail, allowed us to appreciate how it was built it, the human resources materials and management of labour hundred years ago: sailors or fishermen were the only ones who knew how to work from hanging ropes, using hammers, chisel, the railway, lime mortar, breaks and horses to transport materials. These parts of hanging boardwalks were originally built metal bracket supporting wood planks. The basic structure of the former boardwalks consisted of metal girders, iron train rails, which were embedded in the rock. The girders serve as corbels that hold for a metal support. Moreover, the joint was reinforced by plenty of wires. One or two metal rails used to stand on this whole structure as side girders, which supported a hollow brick arch bonded all together with lime mortar.

The idea was always there, but the difference is that I had labourers specialists in vertical jobs, like climbers and the management today are drills, adhesives resins and air lift, that is cheaper than horses and operate more safely in these conditions.

One difficulty in building compelled us to design small pieces that can be carried in backpacks by mountaineers (the specialists in vertical jobs). Big supplies to very specific points, or waste management was done by helicopters. With a great precision.

In other hand an important condition was the biological stop.

The new path is a set of articulated pieces that lie on a slope, and are altered at the whim of nature.

As for the boardwalks, it was said that they should suppose the smallest impact on the surroundings and that the system should be highly affordable
The materials include stainless steel for mess, anchors, kneecaps, jabalcon and braces also wood for the beams and floor. The meshes are attached and taught by means of steel cables on two parallel plates, which are anchored by clamps and screws to the bracket. Both plates are separated with a narrow tube12mm in diameter, wherein the stainless wire is used as a line.
The wooden planking that the boardwalks are made of is cut at the junction with the bottom of the plates.
We left there the via ferrate because is necessary for maintenance works.
The layout is an organic body, really a meccano that has been adapted to the escarpment walls like a centipede walking along the walls in the gorges and jump to front walls in a unique place there.

There is the old Aqueduct bridge.
It was built in 1904 according to the project of the engineer Eugenio Ribera.
The Bridge is in the memory of those who lived there and the visitors to Los Gaitanes, but although it does not seem to be unstable, the concrete is carbonated and framework so rusted. Therefore, its possible rehabilitation would be a good idea, but there are two major drawbacks:

1.- Really would be necessary to break down and rebuild but it is very difficult to avoid the environmental contamination.

2.- The high cost of ’the new bridge’ would far exceed the investment of refurbishment of the entire Caminito del Rey.

Then I designed a light Bridge. It contains two overhead catenaries cables on which suspension cables are hung and then tied to the ground. The floor of the bridge is designed to be made of TRAMEX, it let. look down into the gorge, to the bottom.

When the people cross over it, if you see them at a distance of 50 meter. It looks like they are flouting. The bridge disappear of view.
One of the difficulties that had to be solved was the access to Álora at the junction of the railway and the boardwalk.
The solution was to built and extend it over the tunnel. There, a cage made of flexible mesh and stair into it.
It is important to say that the old trail died when it became useless, it was obsolete to the people living in the area,
Now recovered for tourists, many visitors coming from all over the world to enjoy a wonderful landscape, to feel the emotion of walking Into the greats gorges, 105m high on the escapement walls and also sometimes within the wood.
The design solution of each piece is useful, not to have anything left has a purpose, no useless ornaments. Nothing is superfluous.
Moreover, the planing. not only serves to enable El Caminito del Rey, includes the drafts of the visitors reception centre and parking areas. The works are in progress.
The King`s Litlle Path opened two years ago, every day it has new jobs in progress. The concessionary company ought to invest a little part of benefit in the area, so many improvements there are doing, free for the municipalities administration.
We have designed a new alternative solution that go into an old tunel canal, this way has to open windows that let show the most special places of the Gaitanes Gorge.
The new way let change the route the raining days and windy and so avoid fatal accidents because the rocks fall from the top of walls over the path
The opening of El Caminito del Rey should bring significant improvement and economic growth to the area.

Main advantages of the system that I can summarize:
1. The effect of this building system on the rock is minimum – only two holes in the right support. One in the stringer and another in the brace. This action is reversible.
If the new boardwalk was removed, the environment would remain unchanged.
2. The wooden floor is cut according to the state of the rock at each point, which results in an excellent adaptability, and means that panels are easy to be replaced.
3. The wooden structure blends with the environment. As the material come from nature, it fades to gray and, this way, it merges with surroundings. Whole materials are reciclables.

The final cost under 2.7millon €
The construction time has been 11 month including the time of biological stop.