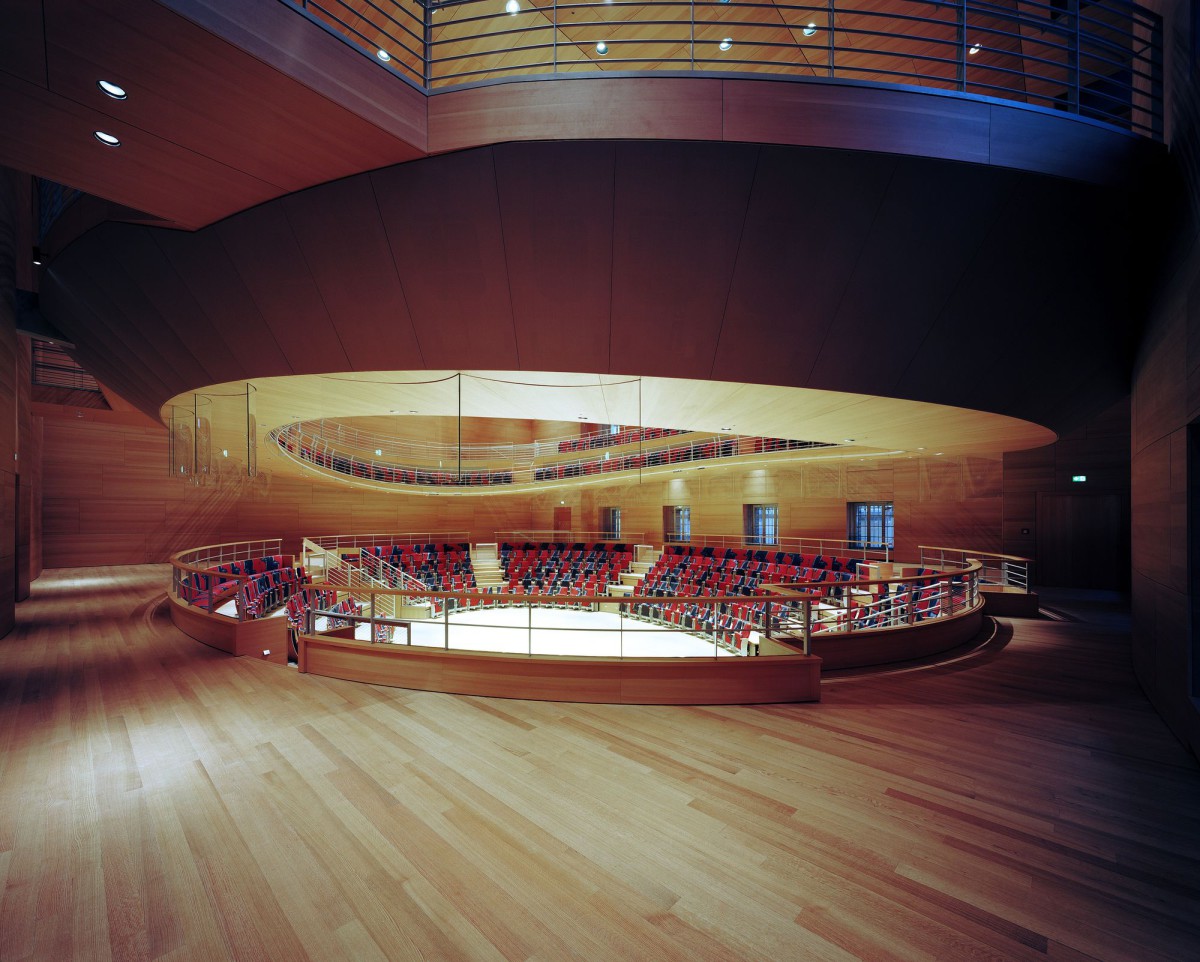 After a four-­‐year building programme that has gone entirely according to plan, Berlin’s new Pierre Boulez Hall will open with a gala concert under the direction of Daniel Barenboim. As honorary guest, German President Joachim Gauck is going to attend the opening concert on 4 March. The newly formed Boulez Ensemble will present works by Boulez, Schubert, Mozart, Jörg Widmann and Alban Berg.

The Pierre Boulez Saal is part of the conversion of the former stage depot of the State Opera Unter den Linden, the Magazin, into the Barenboim-­‐Said Akademie. The wood-­‐clad hall has flexible seating configurations for up to 682 people over two levels that surround the musicians on all sides. The upper level is a set of two oval shaped, column free, sloping balconies, which are rotated slightly against the axis of the oval stage, enhancing the sight lines.

The hall is designed for intimacy, with the maximum distance between the conductor and the farthest seat being about 14 meters. The hall readily accommodates performances by soloists, chamber music ensembles and medium-­‐sized orchestras.

To achieve immediacy between audience and musicians, the seating is divided into retractable and fixed sections. This flexibility allows the audience to be as close as possible to the musicians.

For solo and small ensemble performances the front row seats are placed directly on the stage. By eliminating the traditional stage edge between musicians and audience, the boundary between performers and listeners is dissolved. For improved sightlines, the seat rows further back are on tiered telescopic seating platforms. The uppermost tier is a row of built-­‐in bench seating, the only fixed seating on the entry level. The balcony seats are also fixed, but leave open areas for off-­‐stage musicians.

To provide the required acoustical volume for the hall, the floor slabs and shear walls of the existing Magazin building were removed and only the façade and roof maintained. On the east and south sides, four bays of three windows each connect the hall visually to the surrounding neighborhood and make the space

feel like a room in the city. Because of this, the interior of the hall reflects the ever-­‐changing Berlin sky.

On the west side, another four bays of three openings connect to the four story atrium of the music academy. On the ground floor and first floor, these openings have been converted into sound and light locks, and on the second floor they provide a visual connection between the atrium and the hall.

The balcony is designed like a bridge and tied back into two new concrete shear walls concealed in the north and south façades. The balcony structure is a concrete truss with a trapezoid cross section, with an openness factor of over 35% for acoustics. Like a speaker, the open face of the structure is clad with acoustically transparent material that lets the sound pass through and reflect off the main walls of the room.

The walls and the ceiling are made of vertical grain douglas fir panels. The surfaces requiring air permeability are either left open or clad with speaker fabric. The railings are made of painted steel. The seats and the seat fabric are both custom designed by Gehry Partners, LLP.

The wall and ceiling surfaces are slightly undulated in response to the acoustics, and the windows are built out of three layers of glass to achieve sound separation to the street.
_