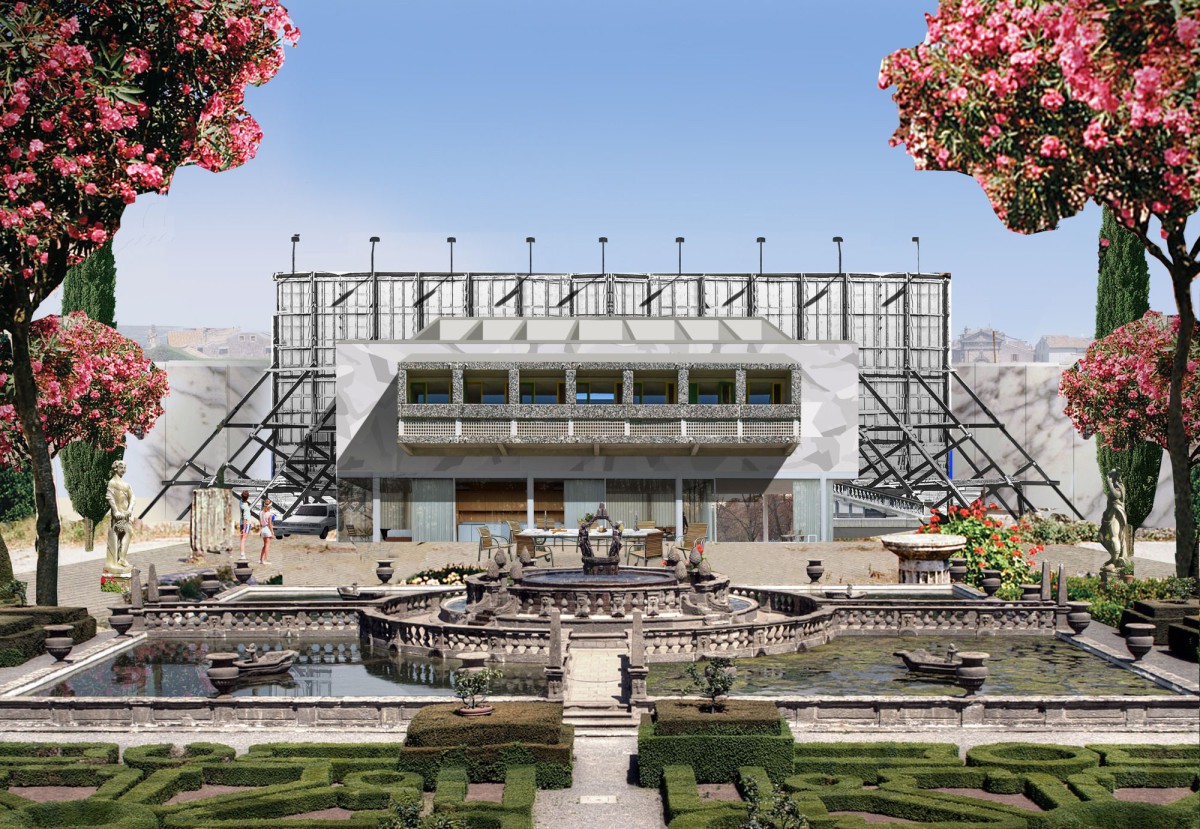 Re-Constructivist Architecture at Ierimonti Gallery New York, curated by Jacopo Costanzo and Giovanni Cozzani and promoted by the Scientific Technical Committee of Casa dell’Architettura in collaboration with Consulta Giovani Architetti Roma, presents the work of thirteen international emerging architecture firms, aiming to portrait a generation of architects born in the ‘80s: a countertrend that tries to recover a debate lost years ago and obstructed by a cumbersome star system. Their theoretical, critical and historical approach attempts to rediscover a thoughtful dimension behind the architectural subject. Each firm will present a residential project in the Roman countryside, a design exercise meant as a typological investigation, or, more generally, as a meditation on the autonomy of the architectural discipline. What will remain are thirteen projects for thirteen houses in the Roman countryside, thirteen gifts to the city of Rome. Involving some of the architects who participated to the 1988 MoMA’s show “Deconstructivist Architecture” through their drawings and short essays, the exhibition is attempting to generate a debate between two generation of architects: one who destabilized a certain kind of relationship with the design theory and a new one wishful to get back on the lost way.
_

Roman Villa Roman Villa proposes a house that is reduced to a billboard and sleeping cells; the billboard constructs the desired image towards the context, a front independent from anything else. The cells provide a minimum necessary privacy. The luxury is given to the common spaces and garden; an ambiguous duality occurs between the humble private spaces and the extravagant garden. The proposal is an extreme version of the Italian roman villa typology where the landscape was included as a fundamental element in the formal plan of the architectural composition. This often reached a degree where the architectural configuration of the house itself was seemingly secondary compared to the presence of the garden. The proposal is an interpretation of the Petralona House as a roman villa. In this house the design accentuates the value of a small garden in the center of a dense metropolis.

·
Warehouse of Architecture and Research

A dwelling of noble and latin sense The project simulate a colonization of a ruin in the Roman countryside. The ruin is a Roman character, paradigm of the city development. The ruin is an unavoidable element, always contemporary. This ruin, heritage of a circular based building, get animated by a cultured and sophisticated colonist, aware of Architecture Arts. This ruin is an ironical work of sieve inside contemporary architectural vocabulary, declined in a latin manner. Alongside with practical elements, of convenient utility – by now unquestionable – the house hosts comfortable elements for a way of living full of that sensibility, knowledge and affections that dignify the the human spirit, rooting it to its highest and more natural virtues.

A locus amoenus is a place where the human being finds the wild part of himself as an individual, he finds himself in an absolute private dimension, where he knows how to be free and emotional. It represents a vision that explains a clear need for relief from rigid social rules and an escape from the universally recognized and accepted conventions. Nowadays it’s difficult to talk about the locus amoenus; today the single individual has a new representation of himself which is fragmentary, dynamic, never totally complete in a single social environment. As a consequence, the locus amoenus is demystified, reinterpreted in new forms, and fragmented into many loci. It’s becoming one of the many environments that the different social representations of our “Id” has to face, wish or fear. The roman countryside, as locus amoenus, is the mental and natural environment of our project. Settled in the hilly landscape, the general layout of the house is divided in two parts, an internal one and an external one, with two very different characters. Its main internal space is identified by the most representative moment of domestic life, the kitchen; it’s a unique and contained space, occupying just a small percentage of the whole building. The space is a triangular niche between the roof’s inclination and two walls, with an opened side towards the landscape. The generative fulcrum of the niche is the fireplace, which is not just an object in the room, but the origin point of the space itself. The triangular geometry creates two opposite perspectives and feelings. A spatial introjection towards a fulcrum and a pressure-like feeling towards the outside, emphasizing the coexistence of two contradictory characters in the same space. The bedroom represents an exception, it is the most intimate and private space of the project, hidden between the lowest peak of the roof and the highest point of the topography. It’s not visible from outside and is the most remote object in the whole structure. The absence of a direct and clear communication with the outside underlines the sense of isolation and protection of this room; the skylight is not an accessible courtyard, but rather a funnel that channels the light from the roof down to the room. The external part under the roof is an undefinable space, it’s an outside kitchen or living room, it’s a shelter, it’s a piazza, it’s a ruin, it’s a fragment, is the informal face of an house in the countryside. The roof is the only element that gives a unifying character to the house. it’s a clear division, whose physical expression reaches an extreme level to the point where the passage from one side to the other is not possible. The only element connecting the two sides is the corridor. The structure in the same manner reacts differently according to the spaces it serves. Two T-form cables on top, together with the exterior ramp working as a cable as well, held the roof on one side, allowing unconstrained spaces under it. On the other side the freedom and the informality of the open space is expressed by an opportunistic and in the same time functional pillars-beams structure, that doesn’t want to create a clear hierarchy or an identifiable order. The house is intentionally not conventionally “comfortable”, its elements would make you feel constantly alert and aware; which is the most consistent way to experience nature.

The actual site of the countryside as mythical place, as locus amoenus, is the periphery. This anthropized arcadia was turned into fragmented spaces and partial representations, as contemporary production of space is free from urban tasks, poor in urban ideology, a sprawl of individual residential and meta-commercial settlements. We focused our Urban Villa on the ambiguous reality of Commercity, connected and detached from the city itself and a global desire, between Rome and Fiumicino airport. Taking the scale-less of the anonymous logistic hall architecture as a starting point to confront the deficient privacy with an idea of communality, to turn the scale-less size into domestic generosity, and to create an incentive juxtaposition of nature and architecture and of dream and reality.