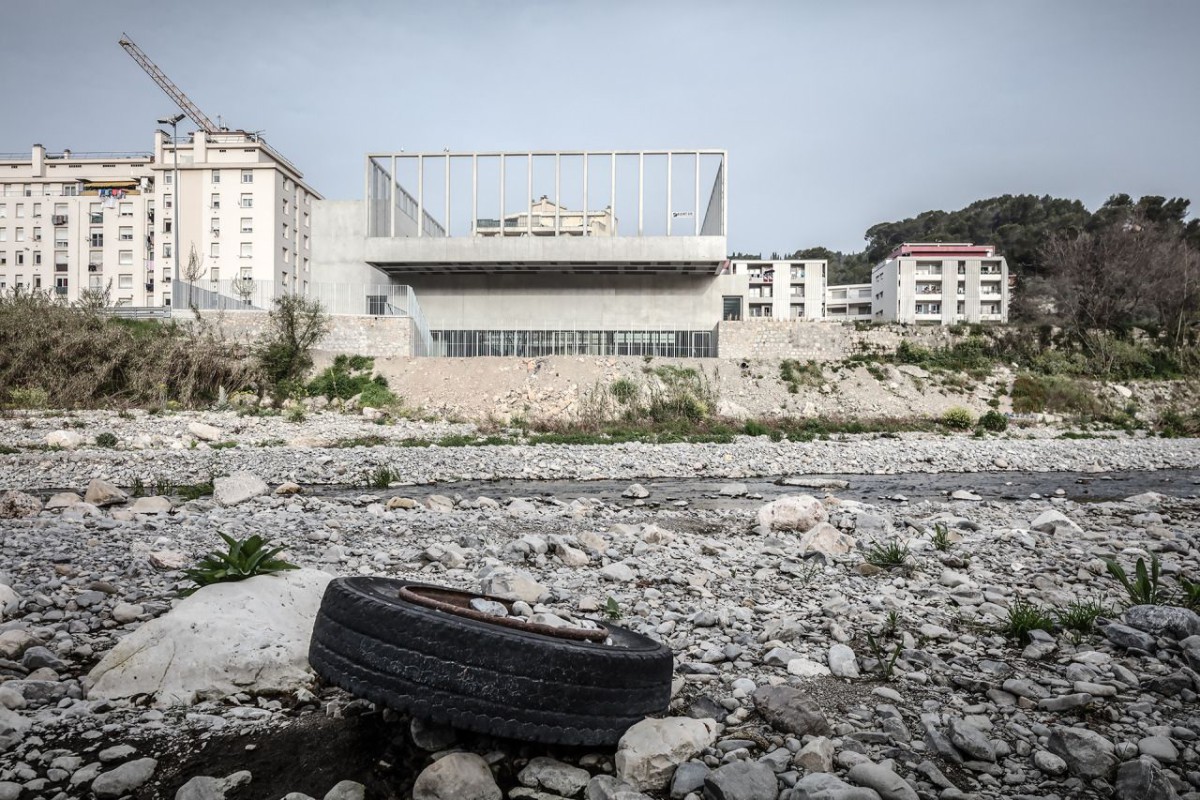 The project is located at the tip of Nice, to the north. We won the competition by proposing to top off the futsal programme with a multi-sport pitch on the roof. We wanted to create a transversal link between the city and the river. This little concrete temple of sport places the young players into a dialogue with their land and sky.
_

This edifice conveys both the notion of embedding in the ground and of rising in the landscape. We worked on a sectional basis and created a sunken part of the structure, buried as low as possible, alongside the river. This facility is entered via the mezzanine, at street level, on its Western side, with the whole hall discovered below. The river’s meanders can be seen from the pitch. The sports ground receives natural light from the street side, river side and zenithally through a glass roof to the north. The edifice springs from the ground, and from the alluvial deposits of the river. The rough concrete, which slips from the outside in, is the single material that extends throughout the project, including the bleachers and benches. Silent outside and hidden inside, it creates the tectonics of this facility built in a reputedly difficult neighbourhood. A concrete peristyle on the roof defines and covers the outdoor space, in dialogue with the surrounding hills.

Once we’ve followed the banks of the river and passed the incineration plant, we arrive at l’Ariane. This neighbourhood, result of 1960s town planning, is currently undergoing a process of urban renewal. Yet there are still streets and squares here crying out to be revived. On the other side of the river, an express road, the railway and an industrial zone make up the gymnasium’s neighbouring landscape.
The competition programme was allowing for the futsal to be transformed into a large sports hall in the course of the studies. We worked with this ambiguity by proposing to create a multi-sport pitch on the roof, thus avoiding any calls to modify the programme and set-up.
The project is semi-buried, with an east-west orientation. The ancillary programmes (small associative offices created in lacquered wood) or service spaces (changing rooms, toilets, ventilation facility) fit in with the structural and spatial logic of this “raumplan”.
The forecourt is protected by the overhang of the large sportsground forming the roof. The public space of the forecourt naturally extends towards the gymnasium and bleachers. The sportshall below opens onto the natural space of the river.

On the roof, a concrete peristyle defines the outdoor pitch, in conversation with the surrounding hills.
The concrete, which comes from the nearby plant, has been cast on-site to embrace the strong summer sun and low winter rays. Smooth outside and hatched inside, it forms the required dramaturgy for this facility now standing in the neighbourhood. The prestressed beams are set close together on free-standing supports.
Born of the soil and the silt carried down from the mountain, this substance is derived from the grit of the Paillon, its genetic fingerprint inseparable from the riverbed. Strong and thick, with its insulating double concrete walls, both mass and skeleton, it whispers its oxymoron: I am rough and gentle at the same time.
To avoid backlighting for spectators, a canopy casts the light scattered by the grid of posts onto a northern gallery. Through the glass façades, street and river side, that naturally ventilate the volume of the hall, we see the players participating in neighbourhood life, in the new intensity of this place that was just waiting for something.
_