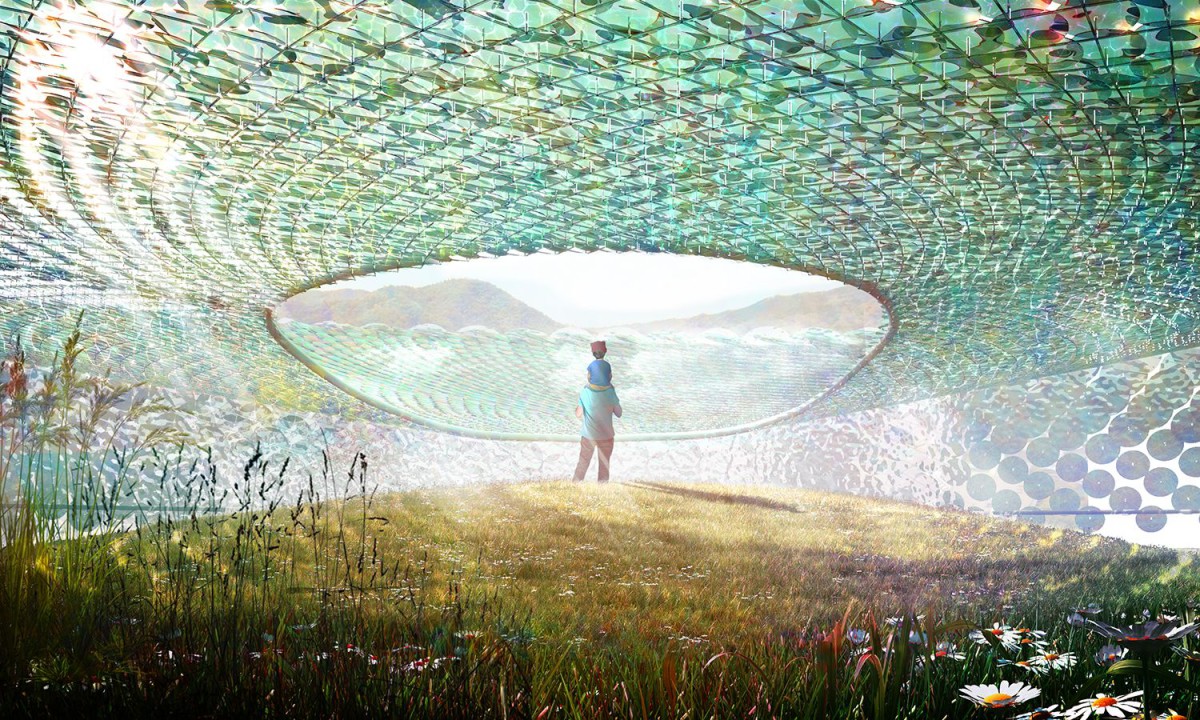 The main idea of the project is the representation of the old city. Simulating the structure of the walled city of Suncheon, the proposal aims to apply in a new way the primary elements of it which are: the fortification, the four gates, the main arteries and the natural environment.
_

The overall intervention combines these major elements underneath a protection round shaped veil. The shape derives from the original curved shape of the old city in a simple way and is adapted to the specific site.

Additionally through the uniqueness of its shape, it arises as a point of reference along the entire region, a design that will invigorate city’s overall impressions. It is not aimed to create an iconic building but to propose a sort of fragments that can grow and be adjusted in future changes and needs.

The idea of the city fortification is translated into this big veil that protects the entire complex and generates a continuous limit around it. The roof covers both site A and B serving as a merging factor that exceeds the road barrier – site C and contributes to a consolidated result.

The Suncheon Art Platform is designed to seamlessly connect to the urban fabric. The proposal sets out to capture the city’s traditional building density by creating human scale interior and exterior urban spaces. The various volumes are positioned to create a central open space and smaller spaces around.

The four gates, including the new gate of Yeonja-Ru are located in the four sides of the plot, related to the major streets. The Yeonja-Ru comes to be the south gate of the art complex and is associated with the other side of the river. The east gate comes as a continuation of the Fashion street and the market street.
Keeping the existing urban paths that follow the external streets, the Suncheon Art Platform develops into a zone of continuous flows or as a confluence of flows, a meeting cluster.

Our proposal focuses on the creation of a new topography in the heart of the city of Suncheon. A bowl is built in order to collect the rain water recovering a sustainable environmental system for the area. The topography leads the visitor through a softly transition from the exterior, through the inner world till the top of the hill connecting him with the nature.
We use the soil removed from the site for molding the slopes in the boundaries, in order to protect from the undesired urban landscape and reinforce the visitors’ flow to the heart.

Our site is located in an area rich in archaeological background and this is the reason why we aim to create a space which will be anytime transformed to welcome any archaeological excavation.

The project will develop itself along time, being flexible and adaptable to future changes. Having into account the presence of an archaeology subterranean layer, the way that constructions rest on the earth is minimum and subtle (campsite).
An Open Museum is proposed in the location of the wall trails parallel to the road crossing our site. The Wall Museum can be visible from the slope over the parking place.

The traditional nature of the proposal derives from the variety of sensations that the place activates. The origin of this aspect comes from the traditional Korean gardens and the strong relation between nature and human.

The evolving skin sieves the light creating an inner world of sensations, while the outside surface offers reflection effects of the natural environment. The roof also protects from the solar radiation.

The vegetation is designed using traditional species of Korea, in order to highlight the passage of time, the transformation through the seasons – presence and absence of water, as well as to alert all the senses.

Our proposal intends to reveal the beauty of nature that encloses the site and eliminate the views to the city. Wandering underneath this membrane, flooded with reflections, the gaze focuses on the brightest hill spot in the middle. Approaching it, following the topography, the light is getting more and more intense, where in the end, reaching the top of the hill the entire surrounding nature is revealed. This is achieved by controlling the height of the structure in every side, in a way that hides the city and provides a view only to the mountains.
_