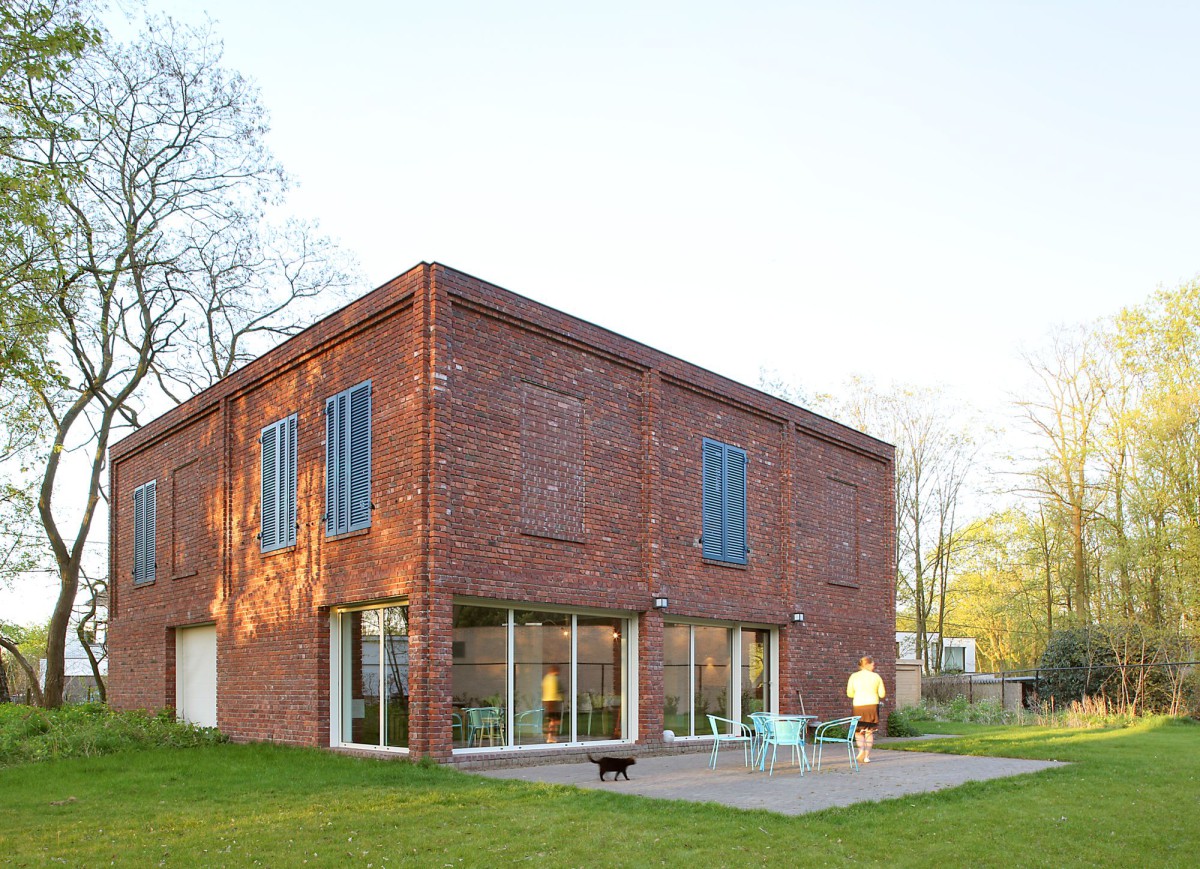 Flanders is for the most part characterised by a hybrid settlement type somewhere in between a rural and urban organisation of space, the so called ‘sprawl’. One of the main properties of this Flemish spatial environment is the completely artificial landscape, which originated from a micromaze of rural lots and farms which formed Flanders from the early Middle Ages on. The territory was largely occupied in a very early stage already, and it was occupied by single standing farms surrounded by small fields (appr. 1 hectare) on which the farmers sowed and harvested. The Flemish landscape is a landscape of gardens.
_

It’s a small step from a landscape of gardens towards the sprawl we live in today. When every inch of the territory is occupied by numerous built spots, only doubling or tripling every spot in size would change the landscape drastically. This is what happened in the last decades or even centuries, and the built mass didn’t simply double but grew tenfold, and even more. The nuclei grew until they touched each other, and the different micro-­‐ cores melted together to a curious new alloy we know as the Flemish landscape of today.

Flanders was not the only region with an early rural landscape of gardens. The northern half of Italy, from Tuscany over Emilia Romagna up to Piemonte and Lombardia, had a similar history which even goes back to the Roman Age. So do the Midlands in England, and in fact most of the densely populated European regions of today. But Flanders is a case on its own, as it still celebrates the freestanding house with the garden regardless of the fact that most of the building lots have been used. Building lots become smaller and smaller, from an average size of 1.000 m2 in the nineties towards the 400 m2 of today. At this very moment lots of 250 m2 and even less are sold to build freestanding houses, with a green border of an almost absurd size which pretends to be a garden.
Moreover the house itself still pretends to be a farm, the single-­‐stored typology with sloped tile roof deriving from it not coincidentally indicated by the name fermette.

This blind focus on rural housing in the reality of an urban evironment still characterizes the actual Flemish housing production. This is also what’s at stake in the design of Villa Zeegers-­‐Dumon in Heusden, a little suburbs of Ghent. In the design of the villa we were inspired by the only urban freestanding houses we know, namely the Italian palazzi of the Renaissance strongholds. These palazzi originated within the strong logics of defense and self-­‐sustainment, which were imposed by the relentless attempts and feuds which typified these troubled years of the trecento and quattrocento. Therefore the typology was a free standing one, with a high and strong base (elaborated in rusticato) with small windows and iron grilles, a piano nobile on safe height with shutters for the windows, and a courtyard to foresee in an interior facade and a water well. The Venetian version of this palazzo had its pleasant lounge at the centre of the typology instead of a courtyard, probably because of the more stable political climate at the north of the peninsula.

Of course Flanders is not subject to a hostile political climate or plain anarchy. But the Flemish house of the last decades tends to refocus on itself, more then its colleagues from the neighbouring countries do. Front facades are concipiated as blind walls, only animated by the front door or the garage gate. The fence, the hedge and the front yard

are other elements in this defensive sequense, elements which seem rather awkward in the idyll of a rural environment. As the house locks itself up, it denies any relation with the surrounding landscape which after all was the reason one would come and live there at the first place. This is the paradox of the Flemish sprawl, in which an almost urban density is tackled by a rural typology, while the typology on its turn struggles with the urban context it has to deal with.

The Villa Zeegers-­‐Dumon and its surrounding garden are designed in full awareness of this paradox. The garden isn’t fenced, and the square volume turns with the curve in the street, seemingly unaware of the borders of the building lot, which are parallel to these of the neigbouring plots. In this way the house seeks full contact with the landscape, without any bargaining or mediation. As a consequence it has to confront the public space of the street as well as that of the garden, with the Swedish Allemansrätten or the Right of Public Access as a theoretical background for the design of house and garden.
All of a sudden the closed expression of many Flemish modernettes (a contraction of
modern and fermette) can be resumed with much more meaning to it.

The modern palazzo gets its piano nobile and rusticato, with the lower part of the brickwork (made in field stone) worked out in full-­‐stone thickness, but less high then the half-­‐stone upper part which seems to accommodate the living rooms of the family. The composition with a lower basement and a higher topping turns the heavy weight of the brick mass into an elegant construction. The interior of the house however shows another story, as the classic division of the Flemish modernette with day quarters on the groundfloor and night quarters on the first floor is simply taken over as opposed to what the facade composition suggests. The windows of the bedrooms are set from the floor instead of the middle of the wall, putting the visitor on the wrong track at first.

Not only the composition of the facade is a fraud. So is the full-­‐stone brick bond running over full-­‐stone as well as half-­‐stone constructions, confronting today’s brickwork with its constructional degradation to nothing more then plain wallpaper. Another important part of the play is done by the blind windows, a classic theme in nineteenth century urban housing, where real estate taxes were calculated per window, imposing developpers to be thrifty with windows without precluding a future extension of their amounts. The blind window is thus urban by definition, as is the Flemish housing of today. The last story is told by the coloured shutters, which of course serve as sunblinds, but also explicitly refer to the rural typology of the farm. Or was it the Toscan palazzo?