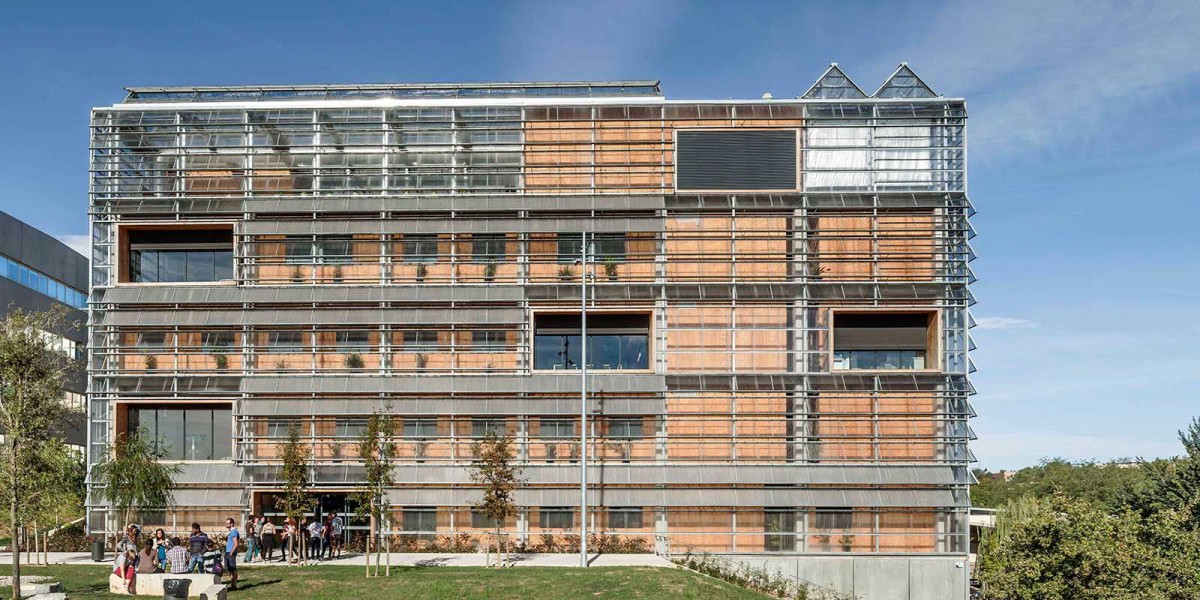 The new building of the Institut de Ciència i Tecnologia Ambientals (ICTA)1 and the Institut Català de Paleontologia (ICP)2, located on the campus of the Universitat Autonoma of Barcelona (UAB) will represent the University two-fold: on the one hand, being part of the facade that shows the University to the highway, and on the other, inside the campus, being an example of sustainable architecture.

The competition bases propounded a compact volume. Assuming this volume, we decided that it will be as tall as the contiguous building and it will be aligned on the back street – the only existing one at the moment- where there will be the entrance to the car park. Moreover, the main entrance will be placed on the south facade (facing the highway) and where the station path (heading south); the path from the campus (on the west) which goes across the building-bridge behind; and a third path coming from the stream street (on the east) meet. On this street, and at a slightly inferior level than the main entrance, an access for bicycles is projected.
The building, nearly cubic, will have a continuous facade on the four sides; it will be semitransparent (with greenhouse technology), with vegetation and some large wooden-framed openings corresponding to the accesses and to the resting spaces for the scientists.
We project a reversible building, totally dismountable and flexible in case of changes in its uses (for the moment, laboratories and offices of both the ICTA-ICP). This is why we have concentrated in creating a truly adaptable infrastructure by means of developing four simultaneous strategies which will complement each other: 1) lasting durability structure, 2) practicable facade 3) interior biospheric containers and 4) yards
Structure We opt for a structural system of great resistance, lasting durability and minimum maintenance with pillars, beams and prefabricated concrete frameworks at sight.
Skin The whole building will be covered with a gallery along its perimeter built with the simple technology from greenhouses, which easily auto-regulates according to the outside environmental conditions. The whole deck, which holds areas of agricultural experimentation, will also be covered with greenhouse structures. Some areas will be covered with polycarbonate or arbours and others will be left totally uncovered in order to act as terraces and resting open-air areas for the scientists.
Interior closings Contrary to the structural strategy, for the interior we propose light modules which will be dismountable, closed, easily climate-controllable, and built with a system of subdivisions made of biospheric materials -mainly wood-, which would provide a great adaptability to future changes of use.
Yards The large central yard has been discarded in favour of four small, covered yards with no interior facades (lower cost), which illuminate the working spaces and make possible, in a simple but efficient way, the regulation of the environmental interior conditions of the whole building.
Programme The building holds two centres of scientific research: the Institut de Ciència i Tecnologia Ambiental (ICTA) and the Institut Català de Paleontologia (ICP). On the ground floor there will be the public zones of the ICTA (rooms, etc); on the first floor its offices; on the second one, the laboratories of both centres; and on the third floor, the ICP offices. On the deck, there will be the greenhouses of agricultural experimentation and the resting open-air zones. The semi-underground will be used as a parking space for cars and bicycles, and the underground as the warehouse for both centres.
1 Institute of Environmental Science and Technology 2 Catalan Institute of Palaeontology