The cultivation of Lausanne’s landscape has produced a number of surprising plateaus through artificial interventions in the steep natural topography. The terrace on which the Halle aux Locomotives sits is one of these special spaces. The project for the new MCBA is a catalyst, opening this extraordinary topographic situation to the city, a set of Terrasses Culturelles.
The southern part of the site will still be used by trains and the dynamics of this traffic modulate the site. Equally, the Place de la Gare is defined by traffic, more a road than a square. In contrast to this flux, we propose to create with the museum and its environment a quiet space, a space of contemplation. 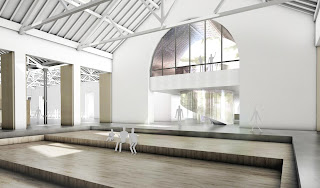 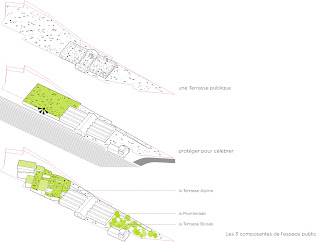 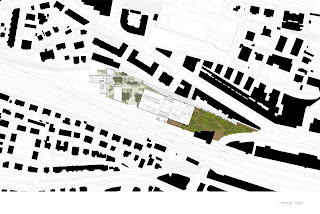 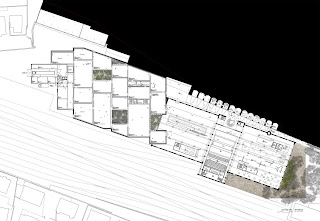 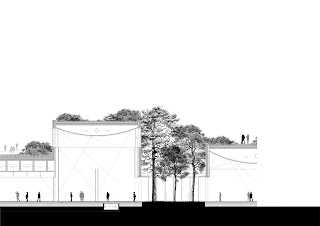 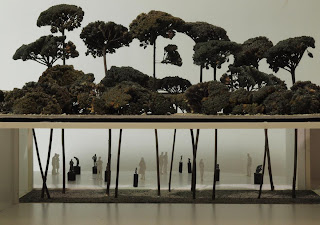 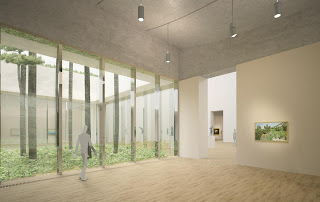 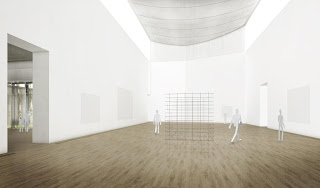 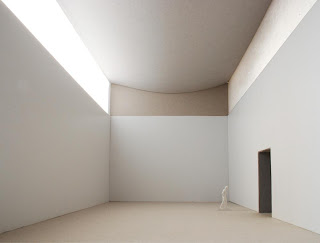 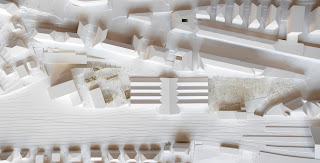 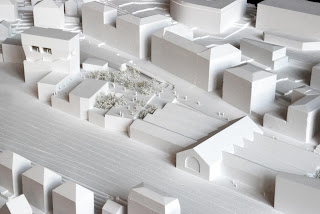 The tension between the urban density and scenic landscape dominates the site and produces the concept of the future MCBA. The complex urban context and the desire to generate a contemplative atmosphere require the creation of two distinct exterior spaces: the Terrasse Boisée and the Terrasses Alpines. A promenade A visit begins in the Terrasse Boisée, a forest thick with vegetation typical of the valleys around Lausanne, a refuge inserted into the dense urban fabric. Through the screen of trees one perceives the grand arches and large openings of the Halle aux Locomotives. A ramp leads the visitor up to the central nave of the Hall where they join those arriving from Montbenon to the North. From the central nave at the end of the ramp a large spiral stair leads the visitor to the foyer in the old arcades where ticketing, information and the bookshop are located. From the arcades one steps into the Halle aux Locomotives; the rough, as-found space of the large Hall contains all the other public functions of the museum; a café, education spaces, an auditorium and a library. These different functional spaces are defined by minimal interventions; level changes and discrete volumes. In the future, when the MUDAC and Musée de l’Elysée are added to the site, the Hall remains at the centre, allowing all three museums to share these public functions. From the Hall one perceives the strictly North-South oriented galleries, two of which penetrate the external wall of the Hall and serve as entrances to the museum proper. The entrances lead to either the galleries of the Temporary Exhibition or the Permanent Collection, which are formed as two separate loops, each returning the visitor back to the Hall. The galleries are all at ground level and wind around internal courtyards which lend rhythm and orientation to the galleries while providing natural light and a spatial connection to the Terrasses Alpines above. The Terrasses Alpines above the galleries end the promenade which the visitor has begun when entering the Terrasse Boisée from the Place de la Gare. The tree-tops from the courtyards below blend in with the bushes on the roof to recall the vegetation of the foothills leading up to the mountains which are visible from here, conceptually collapsing the distance between the MCBA and Savoy. The Terrasses Alpines leads one to the Conservation Tower. This tower houses all utilitarian spaces of the museum; deliveries, carpentry facilities, art storage, art restoration workshops and administrative and curatorial offices. At the foot of the tower a café offers views over the railways. Beside it is an outdoor auditorium and a path leading up to a covered panoramic terrace which is carved out from the volume of the tower and offers stunning views over Lake Geneva and the Alps. The architecture We have chosen the Halle aux Locomotives and its surrounding topography to be the heart of our project. As such, the project’s architectural expression is generated by the essence of these core elements; their structural principles. The structure of the exhibition spaces is composed of a series of columns supporting large precast beams. The beams span the spaces below and support the large planting beds of the Terrasses Alpines above. Their efficient, concave form is ideal for reflecting natural light from the clerestory windows into the galleries. Finally, the new façades reinterpret the tectonics of the existing socle walls and cornerstones of the Halle aux Locomotives. Terrasses Culturelles A proposal by Harry Gugger Studio for the MCBA in Lausanne Project Credits Harry Gugger Studio Ahmed Belkhodja, Yann Gramegna, Harry Gugger, Coryn Kempster, Benjamin Barfield Marks, Noélie Sénéclauze, Raul Mera (Renderings) Vogt (Landscape Architecture) Katja Ries, Lars Ruge, Günther Vogt WGG Schnetzer Puskas (Structure) Salome Hug, Heinrich Schnetzer Arup (MEP, Lighting & Acoustics) Rob Harris, Andy Sedgwick, Stuart Smith, Becci Taylor, Hugh Quail Hansjürg Leibundgut (Energy & Ecology) Davis Langdon (Costs) Vincent Kane, Coralie Soudee Quartal (Costs & Construction) Patrick Defago, Stephane Michlig Claudio Moser (Artist) Peter Wilson (Museology) BDS Security Design (Fire and Security) Peter Graf Oswald Dillier (Model) Studio Tanuki (Renderings) Olivier Meystre