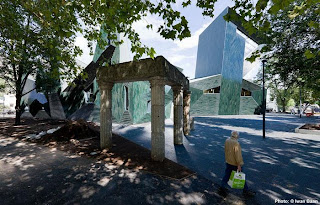 Few Jewish communities used to surpass the one of Mainz in importance and tradition. During the Middle Ages being the major center of religious teaching, this importance can be traced back to a series of influential Rabbis, especially Gershom ben Judah (960 to 1040) whose teachings and legal decisions had impact on Judaism at large. His wisdom was deemed to be so large that he was given the name ‘Light of Diaspora’. The new Jewish Community Center of Mainz attempts to draw out this tradition.
The history of the Jews of Mainz though, has also witnessed a different side. In almost no other city have Jews been persecuted so often throughout history, and have still time and again attempted to build up a Jewish community as in this so seemingly serene city of Mainz. Since the first mention of Jews in ‘Magenza’ around the year 900 the communities have been eradicated in a tragic regularity. And still, a few years later Jews found the courage to settle again in Mainz. Thus, almost paradigmatically Mainz embodies hope, learning and an unshakable belief in a future, and at the same time the destruction of Jewish culture and people over more than one millennium.

After the Holocaust the community is founded again by a small group of Jews. Up until the 1980s approximately 75 Jewish families are living in Mainz when immigration of Jews from the former Soviet republics increases this number sixfold. The existing spaces in a small residential building cannot fulfill the demands of the growing community for religious, social and cultural activities anymore. A new building for a synagogue plus community center becomes necessary, constructed on the site of the former main ‘Synagogue Hindenburgstrasse.’ 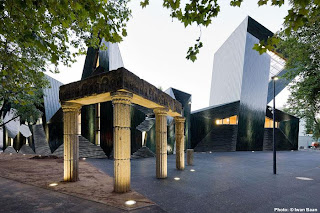 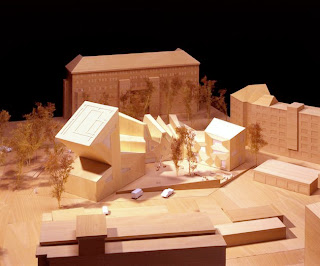 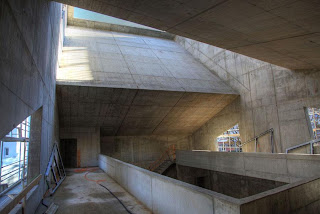 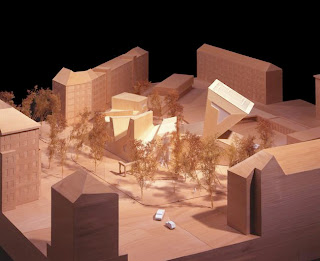 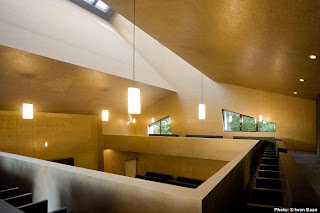 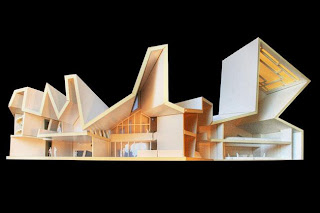 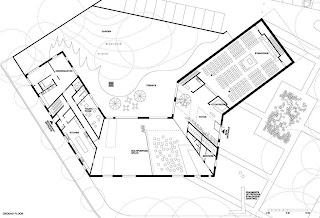 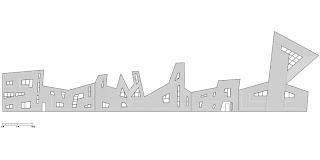 In its history Judaism has never developed a strong tradition of building. Nor has it developed architectural styles that, as is the case in other religions, try to translate certain values and credos into built space. Instead, writing and scripture could be seen as a replacement or substitute for spatial production in Judaism. Specifically the Talmud, written after the destruction of the second Temple and the beginning of Diaspora, can be viewed as a response to the loss of Jerusalem as Judaism’s central place, and as an alternative spatial model. The dimension
of the architectural traverses throughout the whole Talmud, from the content of individual chapters, via its method of redaction, to the techniques of arguing and debating of the Rabbis in its pages. Also on the level of individual words and letters, an object quality is expressed in the writings. The shape of letters shapes their meanings and gives them a specific character. Hebrew letters thus obtain an object quality, or a ‘thing-ness’. Demonstrating this, a typical technique of arguing and interpretation within the Talmud is the reorganization of letters within a word, to obtain completely new meanings. The Hebrew word for ‘word’ (Davar) has the additional meanings of thing or object. These object qualities of writing, as well as the concept of the Talmud (which found its central place of learning in the city of Mainz) as a notion of space, form the main design topics of the building for the Jewish community center of Mainz.

Qadushah is the Hebrew word for raising or blessing, whose five characters in an abstracted way shape the silhouette of the building. With the pronouncing of a blessing, such as the one for wine or bread, a profane object is raised or exalted. It is lifted out of the quotidian and made into something special. It is this act of making special that the building, in its everyday use, should allow for. The glazed ceramic facade points to a different layer of writing and scripture. Similar to a process of inscription or carving a pattern of a rippled and three-dimensional surface is formed with ceramic tiles. This pattern is arranged in a concentric way around the windows thus creating a perspectival play of dimensionality. Multiple perspectives with the windows being their vanishing points emerge within the building’s facade. This spatial quality is enhanced by the transparent green glazing of the ceramic tiles, which reflects the shifting light conditions of its surroundings and displays a wide array of hues and shades.
Urbanistically the building follows the block structure prevalent in the neighborhood, arranging the building’s volume and its facades continuously along two main streets. By turning inward and orienting the synagogue towards the East two squares or courtyards are created: Firstly, a public square in front of the main entrance which directs members, visitors and inhabitants towards the building while at the same time offering an open space to the neighborhood within a densely built-up urban fabric. Secondly, an internal court for the community is created. This inner court gives the community space for their celebrations, for outside events or parties, and a space for kids to play.
The synagogue, situated just right from the entrance, is dominated by a horn-like space referring to the ‘shofar’, the ram’s horn. Based on the prevented sacrifice of Isaac by his father Abraham, the shofar symbolizes the connection and the trust between mankind and the godly. The organization of a synagogue space is usually characterized by a certain inner contradiction: Synagogues on the one hand want to be oriented spaces, directed towards East or Jerusalem. On the other hand a centralized space is preferred, as the reading of the Torah is performed from a central position in space, and from the midst of the community. This inherent contradiction is spatially resolved by the horn-like roof that distinctly orients the synagogue space towards the East, but bringing the (easterly = Jerusalem) light right into the center of the space, falling exactly onto the position from where the Bible is read.

The interior surfaces of the synagogue are shaped by densely packed Hebrew letters forming a mosaic-like relief, though creating no semantic content. In certain areas this density of letters is reduced, the letters rearranged,and text becomes readable. ‘Piyutim’ (religious poetry) written by the Rabbis of Mainz from the middle ages are carved into the surfaces of the synagogue. In an almost ‘Brechtian’ language these Piyutim narrate the love for the Torah in allusion to the ‘Song of Songs’ or the events around the destruction of the community during the first crusades, and reference the central role of Mainz for Judaism.
Furthermore, the Jewish community center houses office spaces, school rooms and two apartments as well as the multipurpose space of the community. This multipurpose space represents the social and cultural heart of the community and will be used for internal purposes as well as for public events for and by the whole city.

Jewish communities in Germany are often marked by the desire not to raise much attention with their activities.
They play only a minor role in the social and cultural live of a city. This is partially based on a fear of growing anti-Semitism, and partially from a feeling of shame for living in the country of their family’s murderers. This synagogue, in a city of one of the most important Jewish communities, tries to help develop a different consciousness. The new synagogue is a building that with confidence marks a new active place on the map of the city. It wants to attract the inhabitants of the city, Jews as well as non-Jews, for them to participate in its religious, social and cultural activities. It is a building that will raise attention, maybe questions, doubts, interests or maybe even anger, but also hope. First and foremost it is a building that will help make the Jews of Mainz into a visible and active part of society and link them with their rich history.
In Germany, a country where synagogues always also have a political relevance, this building shows the power of Diaspora.

One thought on “Manuel Herz Architects”