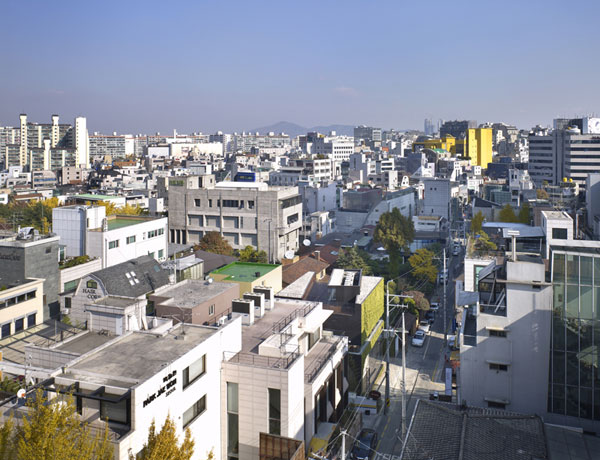 The site is located in an alley, at a block’s distance from Dosandae-ro – a busy thoroughfare in Seoul’s Gangnam district – in close proximity to Dosan Park. Primarily residential in the past, the neighborhood is undergoing a rapid transformation into an upscale commercial district full of shops and restaurants.The building is comprised of one subterranean level and three floors above.

This building is not meant to be just another ‘object’ to be experienced externally, but rather as a synthetic organism of nature and artifice.The parking lot/courtyard is at the center of the site, exposed to the street on the southern end. The entrance to the Ann Demeulemeester Shop is located on the western side of the courtyard, and stairs that lead to the other two programs are located on the eastern side. Landscaping of dense bamboo form a wall along each of the remaining three sides that border neighboring sites.

Inside the first floor shop, undulating dark brown exposed concrete forms an organically shaped ceiling. Round columns on the edges of the space continue the ceiling surface while providing the necessary structural support. This structural system creates arched openings of varying sizes that are open and as exposed as possible to the outside road and the bamboo hedges. This organic formation is not only a dynamic space but a flexible rectangular one (11.2m x 14m). The additional wing on the eastern side contains support functions such as fitting rooms, storage, and a bathroom, efficiently divided and connected at the same time.The restaurant’s main entrance is a staircase that runs alongside the entire eastern side of the building. The shape of the ceiling below influences the restaurant space above, comprised of a three-level skip-floor formation. The two open-air spaces inside, a hidden terrace toward the rear of the building that extends from the top level, and a rooftop space accessible by stairs form a restaurant with intimacy, varying in spatial characteristics.
The stairs leading to the basement shop begins as a narrow, white, architectural space that gradually enlarges to become another organic shape—like a moss-covered subterranean cave—and serves as an entrance. This space is open to the outside, while at the same time is a composite garden buried 5.5m below ground.The outside building material is primarily a geotextile planted with a herbaceous perennial to form a living façade, while the other three sides that face bamboo borders are clad in steel sheets are finished with propylene resin.
_ 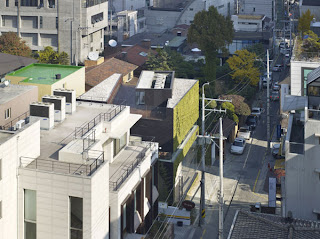 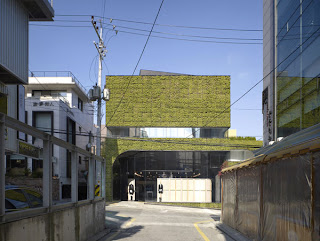 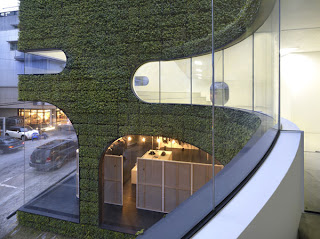 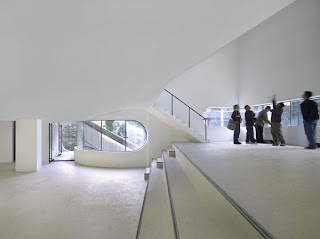 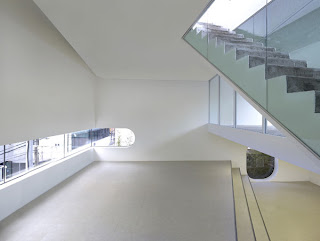 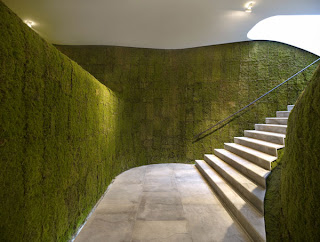 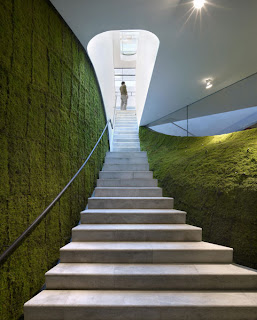 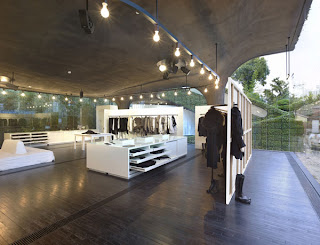 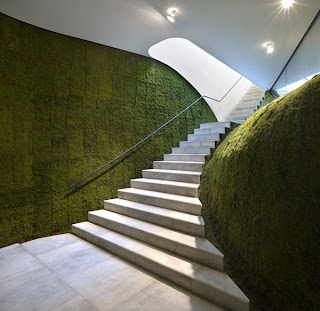 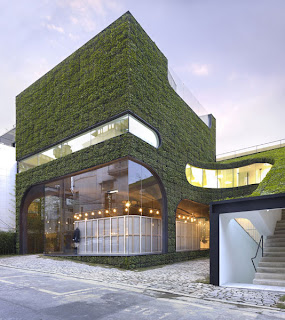 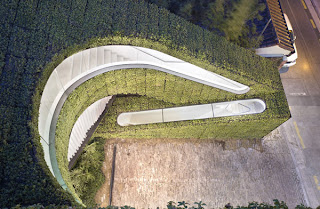 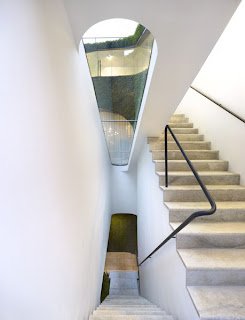 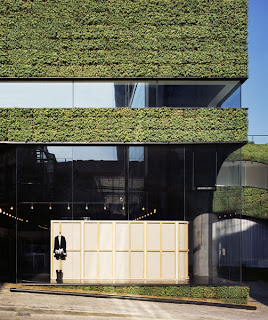 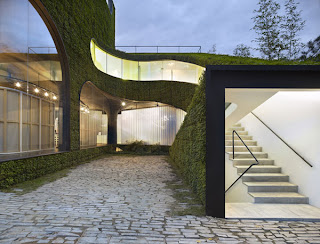 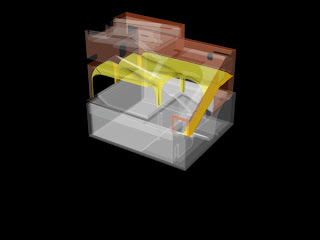 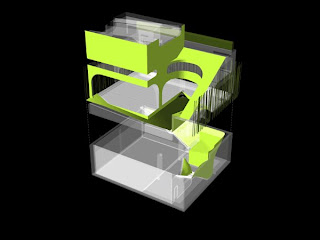 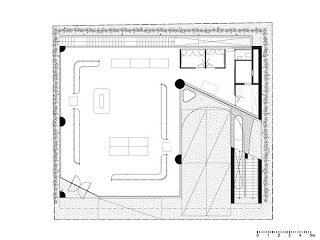 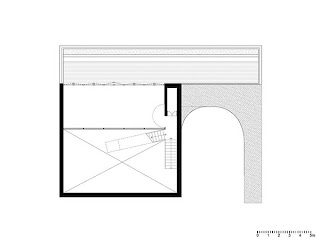 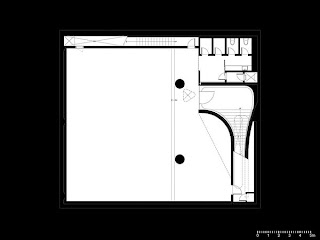 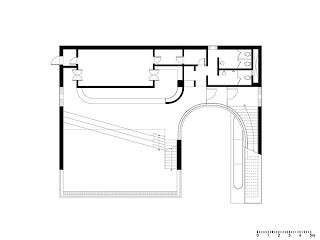 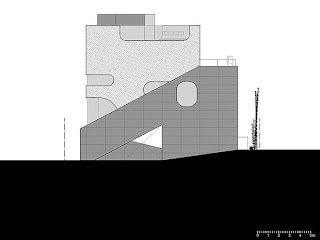 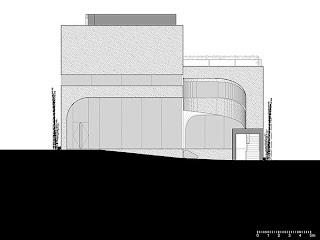 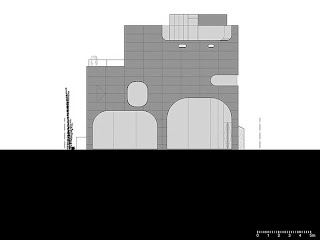 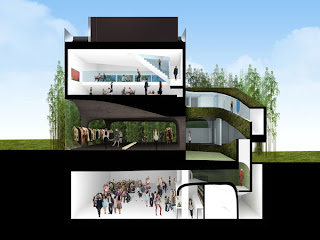 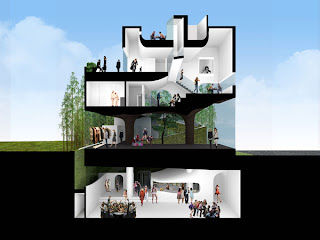 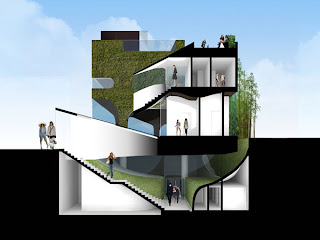 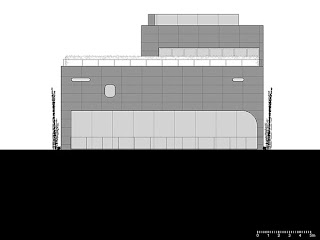