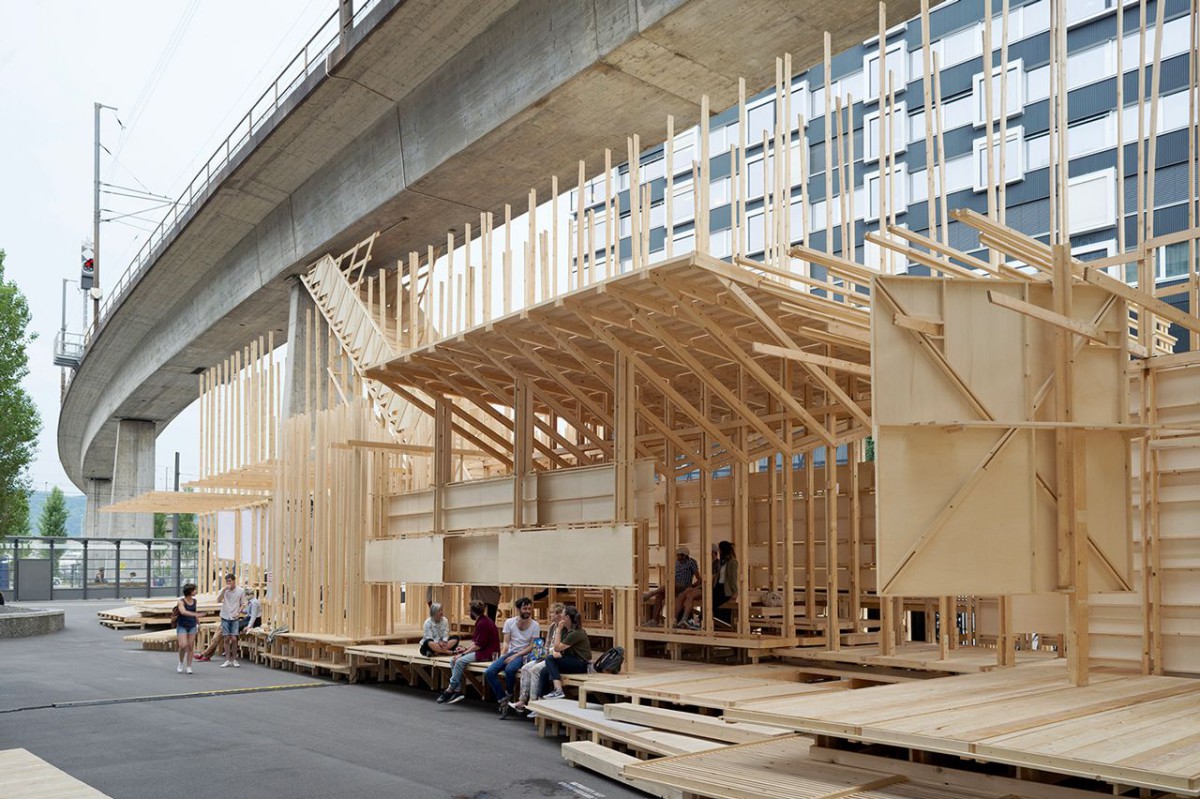 HOUSE 2 – COUNTER CITY is a 240 square metre public architectural installation situated next to the Toni-Areal in Zurich. The project is based on an experimental format for collaborative design and construction conceived by ALICE (Atelier de la Conception de l’Espace) — a laboratory of EPFL led by Dieter Dietz.
_

Erected in less than 10 days, the project involved 200 first-year students, who prefabricated all the built elements of the installation in Lausanne and transported them across Switzerland in six shipping containers to Zurich, where they unloaded and re-assembled them as a full-size ephemeral structure. Devoted to social and cultural events, the public installation is not a homogenous architecture, but rather, the result of various different contributions. Each offers an approach to spatial appropriation by many voices, in a dialogical process that questions the quality of public life in view of growing cities around the globe. In reference to Richard Sennett’s recent book “Together”, strong emphasis is given to the notion of collectivity and the negotiation of space of social difference. The project works as a pedagogical tool that materializes these topics in the design- build process, and in its physical and spatial parameters.

The previous year’s experiment, HOUSE 1, was the configuration of an archetypal house collectively built as an in-vitro condition: an on-campus installation in Lausanne, by students for students. The rooms of HOUSE 1 were engaged primarily in forming a series of interior relations: HOUSE 2 has evolved from this premise, turning outwards, setting itself in relation to the city, and becoming a common place of activity and urban participation.

In order to foster civic engagement, ALICE, in close collaboration with the Zurich University of the Arts (ZHdK), has jointly programmed a series of events for summer 2017 to take place in the context of the installation, between May 31st and June 15th. These include guided tours, theatre and music performances, a sound installation, symposia, student critiques and exhibitions, and an open-air cinema.

From Zurich West, HOUSE 2 will travel on to Lausanne, where it will take on a new form and new programme during the summer of 2017. In autumn, the structure will be disassembled and the wood preserved to be reconfigured into HOUSE 3 for 2018.
_