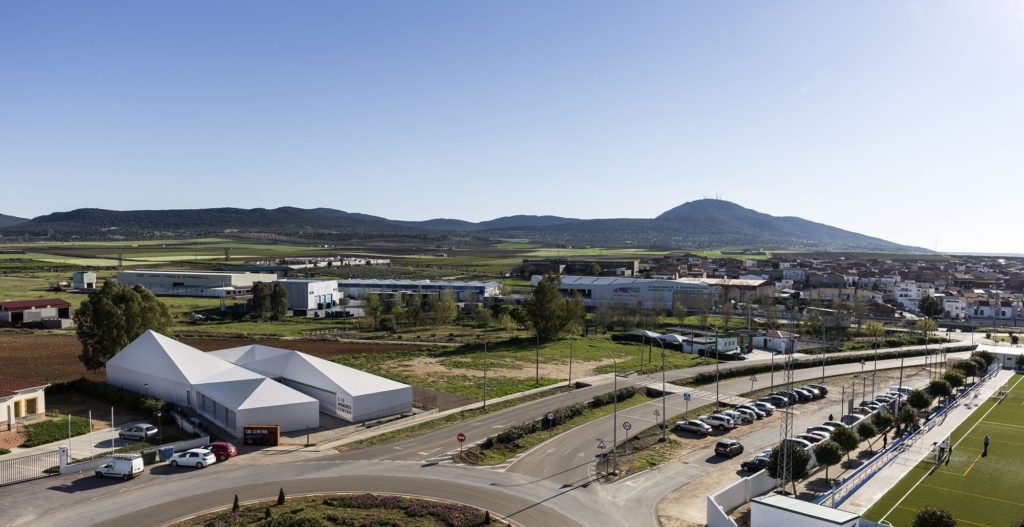 The building is part of a network of centers that serve different regions, decentralizing the functions of the Diputación de Badajoz, given the size of the province. Thus, a series of endowments linked to fostering entrepreneurship approaches the rural centers. With a specific program, the building generates a sense of identity in an area that lacks it.

The plot is located in the urban edge of the small town of Calamonte, on a land platform that visually dominates the surrounding farmland. From this location, which gives it a special value in the city-field-landscape relationship, leave the main formal and conceptual decisions that inspire the project. Furthermore, the presence of the building far from the road access routes, also causes the building necessarily respond to them. Therefore, the roof emerges as the fundamental element of the design. Seen from afar, the building completes its compact presence thanks to it, dialoguing with the landscape of hills surrounding the place. Closeup view, the roof provides greater height spaces that require it, such as the assembly hall, likewise providing dynamism and special character to interior environment. The compactness of the volume required an abstract formalization.

The building is implanted in the plot adapting to its longitudinal form. The generator concept of the plant is the opening of a crack-patio in its central axis, which runs through its entire length, becoming the main space of the project. In the north façade, this crack configures the public access between volumes, and after passing the vestibule, continues characterized as a more introspective space. The required program, consisting of administrative uses of support to entrepreneurs, is organized with the highest programmatic rationality and economy of circulation, guaranteeing the required flexibility. Uses are grouped into three clearly differentiated units: the business incubator, support offices and meeting rooms, arranged around the central lobby, center of gravity of the building that facilitates the quick orientation of the visitor. This zoning of the small building solves the problem of the compatibility of use in function of the different schedules that each zone has. Thus, an entrepreneur can have night access to his office without having to open the entire building, which makes it much safer to use.

The short palette of materials reinforces the geometric power of the volume: in addition to the white outer envelope, finished with a liquid polyurethane membrane, only found concrete seen in ceilings and floors and different degrees of transparency, from glass to cellular polycarbonate, which sieves the light and controls the direct solar radiation. In addition, two factors have been decisive for the choice of materials: durability, maintenance is the minimum necessary, and maximum degree of interior comfort, understanding this from a thermal and light point of view. On a minimum structure of steel pillars is executed the concrete slab that formalizes the volume. The vertical enclosures are of brick, finishing all the envelope with external thermal insulation and the continuous white coating. The translucent double-paneled polycarbonate facades act highly efficiently in the thermal and provide an unbeatable lighting level to the workspace. The glass is arranged in a controlled way to frame the surrounding views. The project integrates, in turn, a proposal of gardening in accordance with the objectives of energy saving and low cost of execution and maintenance.
_