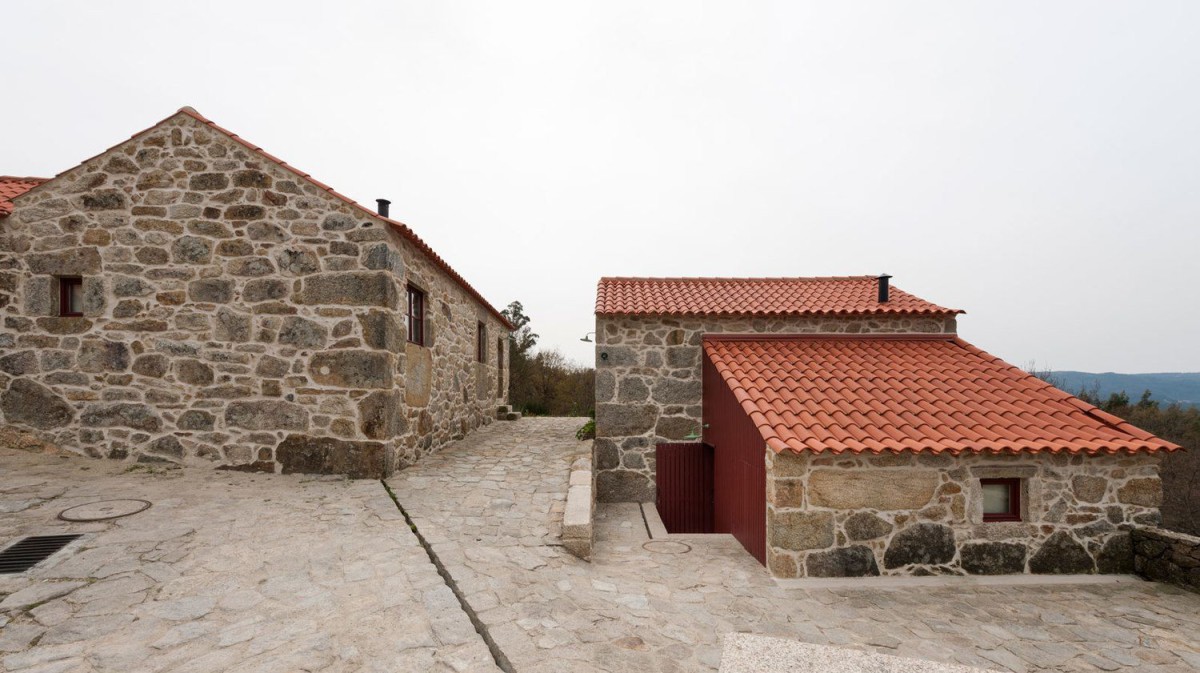 The presented project consists in the transformation of nine houses for tourism in a rural area, dispersed by the small village of Trebilhadouro which, given its reduced size and the proximity between constructions, sees most of its built heritage being subject for a joint rehabilitation.

The village of Trebilhadouro is located on the west side of Serra da Freita, in Vale de Cambra, at about 625m altitude. Its strategic position provides a privileged view of the surrounding territory, in particular of the Ria de Aveiro. It is a small village, where the buildings are located along a central route that crosses the whole township. This route, with access from the municipal road, crosses a series of agricultural terraces to reach a more stable height where Trebilhadouro is located. In the centre of the village there is a fountain and a small dam for watering the lands. The buildings are small, mostly with two floors, built in stone masonry with roof structure, the intermediate floors are in wood and roofing is in ceramic roof tiles. The ground floor was mainly intended for animals and agricultural implements while the upper floor was reserved for housing. These are modest houses with very reduced areas and rudimentary construction, emphasizing the quality of the architectural aggregation and its implantation in the territory.

The village was in a fragile situation, the buildings left in ruins had few memories of its past, becoming a necessity to rewrite one. Based on the existing constructions and with an analysis of the buildings in the region, an intervention principle was reached by focusing on recovering the characteristic architectural language of these constructions. The punctual extensions followed the primitive constructive principle, both on a material level and in its design. A homogeneous and coherent image was sought for the group of intervened houses. The size of the village didn’t allow for a great diversity and contrast of languages. The opportunity to recover much of the remaining buildings proved to be an enormous responsibility by constituting itself as a built body that could be used as reference for future recoveries, as it came to be. The program was shaped into the primitive compartmentalization, entrusting the reading of the interior space in its totality, concentrating service spaces in small “boxes”. The reduced scale of the houses was preserved as memory and whenever necessary, the proportions of these spaces were reproduced.

Defining a hierarchy in the characterization of spaces was sought using two separate systems of detail: the first, in small buildings, characterized by the simplification of encounters between materials, using grouts with additives with iron oxide “burned” with a trowel, apparent stone masonry on the walls and apparent wood frameworks for the ceilings; a second, applied to more relevant buildings, using wood trims as skirting boards, door frames and ceiling coatings with a traditional wooden design. The hierarchy in detail, present in Popular Portuguese Architecture, is in this case related to the importance of the compartment. For this project, the use of local materials was privileged, using the native eucalyptus and pine wood, among other materials like the yellow granite also present in the area. The labour involved, that was from the region, applied crafted construction techniques. The stone trims used in the expansion of the volumes was originated from demolitions and were repurposed in this context, resulting in the reusage of a material and a better integration between the new and the more primitive masonry.
_