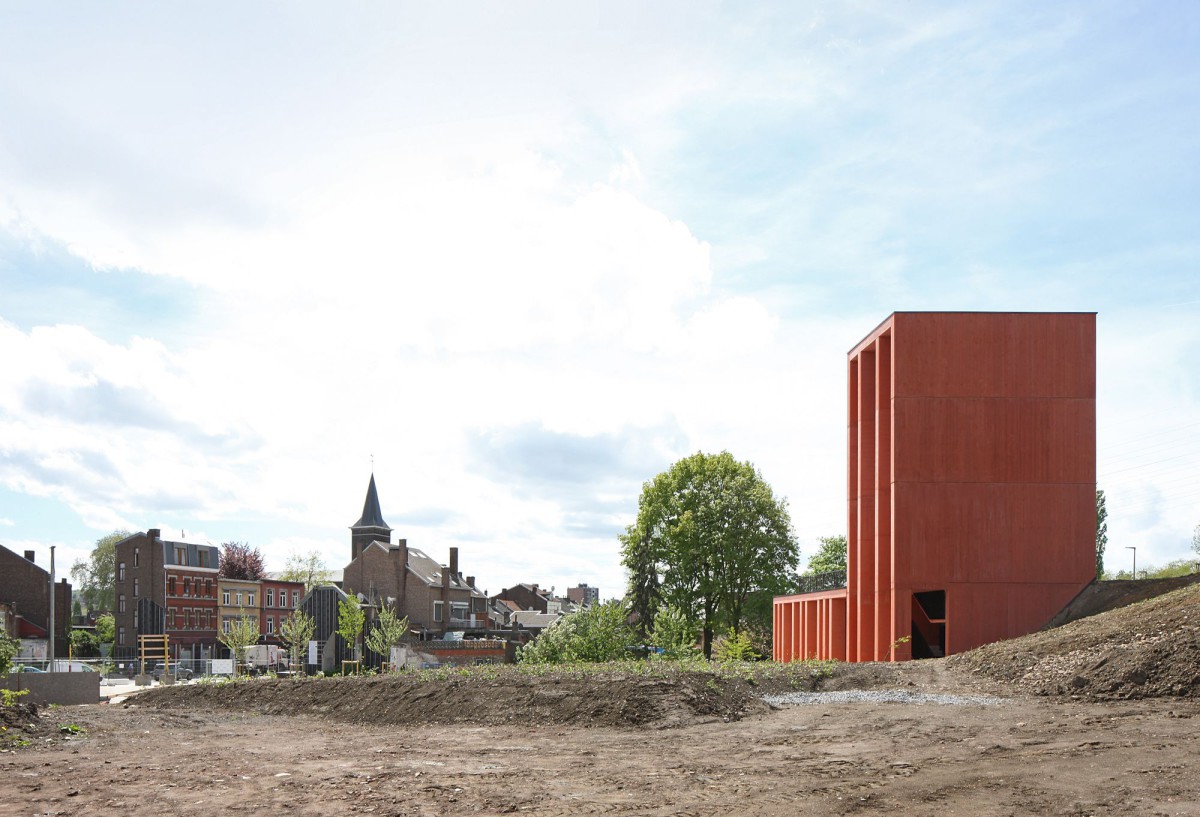 A sequence of public spaces to connect the heart of a city, new collective housing, public facilities including a train station and a landscaped area
_

Facts: a dense and decrepit city block, a lack of public space, and a forgotten landscape
In Herstal, an old city block made of hangars, and abandoned houses left place to a set of city spaces such as a new train station, housing and shopping facilities (work in progress) articulated around a new public square. The project also includes the refurbishment of a park containing urban vegetable gardens for the inhabitants of the city.
Intentions
– To create a sequence of public spaces that are connected to each other by dealing with the declivity between the upper and lower part of Herstal. The main ambition is to define a chain of public spaces that integrates the pendent platforms. At the lower level a new public square is thus created. The station with its belvedere then generate an intermediate level and consequently connects the lower and upper level of the city.
– To position the station on the city side. The new station marks the new square and is orientated towards the heart of the city, acting as a connector for the different districts around by the means of requalifying the public spaces.
– To connect the landscape with the city. The sequence of public spaces that is defined connects the hidden landscape in the background (green hillsides) with the valley (the city and its urban fabric). These connections are created by opening new perspectives. These views allows to create link to these previously dislocated elements of the landscape with the urban context.
– To bring a new mixity of urban activities to activate the new pole.
– To create open spaces as a support for urban life. The project creates a new frame for the public spaces containing a new public square in a part of the city which lacks of that.
– To build a sustainable, compact and very low energy building.

Rythm, ligh and material… A sustainable project with a strong identity
The materiality has been thought as a structuring element of the project. The station is built in red self-compacting exposed concrete. The lateral side of the building have a raw texture left by the timber formwork. This character is bond to the inherent identity of the project, a building made out of a sloping ground.
The front facade is smooth and is addressed to the users of the public space.
All the technical complexity of the project is integrated in the project to create this very simple and raw expression which is support to generate very simple and well-defined public spaces.
The public square is made of cast concrete with white quartz aggregates giving a luminous character to the square. The benches are made of white concrete. All the materials have been chosen for their sustainability regarding the intensive use of the public space.

As a conclusion, the projects aims to be both modest and very ambitious at the same time to its surroundings and set a new frame for public spaces in order to support new urban life.
_