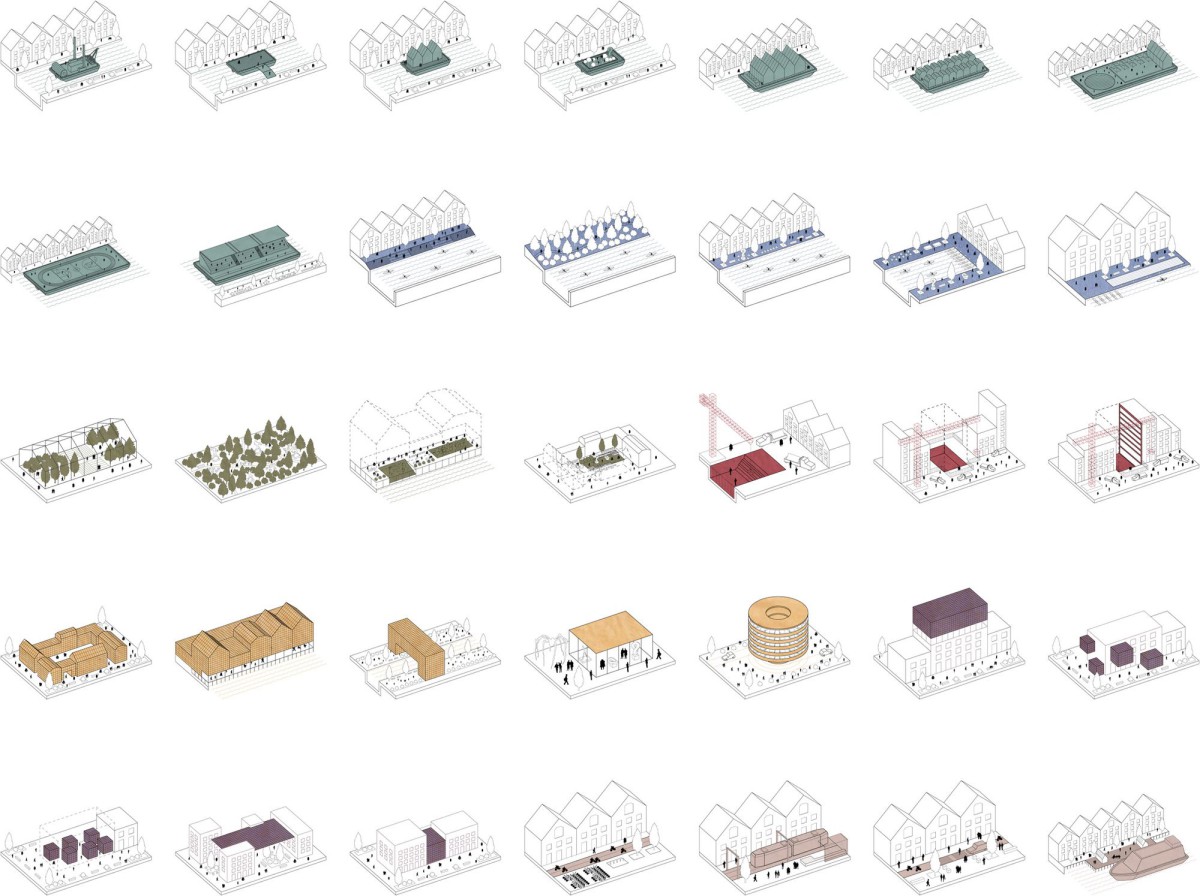 Europan addresses, for the second time, the matter of adaptability to the ever-changing condition of cities, along with the investigation about extremely actual concepts such as temporaryness, flexiblility and sustainability.

The False Mirror / Det Falske Speil
Eventually set aside the superordinate paradigms of the Modern, nowadays it’s possible to outline a new trend within the urban dimension: what is flexible and fluid tries to replace what is permanent, the serial multiplicity substitutes Identity, while the generic scrapes away the specific.
In a context where such acclaimed adaptability seems to be no longer a conscious attitude, but a dogmatic precept, the false mirror internalizes such premises facing the automated enslavement to this belief and questions the foundation itself of this process: to what extent can the use of standardized, repetitive and environmentally adaptable elements represent a solution for a whatever city without losing the identity of that city itself? So, getting away from the common scenery visualized by this fortunate encounter between a very high-tech formalism and the misleading aesthetics of green sustainability, the false mirror tries to define a different declination of the word adaptable.
Right from the critical reading of the main topics raised by Europan 13, Trondheim pops up like the perfect case study where testing a process based on the coexistence between the demanded flexibility and the specificity of a waterfront, along with its cultural, historical and urban background. Therefore Europan 13 turns into the perfect playground to experiment an innovative, heterogeneous approach where the obsolete slogan “from local question to global solution” naturally switches to a more appropriate “from global requests to specific solution”, while Nyhavna becomes the stage of a renovation process where the refusal of “green-tech”, neutral devices makes room for a hybrid vision that combines the pre-existence with a flexible process of transformation.
Strandveikaia’s neighbourhood -and, more in general, all the harbour district of Nyhavna- is the testing ground where playing out our personal declination of the adaptable city, thanks to an approach able to combine a new waterfront, the existent heritage, the renovation of an industrial district and the presence of cultural actors.
Looking at this miscellaneous context, the false mirror launches an inedited renewal process in which combining the reinterpretation of four local archetypes:

The typological reinterpretation of the warehouses:
the morphology of one between the most iconic architectures of Trondheim represents the starting point for the formulation of a new hybrid typology able to establish itself in Strandveikaia through an urban characterizing pattern.
Distancing from any kind of nostalgic revival, the former concept of the warehouse is revisited as a multifunctional typology characterized by an utter permeability at the street level: a polyhedric structure raised on pillars suitable to welcome different programs (such as co-housing, residential, offices, wintergardens..) and designed with a contemporary linguistic code.

The canalization of the whole Strandveikaia’s neighbourhood:
the historical relationship between the harbour district and the water is re-established through a compelling dejavu created by a system of canals which give back to Strandveikaia its original sea View. The canals are an interactive fluid infrastructure able to give life to a new urban metabolism, turning Nyhavna into a limber playground, theatre of social interactions and flexible developments.

The new fleet of temporary and multiprogrammatic barges:
as an answer to the need of temporary and flexible spaces, the false mirror takes advantage of the local-produced barges and ships. Trough a process of recovery, transformation, re-arrangement and reuse, the Trondheim’s fleet interacts with the new infrastructure given by the canals through partecipatory processes and maintains the metabolism of the district. Temporary bridges, floating shipyards, pavilions, water and green parks, saunas and floating markets are just few examples whereby Strandveikaia declines his artistic nature. Conceived as a generator of different and vibrant sceneries, the new Trondheim’s fleet reveals its twofold nature: on one hand they temporally host all the cultural activities running within the heritage buildings under the renovation process; on the other they continously transform Strandveikaia’s waterfront in an ever changing machine for programs, exhibitions and events.

A new land-water network:
the infrastructural network induced by the canalization process, connects the district of Nyhavna, the waterfront and the city centre, thanks to a new system of urban ferries. With the aim of sewing up the gap between Strandveikaia and the city centre, a public network on the land accompanies the water infrastructure, in order to discourage the massive use of private vehicles in favour of an implemented public mobility system, thus aligning the guide lines of the Municipality masterplan.
Restricted traffic areas for residents, juxtaposed by a new bycicle and pedestrian path, cross the site to rejoin the connection system included in the masterplan, while a new tram-line connected with the city centre helps out the defragmentation process of linking Strandveikaia to the central neighbourhoods of Trondheim.
The combination of these new features, starting point for the renewal of Stranveikaia, takes shape through the development of a typological abacus consisting in 52 elements (sorted by type and characteristics). Rather than standard devices, ready for a possible, homogeneous and neutral application, each element lives a proper, specific life and rapresents a direct declination of the four archetypes the process is based on. Contextually adapted rather than generically adaptable, the elements of the abacus give Trondheim an inedit compromise between innovation and tradition, flexibility and permanence.
Whether the false mirror answers the demand for an urban renovation -combining the four archetypes to a site specific package of elements- Strandveikaia might become the manifesto for a new way of understanding the XXI century’s city through a parallel reflection upon the development process itself.
The contemporary urban context, together with its addiction to punctual strategies and transformation processes, can no longer rely on programs whose completeness is the only guarantee of success. A weakness that might be found as well in those aislated and autonomous processes whose lonely, happy existences reveal the inability to build up a system within the metabolism of the city taken as a whole.
The false mirror starts up a process of renewal in Strandveikaia replacing the linear dimension of the temporal progression with a system of situations based on the interactions between the programmatic conditions offered by the context and the specific solutions derived from the abacus.
Without the need to outline the future of Strandveikaia through the rigid boundaries given by a strict time schedule, the development process of the harbor district of Trondheim grows through a network of interactions unlinked to a precise time sequence.
Strandveikaia becomes the stage of an interactive and flexible process of interconnected situations, where the logical replaces the chronological and the trial and error strategies make room for a new trial and goal philosophy.
The false mirror project defines the district of Strandveikaia as a new thrilling scenario for the waterfront of Trondheim, through a plan that works with time and against the generic city.