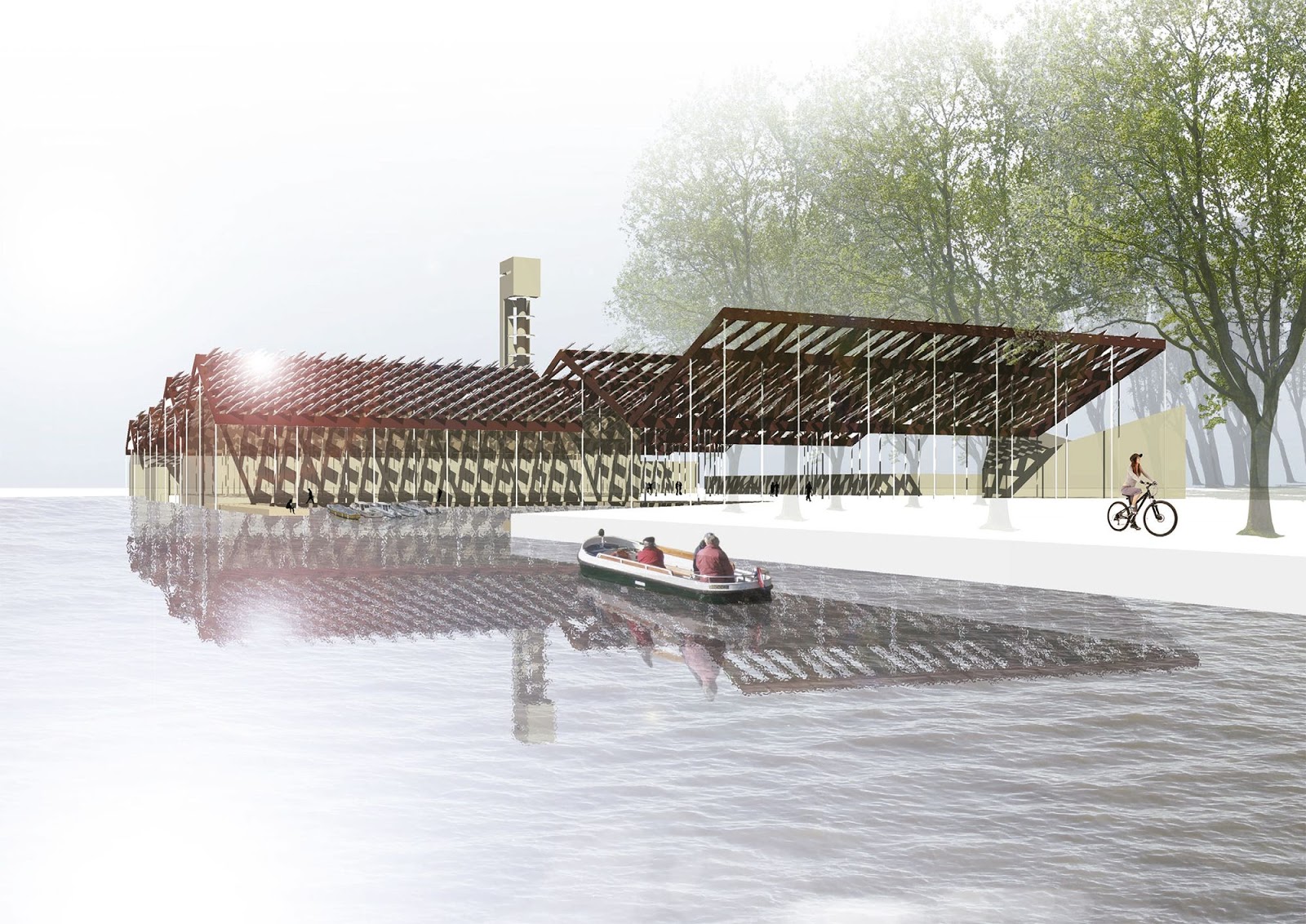 Uploading city is a proposal for creating a sustainable market hall that will upload itself over time. It uploads in a literal way by making use of solar panels on the roof and figuratively by the new activities that will be developed here. 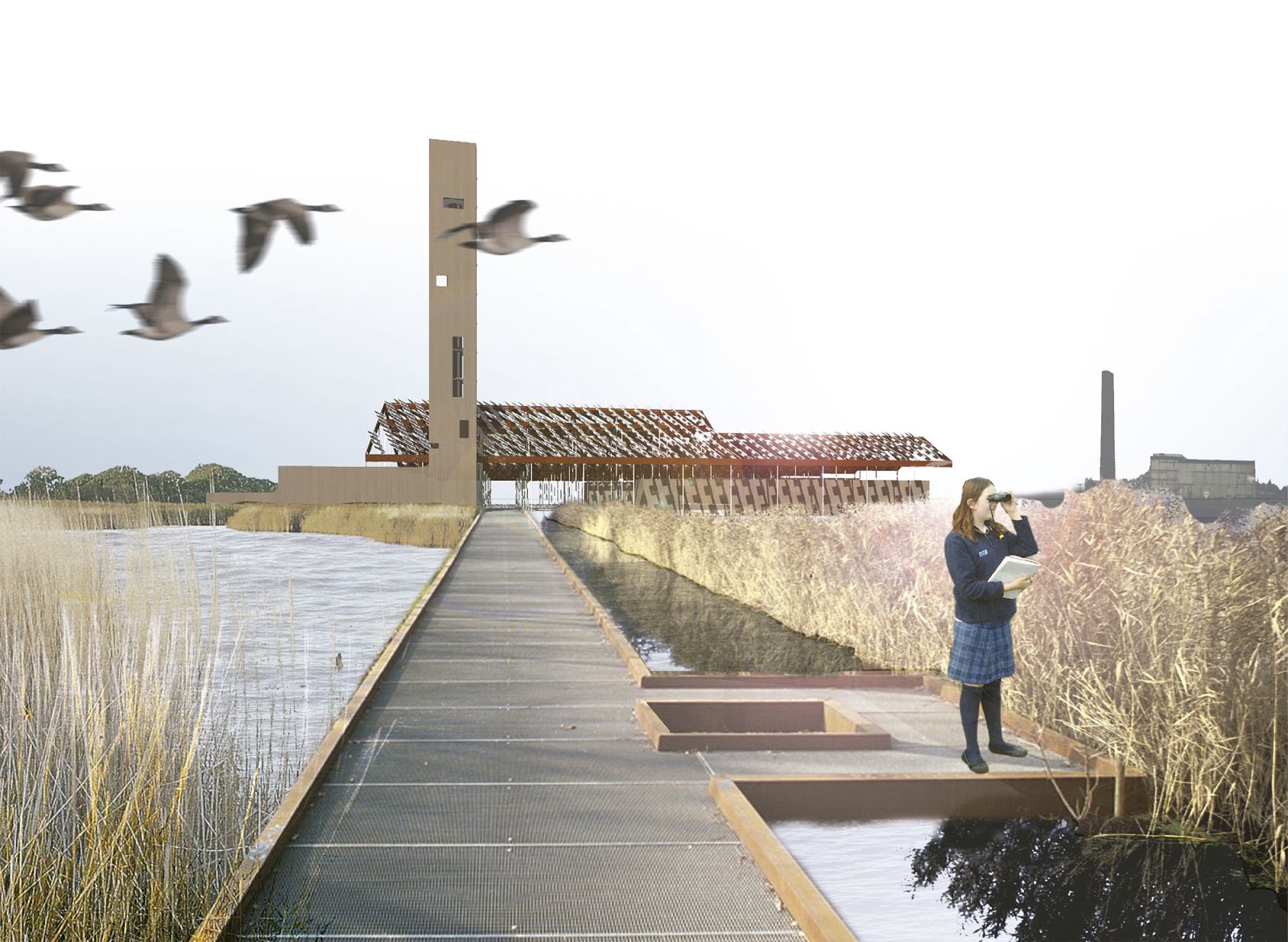 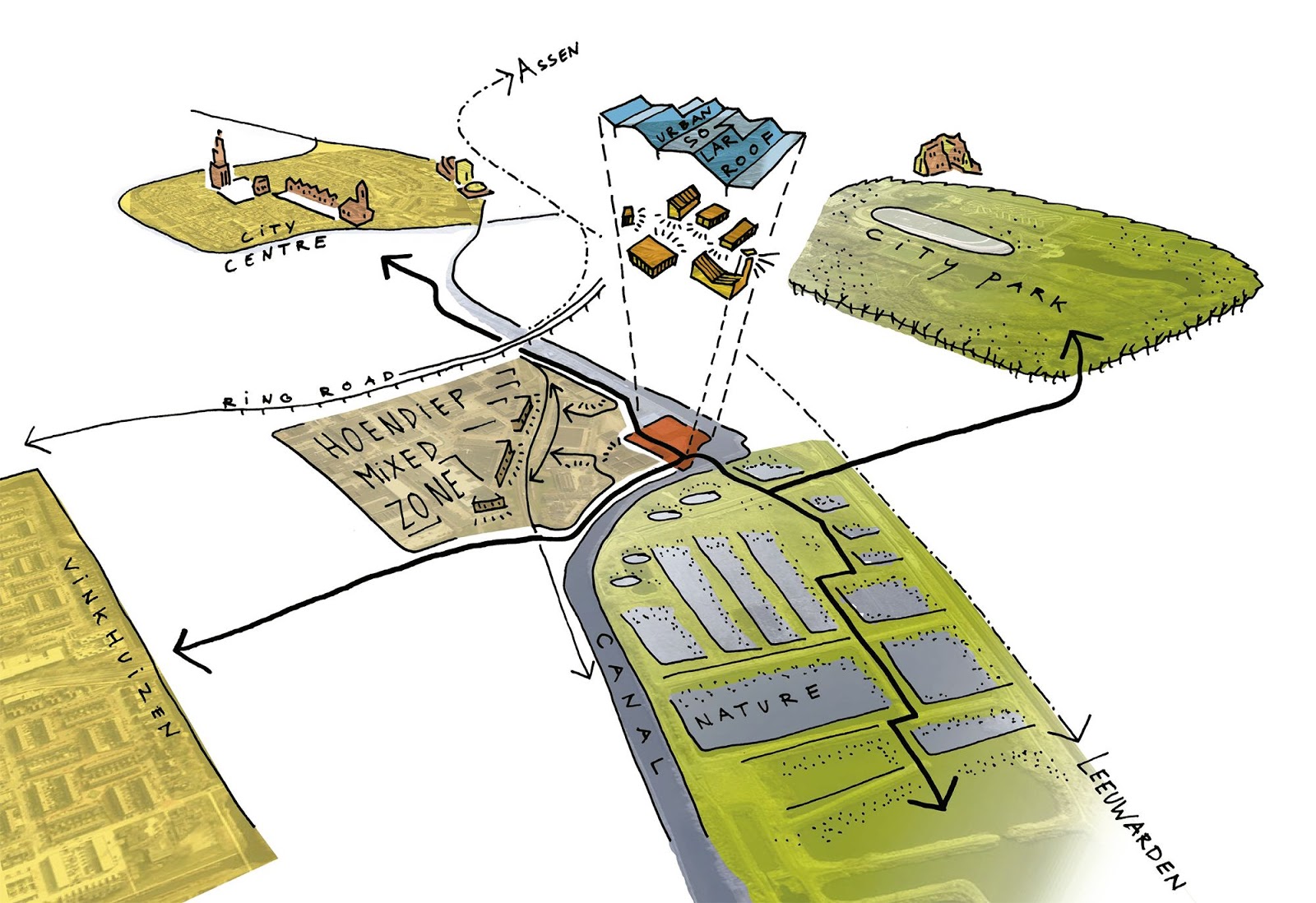 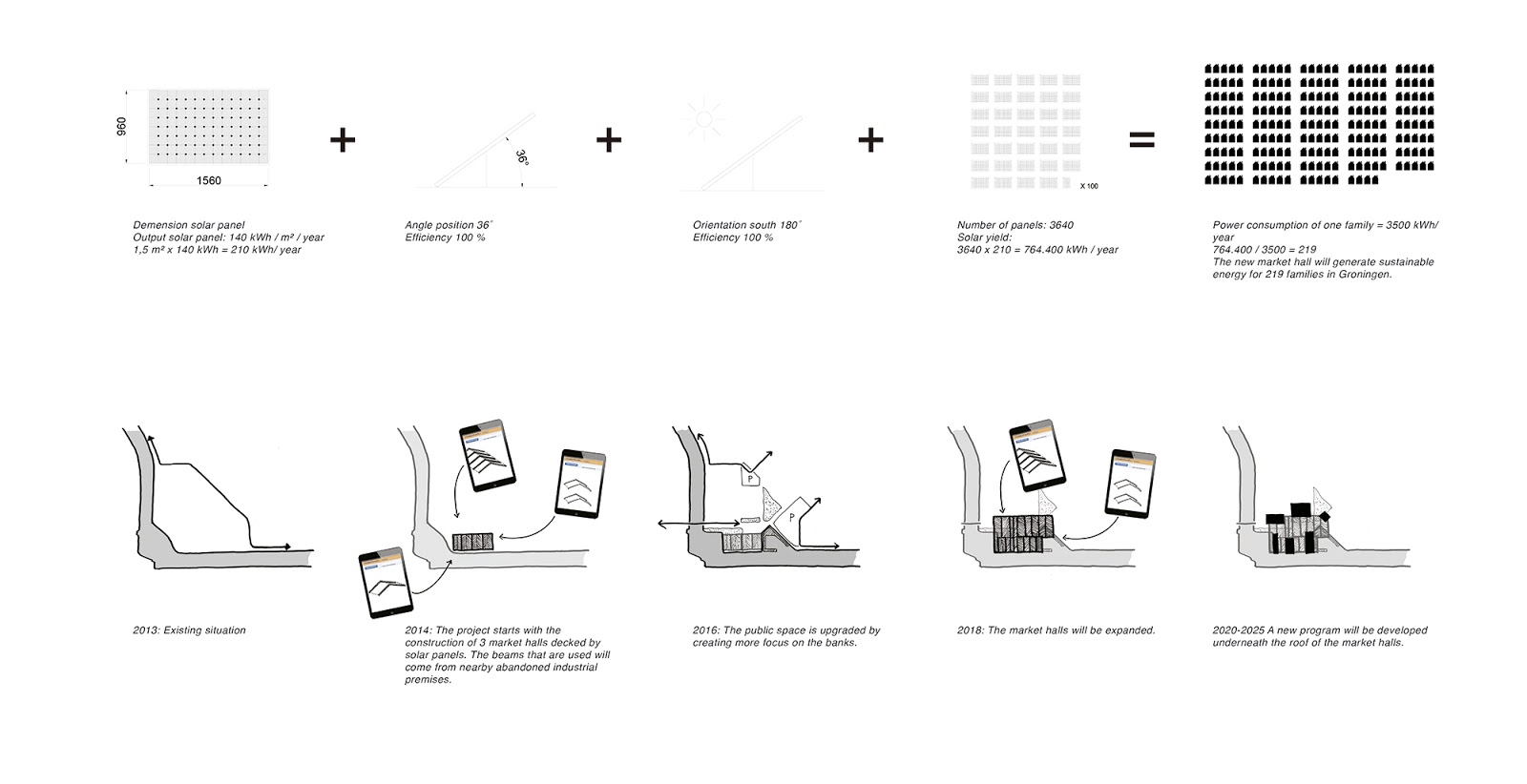 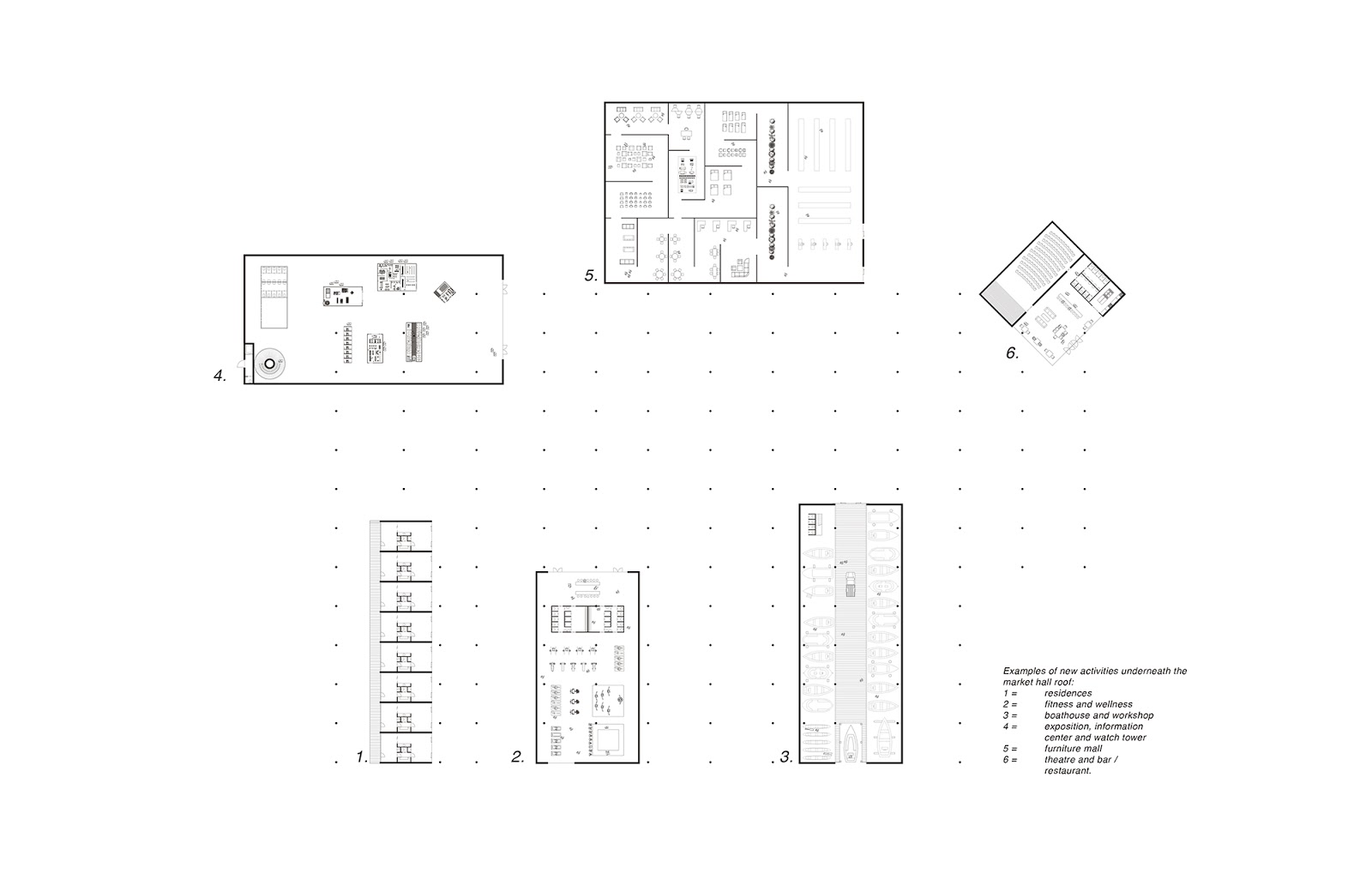 In between
The location appears to be forgotten. It’s enclosed by abandoned industrial areas and a depressing furniture mall, in between a canal and a ring road. But also in between the city and a magnificent new natural site, sprung from the old sewage farms of a sugar factory. This current state of ‘in between’ can be transformed to a valuable link within the city, making new connections possible.
Connect
The new cycle bridge over the canal connects Groningen’s city center directly with the new natural sites created by the sewage farms. It also provides a direct connection between the northern residential area of Vinkhuizen and the southern city park. The location of the new market hall lies at the intersection of the north to south, as well as the east to west cycling and walking trails.
Reside
The stores in the furniture hall are surrounded by traffic and parking space. The public space is now dominated by cars. By restructuring traffic and rearranging parking space, a more qualitative public space is created in which pedestrians and cyclists will have more moving space. This will create an area that has more residential qualities. The stores get a makeover to give them more of a face and two extraordinary squares will be created: a green square and a roofed public square.
Upload
The roof over the public square is designed as a tilted solar plant which is directly connected to the energy chain of the nearby KEMA Institute for Energy and Sustainability. This creates a market hall that can be used for a wide range of activities (events, markets, performances). The huge roof is an invitation to come up with new programs. Over time, the hall can be filled (uploaded) with new volumes, each with their own programs. The hall is used as a link between water, furniture hall, sewage farm and offers space to new activities and future developments. For the construction of the hall, secondhand beams will be used. Remember
The silhouette of the roof will redefine this space’s character, one that fits into the rough setting of the east side of the city. It also refers to the industrial history of this area.