During the visit to the project place, we realised that the idea of transforming Dubied’ goes hand in hand with acting in line with the production methods of Couvet landscape. 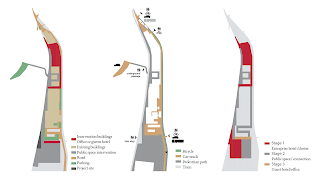 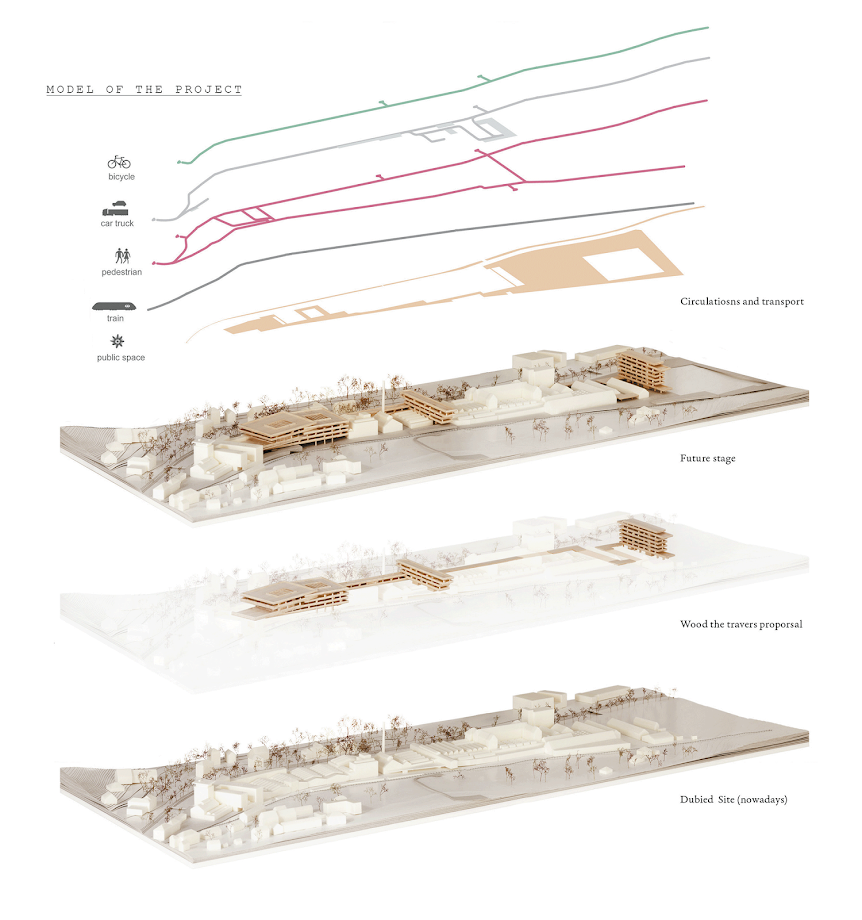 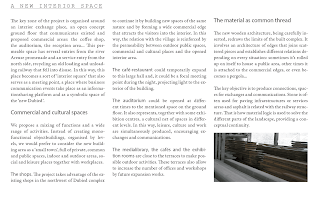 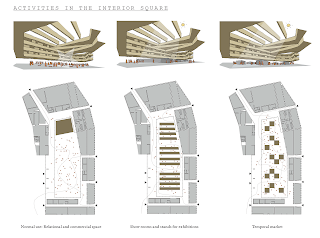 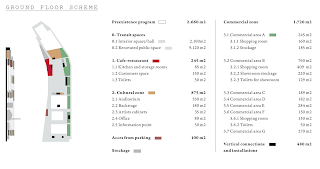 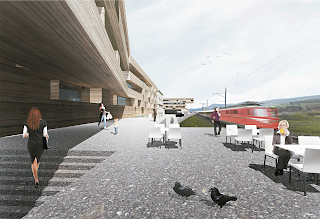 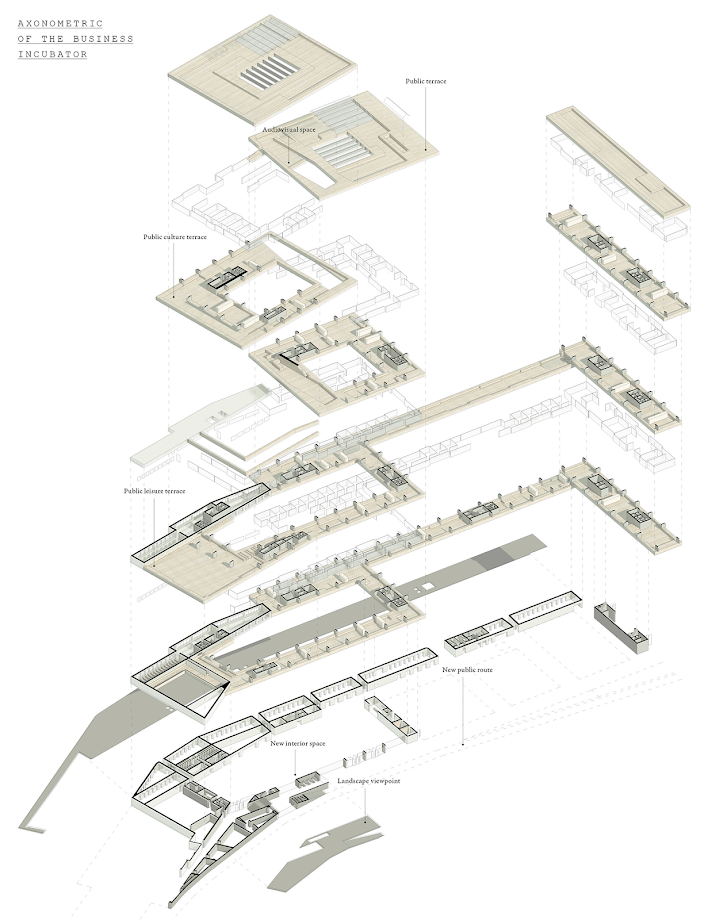 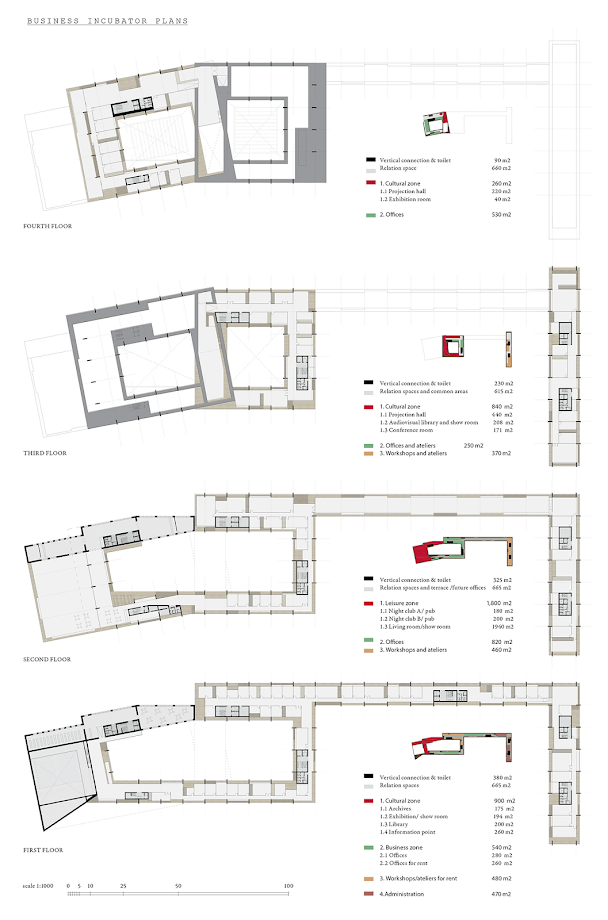 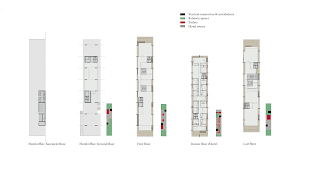 Interwoven landscapes
To this end, we decided to link natural production processes with other cultural building processes. On arrival at the place, we decided to take pictures of whatever could show any evidence of those processes and, finally, a possible project arose after every picture.
We decided that this equipment would be our building materials, not just wood, stone and asphalt but the stacking methods and the ties that bind places with territory.
Thus, the ‘labyrinth of industrial build­ings’ is offered as a landscape to be trans­formed according to reusing logics and selective demolition. These logics involves the recycling of materi­als but, above all, of the wooden and lo­cal stone stacking methods, as well as the asphalt dumping. With all this, we were showed the way of acting in every zone.
Digging deeper into this idea, we pro­pose the possibility of generating a con­temporary construction system of the re­gion itself. This is a system involving a cooperation between craft workshops and architects, artists and businessmen; some of them take part into the new en­trepreneurial companies area.
The constructive logics of stacking are provided as an intuitive intellectual re­source that links tradition and contemporary architecture, a way of building the future of the region upon the construction innovation.
‘New Dubied’ architecture would be wo­ven with forest and mountain, woodsaw and quarry, wood and stone storages. It is that same net that would generate ex­changes between different professions and it would also bind producers and consumers, workers and visitors. As a re­sult, the landscape would finally weave a biocultural resources net retrieved from the specific site.

The Dubied Company, which had been dedicated to the manufactering work of weaving machines, set the pace of development in Couvet for a cen­tury and a half until it closed down in 1988. That last day, the stop of the last working machine took away the sound that had organised the whole life of more than 2000 workers. Some years later, that rhythmical sound of progress seems to contin­ue, not just in its inhabitants memory but in the dreams of future of a new city.
The watchmaker tradition of Valsdetravers has survived over the centuries, changing with the times and projecting that tradition towards new products: micromechanics, microtechnologies, pharmaceutical products… The attitude during the fondation still remains the same. The ability to act as a production and exchange landscape in very different ways is what define this region. The natural resources are extracted and processed for the population benefit. In that way, water, stone, wood and asphalt become building elements for the natural landscape as well as for the city ar­chitecture. Besides, these resources are trans­ported in such way that a material exchange net is created in the region. This net is able to estab­lish ties which transcend borders. In that sense, knowledge makes the same way. Human resourc­es are the basis for a crossborder exchange that has built an organised work and enterprising cul­ture, linked to its watches rhythms, its sewing ma­chines, etc.

The silence of the last piece of the assembly line seems to unleash other kinds of process, even quieter than before.

The production process and their connections built the landscape, tangible and intangible, phys­ical and mental. However, this production and ex­change landscape are in a constant change and adaptation. That is the real Vals-de-Travers heri­tage, a relational and process concept which can be adapted and transformed. Couvet develop­ment, for example, was a direct result of the Du­bied factory. As the factory spread over the right bank of the Areuse river, the city grew in the same way, over the hillside.
Nowadays, several companies have settled in the Lechere industrial area, to the east. The watch­maker Cartier is building there a factory that will eventually employ hundreds of people and new railway stations are in project phase. The sto­ry seems to continue and contemporary rhythms appear to remember the past way of things: the growth is starting out again in the industrial area, that place is once again the epicenter of the trans­formation that will lead to the new Couvet site.
It seems as if the future had colonised the east area, so we wonder what will be the future of the old Dubied plot. A wide range of cultural and business activities (such as activities related to Lechere, high end artisans, subcontractors, artist studios or companies) can help the required reno­vation of the area. Over time, industrial buildings, workshops, warehouses, technical and adminis­trative premises have been enlarged, converted or demolished. All this situation involves the laby­rinth where the present project is.
We think that these fragments of architecture and infrastructure can be considered as a chang­ing heritage that requires a guideline for its evo­lution. This heritage means more that making the traditional distinction between buildings to keep erected and buildings to be demolished. It’s a her­itage where fragments are as relevant as the pro­duction relations. In this exchange context, we consider that an argument joining the pieces of a past dramatically interrupted with the emergency future is needed. This is the tissue with which the ‘Contemporary Dubied’ should be built.